A few weeks back, MCM Mama and I were having a conversation on Facebook (because isn't that where everyone has important conversations nowadays?). And she mentioned that she was thinking of hosting a virtual race. She had planned on offering a couple of distances, including a 40K for, and I quote, "crazy people like you."
I took it as a complement and instantly agreed to run the 40K. I mean, it made sense. I'm marathon training right now. And who doesn't love an extra 20+ miler tacked on to their schedule. Then there is the fact that it's virtual, so no pressure. Plus, MCM Mama was flexible about the race date. She allowed (is allowing) racers to fit the event in where it works with their training schedule, which for me was yesterday.
So, here's how it went down. Knowing that I would be deviating from my scheduled 18 miler, I skipped a shorter run this week, so that I could tack the mileage onto my long run and still keep my weekly mileage the same. (I may be crazy, but I am not stupid.)
Up next was planning my route. In order to finish running before the heat arrived, I planned on heading out at 5 a.m. This posed a problem when I was determining my course, since I don't like to leave my neighborhood when I am running alone, in the dark. So, I set up a 10K course that I would repeat four times. This also allowed for a water/fuel stop every 6.2 miles.
I woke up at 4:45, but I had a hard time getting motivated. When I finally got out of bed, I got dressed, (check out my new Back Pocket Sports tank - a review and giveaway are in the works) and grabbed a white chocolate macadamia nut Clif Bar for breakfast. 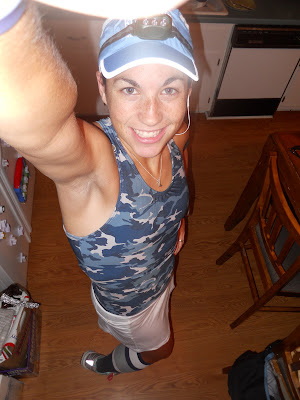 Then, of course, I had to check my email and Facebook. And before I knew it, my 5 a.m. start became more of a 5:40 a.m. start.
I'd like to say that the run was exciting and super eventful, but that would be a lie. Each loop was pretty much the same. Not shocking, since it was the same loop over and over. Here I am after each of the first three 10k loops. 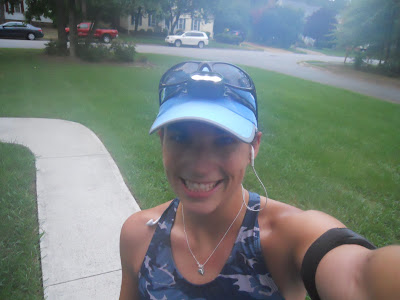 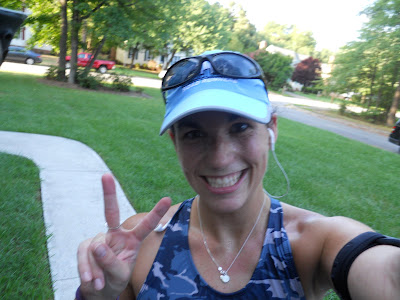 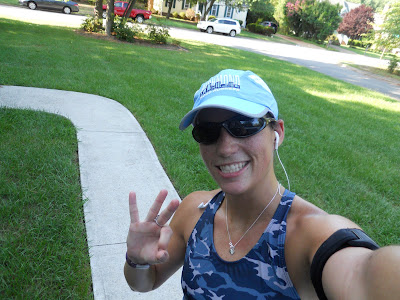 After the third loop, I couldn't mentally handle the same route again, so since I have an in with the race director, I had the race moved to my treadmill for the last 10K. 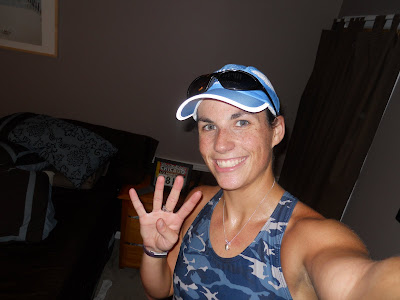 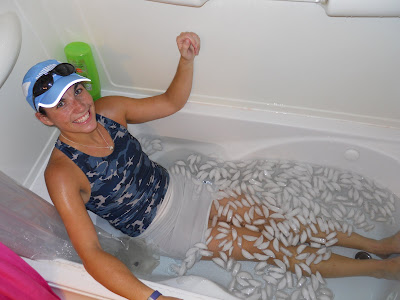 And a post-run meal consisting of water and a white chocolate raspberry cheesecake cupcake. Delicious ... 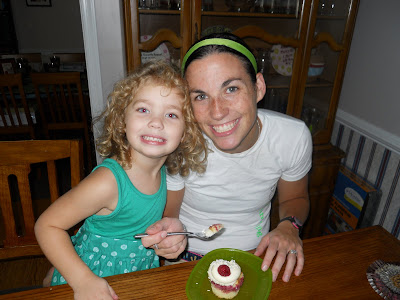 And I capped it all off with a trip to the Nike Outlet - which is reason enough for me to run that far.
Posted by TMB @ RACING WITH BABES at 8:54 AM

You? Are amazing! And crazy! And there will definitely be a prize heading your way.

glad to hear you are crazy and not stupid. Heehehee you are so inspiring! I just don't know if I can hang for 24.8 miles before the end of August. You made it look great!

I love your outfit!...oh abby saids she does too.

AWESOME! While reading your post I am imagining the 10K I ran last weekend....repeated 3 more times! Yikes! Excellent job, and that cupcake looks deeeelish!

I am inspired and amazed! You look awesome doing it too :)

You are such an inspiration!!!!

Awesome! I couldn't handle four loops around my house - but I have thought about doing it when it's cold and miserable.
And, what a great reward; I'm all about trips to the Nike Outlet!

Woohoooo! Great job! :) And you're so brave for taking that ice bath! :)

You really deserved the cupcake and going to the Nike outlet!

WOW! Makes my 2 mile hike and 4 mile run sound like NOTHING! But then again, give me a year or two, and I may (MAY) be as crazy as you. You have definitely taken your love of running to the next level! AWESOME job!

amazing!!! great job! I did my first ice bath a couple weeks ago. TORTURE. It took me about 20 tries just to get in the tub.

you are awesome and nuts! I think that might be the definition of a runner :)

Am I the only one that finds it completely ironic that you got ON the treadmill to break monotony???

I cringed just looking at the picture of you in the ice bath. My day is coming! I'm already dreading it...

I might run that far for that cupcake and a trip to the Nike Outlet.

What did you think of the icebath?

Glad you had the in with the race director so you could change the route when needed. And glad you run smart and safe!

You are crazy to do that just for the fun of it, but it looked like you had a great run! Love the ice bath picture in your clothes...ha ha!
Yum...you definitely deserved that cupcake!

i ran 14 this morning and was thinking of you the entire time. my quote to my friend was, "if tonia can do 24 by herself we can do 14 together. you definitely rock!

Holy crap - 40k! I can't even imagine. You're freaking awesome!

Sweet run!! I laughed at your comment about checking email and FB before your run...I do the same thing and end up leaving much later than planned!

Wow... I am honestly jealous hehe i bet you were so proud and you should be i cant wait to start running long distances after the birth of my child :) you are a true inspiration :D

congrats non-crazy lady! You did awesome and loo phenomenal -- go you!

Nice job getting it done! It would be hard for me to finish up on the treadmill. Way to go!

I would be dead on the side of the road. And there you are just as beautiful as ever in every single picture like you didn't even run a mile. LOL!! You're amazing, great job! (PS. LOVE.THE.SOCKS.)

Wow, you're amazing. And you make it sound so easy! lol

you my friend...are amazing. ps i want that top. thanks.

Holy Cow - that is a long run. I ran 11 miles today, in preparation for next weekends 1/2 marathon. Totally love the top and skirt.

OMG that is amazing....you are amazing!

Dang!! That definitely wins a hardcore award. I saw your dailymile and I was like WHAT?!

way to go! love the ice bath pic. you are looking very skinny...come on now and eat a cookie!

LOVE IT! Doing mine on Weds/Thursday!!!

OMG I love this post. I'm favoriting it on my site. Your post-40K routine sounds like heaven :)

I LOVE this! I saw you FB post and was blown away! I ONCE ran 24 in prep for a marathon and vowed never to do that again! You are crazy!
AND! Your FIRST ice bath? Really? I LOVE them! They will become your new BFF, I promise!
Happy Monday girlie!

Nice work on some crazy mileage! You've earned that cupcake and much more!

You sure look happy in your ice bath. Pretty sure I'm never smiling when I get in one.

I know I should be drooling over the cupcake, but in truth, I'm more excited about the nike outlet trip!!!

I have been to chicken to try an ice bath. Hope it helped with the after-run effects! The cheesecake sounds delish, btw

Ice bath! Nice! I can only had a really cold shower.... so far. But the ice has been sounding more and more tempting this summer!

Wow. I don't know if I'm more impressed with your running skills or photography skills. You got the whole body shot down pat!