Mud Pie. (also known as the You Go Girl! Half Marathon Recap) ...

Disclaimer: I am in no way going to do justice to my trip to Seattle and the AMAZING time I had. It was AWESOME, SPECTACULAR and TOTALLY FUN. And my recaps (today - the race, tomorrow - the trip) can't possibly include everything I want to, unless you want to read a novel.
So, here it goes. The You Go Girl! Half Marathon Recap ...
The Expo: On Saturday, Mel, Jill, Katye and I went to the extra mini race expo. There were just a handful of vendors, but I did pick up some super cute tees from Banana Blossom Press for me and my girls. You should totally check them out.
Pre-race dinner: Bloggy Meetup at The Old Spaghetti Factory. 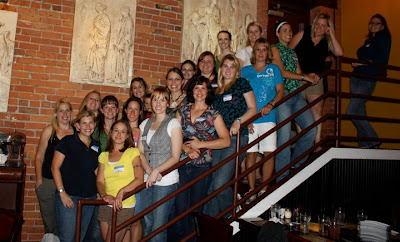 Pretty much everyone ordered some sort of pasta. Except me. I was so full from lunch that I ordered only dessert - MUD PIE. Mel was less than pleased with my choice of pre-race dinner. I told her it was the key to my speed.
Race Day: My SUPER AWESOME pacer Mel and I woke up to rain. Not completely unexpected for Washington, but I was kind of hoping we would get another awesome weather day like we had on Saturday. Anyway, Mel and I got ready and were picked up by the lovely Janna to head to the race.
The race plan was simple. Meet up with our team (Will Run For Ice Cream) before the race. 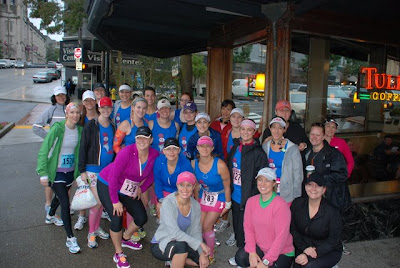 Then head to the very front of the pack (Mel and I are on the left side - I'm directly behind the race winner. You can really only see my socks). 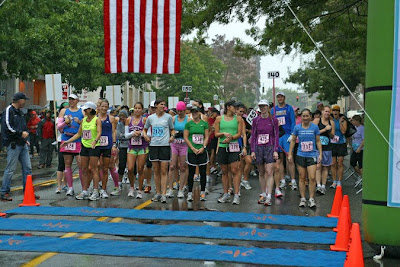 And once the gun went off, we were going to run at exactly an 8:33 pace for the entire race. 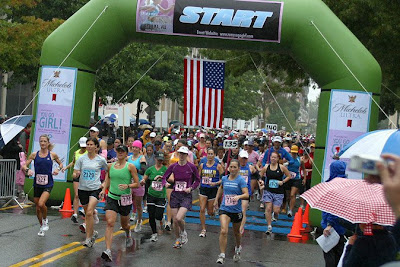 Well. That was the plan anyway.
I didn't look at my Garmin the entire race. I was putting my faith in Mel. I knew she would get me to a PR. Well, 8:33 didn't really happen. Mel let me take the lead and I had fast legs. Our first mile was a 7:58. Um, yeah. I don't run that fast. At least not for 13 miles. But, I was blind to it and I am sure Mel thought she was banking us time by not slowing down (which she probably was to a certain extent).
I was feeling great in the early miles. We passed Zoe when we were around mile 2, where she snapped this picture. How great do we look? 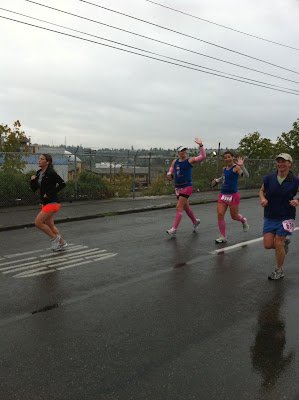 Looking at the race elevation, we knew that miles 3-4 were a climb. We slowed slightly, but were still fine on pace. Plus we *KNEW* that the course was downhill or flat after that. We would make any lost time up. Too bad, we were wrong. The rest of the course was not flat. Yes, there were flat portions, but there were also killer hills (known as overpasses) too.
I was still feeling OK until about mile 9. I was working as hard as I could and even snapped at Mel because I thought she was going to tell me we needed to pick it up. (I was super nice about it though). Honestly, I don't remember much about the last few miles. I was having a hard time getting a deep breath in and was kind of wheezing. And my mile 12.5 all of my energy had been transferred to my legs, keeping me from being able to open my eyes. (Seriously. Mel had me throw water on my head.)
But, the course finished downhill. When we rounded the final corner and I saw the finish line, I booked it, leaving Mel. My final kick clocked in at a 5:05 pace, not really sure where that came from. I crossed the line in 1:58:02, a 3:34 PR!! (I also set an unofficial 10 mile PR by 2 minutes during the race).
And I couldn't be happier! Mel was amazingly supportive on the course (even though she was under the weather) and I finally got my sub-2 hour half. Yes, we didn't hit our "goal" time. I know I went out too fast and it crushed me at the end. But, as you can see from the smile on my face, none of that mattered. 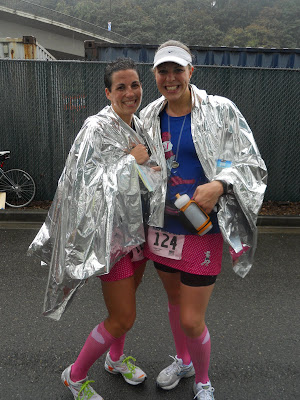 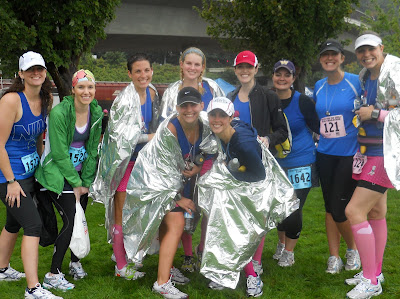 Congrats on the new PR! You did an awesome job! I guess Mud Pie is your new pre-race meal. :) I'm glad you had such a fabulous time!

Sounds like a great race run really well. Congrats on a sizable PR and a lot of great memories getting it.

Sub 2 hours is a great club to be in! Way to hang in there the last 4 miles and pull it off!

Look at all you fabulous women!!

What a great event.

Congrats on your new PR! You are amazing! Love the photos too. Glad to read you had such a great time. :)

BOOYEAH! Awesome on the sub-2! And I *know* you have an even faster half in those legs of yours. Your training is paying off big time and I can't wait to see you kick some marathon butt in a few weeks!!!

Happy tears in my eyes for you!!! Way to go! You and Mel rocked it! So proud of you!

You did AWESOME. I remember seeing you between mile 9 & 10 and I knew you were going to do it. Great job. It's so exciting when you come around and see the clock and you know you are going to PR, best feeling.

I'm a little depressed that you are gone...hope to see you soon.

Great job! Congrats on the awesome PR! 7:58 in the first mile? Whoa!

Way to hang on at the end and break 2 hours! Congrats!

Awesome! New PR by 3:34!! I loved reading your recap and the emotions you were feeling during the race. Looks like an awesome meet-up with so many runner-friends as well. Very proud of you!

There you go! I knew a sub 2 was in the cards for you. Congrats!

Getting the PR is awesome! Getting to hang out with all of us, even awesomer! I loved getting to meet you and you are so much cooler than I ever could have expected! You should consider a move...great job!

Congrats on the PR! Awesome kick at the end!

Congrats on the PR girl! Sounds like it was a great time!!! :)

YAYAY!!!! good work on sub-two! that's so awesome. looks like you girls had a blast. and nothing beats a weekend with friends and earning a PR. good work!

Thanks for inspiring mommy runners from coast to coast.

Great job!! I often have trouble starting too fast. I'm working on that, though.

Congrats on the PR! Great job!

So nice to meet you!

So glad you had a great trip and nice job on your PR!!

Great job on the PR! Way to hang tough on the last 4 miles!!

I am so happy for you! You did awesome and WAY TO GO with breaking 2 hours!

awesome job on the big PR! that is a lot of time to take off on a half marathon :) you guys did great out there, so fun you got to meet all the bloggers!

Looks like an awesome time and congrats on your PR!!! Sub-2 is my "long-term" goal. I'm pretty far from that now. ;-)

I love that you were so focussed that you cant remember anything, that's my girl!! You ROCK and you have so much more in you. On a great day when you are rested, the weather is great and you are in the ZONE you will ZOOM even faster.

Thanks for hanging with me as I LEARN how to pace coach and motivate.. I learned a lot on that race.

Hugs come back soon Friend!! Or Maybe we will meet in the middle somewhere..

Congrats on an awesome race, yet again! Sounds like you had an awesome time with a lot of cool peeps out there!

Looks like an amazing time and congratulations on the new PR. That's still an absolutely wonderful PR even if it wasn't your ultimate goal...great job!

congrats on the massive PR! You girls look like you had SO MUCH FUN in Washington! Can't wait to read more and more about it!

Woohoo! Congrats on your PR! You did awesome! I loved reading your race report as well as the others! It looks like you all had such a great time!

You are such a rockstar!

awesome! It was great to meet you although I'm sure you just remember a blur of faces that weekend.

Congratulations on your PR.

Great job... glad to know I am not the only one who goes out way to fast.

Be happy with that time... over 3 minute drop ain't too shabby.

Be proud girlie! You EARNED that PR! You both did amazing! I'm so very happy for you!

Time to change your sidebar!! Woo hoo for a new PR - congrats on a terrific race!!

Trip looks hella fab. Congrats on the sub 2 ... makes me realize how far I still have to go. *sigh*

Awesome job girl on the PR!! You totally rocked it! I know you are so proud...I guess that Mud Pie really is the dinner of champions..;)

Love the race recap and congrats on the PR!!

Great race T!!And holy moley mile one 7:58? CRAZY! And you got to have the full PNW racing experience! I think days like that are the best for racing!

It was great to meet you AND I have read your blog! I just didn't recognize you with the hair cut!

Congrats on your PR - sounds like an amazing experience!!! Great job!

Way to hit that PR! You're my hero!

Congratulations! You did an awesome job!

YAY! Congrats on your PR :)

Congrats on your new PR! You guys rocked! and most of all... it looks like you had a blast doing it!

You're amazing! This so inspired me to kick up my training. You look like you had an awesome time! Congrats!

heck ya congrats on your sub 2 AND PR!! Way to go!! It's way too easy to go out too fast. Most everyone is guilty of it. :p Congrats again!

WOOT! I have that KICK on video, too! You were awesome, TMB!!! Congrats again on your new PR. :)

Congratulations on your new PR!

Congrats on your sub 2hr half

Congrats on your sub 2hr half