It's official. My kids are runners. This morning Dizzle ran her first race - The Tiger Trot One Miler. And Doodle was so jealous (crying and screaming - typical Doodle), that she became a last minute entrant in the Tiger Trot Half Miler.

It was perfect. We looked fantastic. 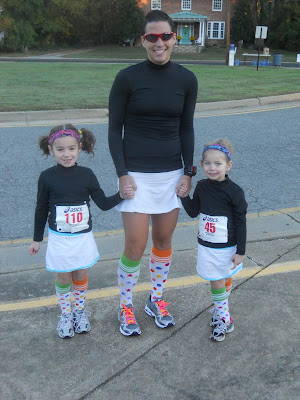 We had a blast.
The girls ran every step.
They were fast (at least for 3 and 5 year olds).
Smiles were all around.

The only negative was that it was COLD. Like Arctic cold, at least it felt that way. (OK, it was 37 degrees - which is only cold if you live in the South). Seriously, look at the girls pre-race ... 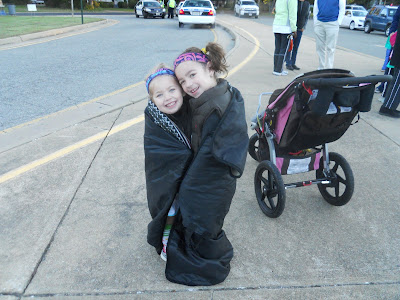 Dilly was bundled up too ... 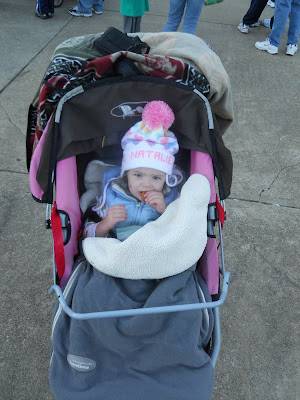 Other than the bone-chilling temperatures, the race was a success. Dizzle (age 5) finished her mile in 12:08 (16 seconds faster than she's ever run a mile before). 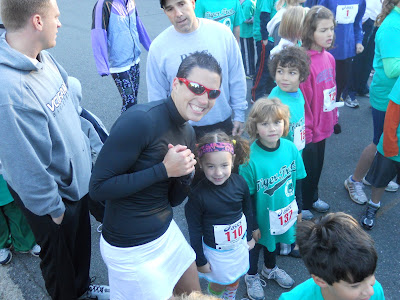 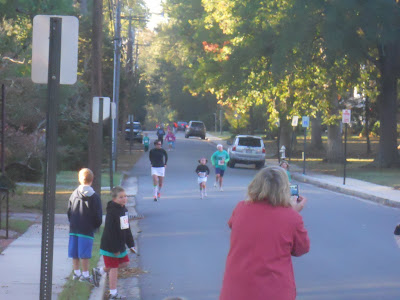 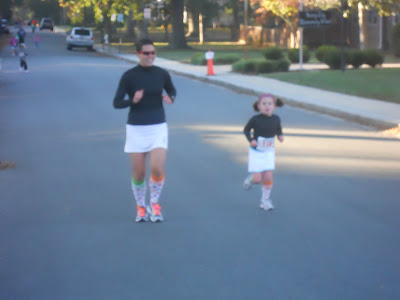 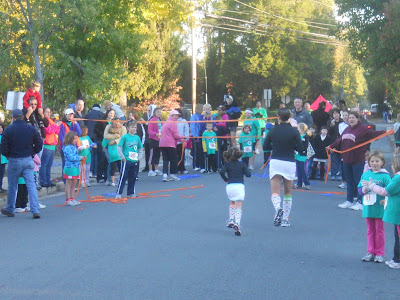 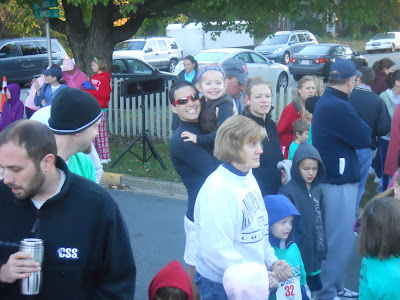 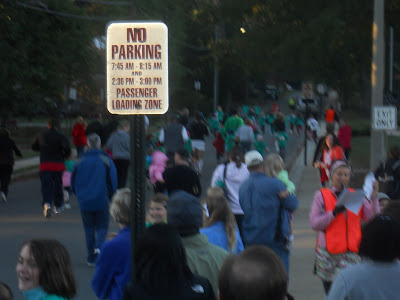 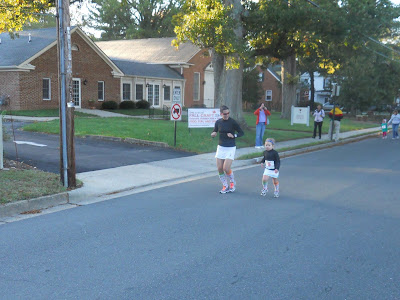 And since it was their race, I figured they should write the recap. Except that they don't quite have a way with words like their mother. So, instead, I debriefed them on the race. Here's what they said ...

What was the best part?
Dizzle: "Getting to the finish line."
Doodle: "Winning." (apparently she missed the fact that tons of people were ahead of her)

What was the worst part?
Dizzle: "When we started to slow down."
Doodle: "When my fingers got really cold."

Would you do it again? (not that they really have a choice)
Dizzle: "Yes! But, next time, can it be in the Summer?"
Doodle: "Yes! But, it has to be longer for the next race." (I think I have an endurance junkie on my hands.)
Posted by TMB @ RACING WITH BABES at 9:40 AM

ahaha this is awesome! LOVE the outfits. The socks are flipping fantastic!!

Nice work on getting your kids hooked. It's awesome to see moms out there running with their kids!! :D

Congrats girls! I will be looking for them on Daily Mile :)

One of my favorite race reports ever. You guys look great. Way to go Dizzle and Doodle!!

You guys look too adorable!

Congrats to the girls :)

PS - I just showed this to my 4-yr-old and she asked: "Why don't the kids get medals?" Apparently it will be all about the bling for her.

You three looked adorable. And, 37 degrees is freezing cold here in the Northwest too! We ran in gloves, hats, long sleeves and running tights at that temperature last weekend. You girls are tough!

Yay! That is so awesome! Congrats to Dizzle and Doodle! And, your outfits were super cute!

ok i can't get over how cute this is. how awesome is it going to be when they are olympic athletes and you have this post to look back at.

ok i can't get over how cute this is. how awesome is it going to be when they are olympic athletes and you have this post to look back at.

You guys looked so cute! looks like you had tons of fun.

Those are awesome pictures! I look forward to when I'm a mom being able to do races with my kids. That's really cool!

Love the recap from the girls' perspective! Soooo awesome that they've caught the bug and they did so good!

Awesome! Good for them!!! THey must be so proud!

that is adorable! congrats girlies!

Absolutley adorable! Great job to Dizzle and Doodle!! You all look great in the matching outfits!! You rocked them!!

So cute - love the outfits, love the pictures of you pacing your girls and I especially love their recaps!

Totally adorable!!!! Congrats to Dizzle and Doodle...they did great!!

Oh my gosh, so cute!

OH. My. Goodness... could you all be any cuter? Smokin' outfits and smokin' fast times. Awesome job Dizzle and Doodle... you DID win.

Congrats to your girls! You all look adorable!

that i 1 of the best things have seen in a while-made me smile :)
that is one cute cute trio of gals!

This is by far the cutest post I've ever seen in my life!

Love it! You so have some runner on your hands :) Love the matching outfits too.

What fun! Glad the girls had their first chance to race and blog. You better watch out!

Definite vote for mom-of-the-year. LOVE your outfits!! Too cute. Sounds like a fantastic time. I'm completely jealous - your 5 year old ran a mile a minute faster than I do (wow - I'm getting my butt kicked by a 5 year old). Give them high 5's for me.

Very cute! Your girls are adorable and I loved their answers to your questions. You've made some great memories there!

OMG OMG! The picture of the 3 of you is sooooo adorable! I see there are 2 more runners in your family ;)

Oh I have to ask, what brand are those socks? Where do you get them?

I just could not WAIT for this race recap. Thank Dizz and Dood and keep up the AWESOME running, kiddos.

LOVE IT! You must be so proud! Way to go girls!

Love the outfits. Love the spirit of your girls.

Awesome. Congrats Dizzle and Doodle. Awesome jobs on their races.

You all look terrific!!! Looks like a great time!

I'm pretty sure I've mentioned before my fear of children. But seriously seeing your post and the pics and reading it was all so CUTE! It seriously almost brought a tear to my eye. What a beautiful family you have and so awesome you are sharing your love of running with your girls!

So freaking adorable! I love that the 3 of you matched :)

so stinking cute! love the outfits and the kids did wonderful!

I love the outfits!!
Doodle is just like my wee girl. She feels the kid triathlons are way too short for her abilities. I love that they love to run!!

That is so great! And you guys do look stinking cute! I hate that Dizzle is going to be beating me soon!

Can't get over the matching outfits.

Oh girl I can't even tell you how happy this post makes me! I love, love, love that your girls wanted to run a race and you all looked completely adorable! You probably already realize this....but look at the role model you are for those girls. Awesome!

Love this! You are such a great mamma! Glad they enjoyed it!

That is awesome that they enjoyed it so much.

And how cute are you all in the matching outfits!!

This so made me smile and (duh) LOVE the outfits. ;)

LOVE IT!! you all look so cute

The matching outfits are AMAZING!!!

This is the cutest race report EVER! Love it!

omg -- this is awesome!!! you alllook adorable, as usual1

MERCY! You all look absolutely fabulous

Awww, the girls are so cute!! I love that Doodle had to run too. My kids will fight over who gets to go run with me, and I think it's adorable.

The look on the dude behind you in one of the pictures is hilarious.

love it! so funny you have little runners already. Love the outfits, too!

Oh my goodness... how cute are they! I love their outfits and I love their race reports... you definitely have runners in those little girls! Congrats to them!

How adorable they are! So cute to watch you running with these little angels.. Love it! :)

OK, can you people be any cuter?! Love it!

Great interview with your new little runners! And you HAD to be the most stylish family on the course. Congrats to all!