Attached - It's been four days since Ironman 70.3 Texas and I am still wearing my athlete wristband. 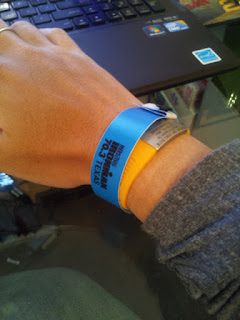 I know I could take it off but I just can't bring myself to do it. I kind of feel like once I do, I am saying that this whole journey is over and I don't want it to be. So, instead, I will just walk around letting people assume I was admitted to the hospital.

Nuun Hunt - Every year at my daughters' preschool, there is an egg hunt. Each family is asked to bring a dozen plastic eggs filled with non-candy items. Traditionally, I fill the eggs with tattoos and stickers, but this year, I decided to shake things up. 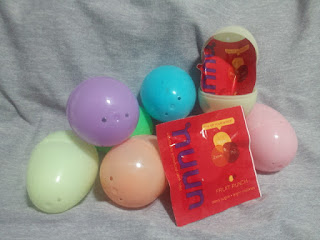 That's right, a bunch of lucky 3-5 year olds will be getting single-serve tabs of Nuun. Not sure how everyone is going to feel about this, but I know Doodle will think it's epic. Then again, we call our car, Nuun Platuun, so maybe she's an anomaly.

Photos - The only time I have ever purchased race photos was for my first marathon. I shelled out the cash because I thought it was the only time I was ever going to run a marathon and I wanted to have proof. And since they were so expensive, I thought I would never purchase them again.

Well, I was wrong.

My race photos from this past weekend were AMAZING. Like the best race photos I have ever had. So, I bought them. Unfortunately, the link they sent me to download them isn't working. So, rather then show you the high quality ones, you get to see what I hijacked from the site. 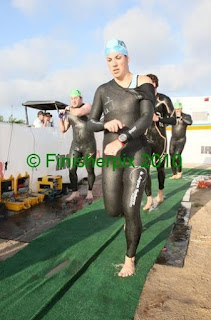 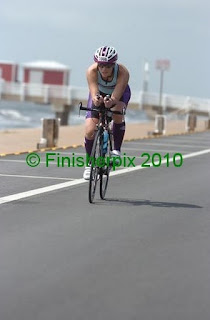 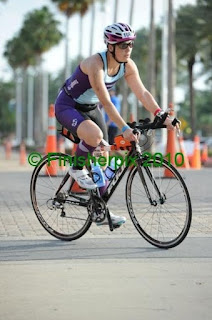 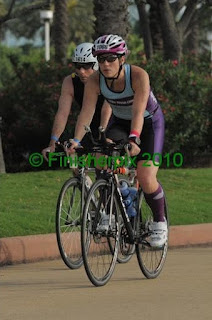 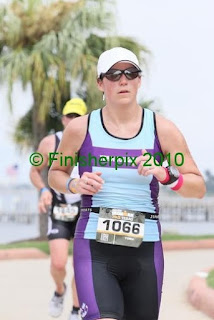 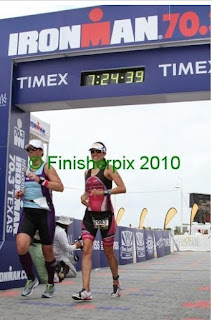 Pretty awesome, right?
Posted by TMB @ RACING WITH BABES at 8:06 AM

totally awesome!! I am dying at the nuun in the Easter eggs......my kids would be stoked and I would think you were awesome for A. given out an awesome product and B. having the balls to put it in Easter eggs!! haha totally want to hear what the kids think......and I would probably laminate the wrist band and wear it like a badge! You earned that sucker!!

I agree, you did get some awesome pics! I would imagine the kids will think the nuun is pretty cool once Doodle shows them how it works. What kid wouldn't want to see their water change colors magically? :)

Ys, they are awesome. Buy them.

How could they not ador nuun! My boys love the stuff :)

I kept my first Ironman bracelet on for like 5 months! :) I get it!

Love the nuun in the eggs. Way better than tattoos and stickers!

Those are fabulous pictures! Definitely worth the money to capture that day like they did!

I love that you put Nuun in the eggs - that's priceless!

You can wear it until it falls off! You deserve to.

Love the Nuun idea. Great to get something better than candy at an egg hunt!

I looove your photos. They really are epic!

Great pictures! They look way better quality than most of the ones I have seen before. And I would probably wear my wristband forever if I completed a 70.3! Wear it loud and proud!

Great pictures! They look way better quality than most of the ones I have seen before. And I would probably wear my wristband forever if I completed a 70.3! Wear it loud and proud!

Those race pictures are awesome.

Our 9 year old keeps his wrist bands on from the water park all summer long. Stacked up on his wrist until they are in tatters. I think you're allowed to keep them on until basketball games, then the ref makes you cut them off.

you will only have one first HIM so that is def an occasion to buck up and drop the cash on non-watermarked pics :)

Good looking pics. I think I hit like on all of them on Facebook but in case I did not just know that I do like them all.

I am the opposite.....I rip the wrist band off as soon as I can because I know that step in the journey is over and I'm ready to move forward to the next one......

you must buy these.
mother's day gift
from you
to you.

I have an urge to bring my kids to your kids Easter egg hunt... Addy would have a stroke if she opened an egg and she had her very own Nuun tablet!

I just got a big smile when I saw you were still wearing your wristband.
Those pictures are awesome. I particularly like the first one on the bike!

Never take it off!
Those photos are great, so excited for you STILL!

Congrats on your race!! I happen to follow the blog of Kelly Williamson who won the women's division that day - here's a link if you're interested:http://kellyhandel.blogspot.com/

I found her blog a few years ago after seeing her win the St. Louis Go! Half marathon. Since you are a triathlete, you might find her reviews interesting!