The Good - After what seemed like an eternity (for me, not you), Nuun announced how our Hood to Coast teams would be divided on Tuesday. Each of the 36 runners was placed on a team, (Morning, Noon or Night) and assigned to a leg. Since we were allowed to give our preference of legs, I chose leg 1, leg 3 and leg 4 as my top three. I really wanted to be in van 1 in order to see other half of the course, as I was in van 2 last year. 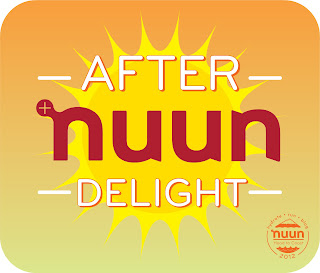 Honestly, it probably wouldn't have been on my top three of van 2. At first I was a little bummed, but all that "woe is me" crap got washed away when I saw the rest of my van. Talk about awesomesauce. I hit the van-mate jackpot and I know we are going to have a blast.

Watch out Team Morning and Team Night, it's on. (I'm so not competitive at all ...)

The Bad -  Yesterday afternoon, I ran out to the store to pick up some groceries. On the way home, I was accelerating from a stop when a car cut into my lane and sideswiped me. (I'm totally fine, by the way).

Startled from what had happened, I quickly collected myself and noticed that the other driver paused just ahead of my car and then started driving again. I followed thinking that he or she was pulling out of the way of traffic so that we could exchange information.

When we got to the traffic signal, I got a bad feeling and pulled out my phone to snap a picture of the other car.

Good thing I did, because seconds later, the other car turned and booked it.

A freaking hit and run.

I called the cops and hopefully they can find the person. Either way, pretty much the entire front right side of the car needs to be replaced. So that's awesome!

The Ugly - I have been growing out my hair for the last few months. I have also been bleaching my hair every four weeks for the past few months. Now, after all that abuse, my hair has had enough. It's pretty much stopped holding color, lost all of it's curl, has a waxy feel and horrible texture. I mean, last night I took this picture after J told me I looked like a troll doll ...

So, like any rational person, I decided to start from scratch. I told J to get the clippers and to shave my head. We thought it was kind of hilarious. So we videotaped part of it ...

Yeah, that happened. Despite how truly UGLY it looked, I really like the end result. 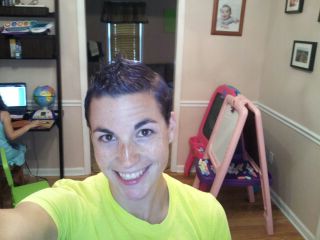 LOVE the end result!! You're so stinkin' cute you could pull off anything, even the troll hair. ;)

And I am soooo glad you are ok after the hit and run. Fingers crossed the jerk is caught!!!

LOVE the buzz/fohawk on you! Although the troll look was kind of rocking too!

Oh to be that brave! I get crazy when my hairdresser cuts two inches off. It's only hair, right? You make short hair look GOOD!

Holy crap, accidents are the worst, even if you don't get hurt. I'm glad you're ok and hopefully things will get resolved with the police!

You can actually pull off the fohawk look girl! Love it.

Glad you are okay - accidents can really shake you up. But your new sassy hair will get you through.

What kind of person does that?? (hit and run...not shaving your head LOL)

You look SO good with short hair. I contemplate shaving mine, but I don't think I could pull it off like you.

What a great van you have!! You are going to love it and I am more than a bit jealous.

I love your hair!!!!! And yay for the nuun teams! You're lucky to get to be with Zoe and Lindsay - I've done a relay with them before and they ROCK! And boo boo boo on hit and run drivers. That's ridiculous. Hopefully insurance will cover it?

People suck sometimes. Who does that?!

You and Gab are hair twins again!!! She's back to the fohawk too!

Glad you took a picture!! I've had a hit & run in the past year. It sucks, but they found the lady in less than a week.

I have so much respect for you and J. Seriously you are doing what you want and how you want to do it and you have support from him to live that life.

That is so awesome and flies in the face of all those that won't do it because they are scared.

Best part of the video: Road ID, Garmin and Tri Shorts while getting the buzz.

OMG I love your hair! I wish I could do the fohawk. My husband told me that I'm growing my hair out now. Haha.

love your hair! Wish I would look that good with it all shaved off.

I've run Leg 7 a few times - they must have put you on it because you are so badass - it's tough. I did a write up on Leg 7 last year when I did a training run out in Sandy - you can see it here if you're interested in a visual of the leg: http://www.kathyjustkeepsrunning.blogspot.com/2011/08/leg-7-in-pictures.html

Sorry about the hit and run - some people are just jerks!

Glad you got a photo of the other driver. People sometimes suck.

I give you two weeks and I'll be seeing your head on FB with another shocking color. You are addicted to changing it and we all love watching you do it!

Good for you for getting that pic. I was in a hit and run that involved significant bodily injury as well as totaled my car...somehow I got the license number and a description of the vehicle. People can't get away with that kind of stuff. I am SO glad neither you nor anyone was hurt.

I love your hair. You have such a great face for super short hair...only really pretty people can carry it off as superbly.

1 - yay for team noon for nuun! i'm so excited and so thankful we are in the same van together! it is going to rock so so so so so much!

2 - so happy you got that photo. what is wrong with people!?!? i hope that the cops can help.

Your new haircut is perfect for summer. Its so hot here that I want to pluck out every strand of hair on my body.

Yikes! Hit and runs truly suck, but at least you got a picture. I was in one and they neverr caught the jerk, even though it totalled my car.
On another note, you look like you've dropped some serious weight in the hair cutting pics! That is something I normally wouldn't say, but with your RMR post and subsequent heavy eating, it is so cool that you have found the right balance!

Ditto to everything everybody said...the other driver is a jerk face, you are so cute with that haircut, and I wish I could pull it off. You will rock leg 7 and I so just want to hang out with you because you seem like so much fun!

It doesn't matter how you have your hair, it always looks good!

Gosh, sorry about the car. What a jerk. Love the faux hawk girl. You can pull that look off and are lucky!!

Van jack pot for sure....bummed I am not with you! Can't wait to see you and hair soon!