The Glow Run - Rev3 takes pride in making all of their events family friendly and part of what goes into that is having events for a racer's support team, such as the LittleRev Adventure Race and the Glow Run 5K and 1 Mile Fun Run.

As soon as I said "glow", my kids were in. So on Friday afternoon, we loaded the kids in the car and headed to Williamsburg for the Team Rev3 team dinner, followed by the race. Since no one has been running much lately, we opted for the 1 Mile Run. 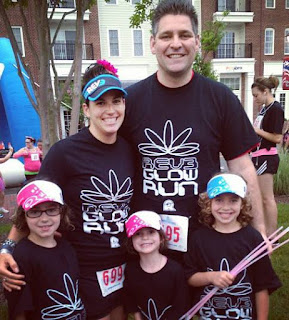 After decking out in our glow gear (which paled in comparison to some people) we headed to the start line. J and I split up the kids and let them set the pace. I ran the first half with Dilly, who runs super slow and then wicked fast without much warning. She was incredibly hard to stay with. Just after the turn around, I switched off with J and ran with Dizzle and Doodle. With about a quarter mile left, they complained that they couldn't run anymore and that they couldn't breath. Somehow, I convinced them to sing "Twinkle Twinkle Little Star" to distract them and they ended up screaming it at the top of their lungs, proving that they weren't all that out of breath.

Just under 11 minutes after we started, the race was over. Everyone had a blast and the kids were already begging me to sign them up for the next one.

Hanging with my teammates - Since J is awesome, he let me spend the whole weekend in Williamsburg, which gave me the chance to hang out with my teammates, as well as, help out at the expo and post-race.
It was a blast. I seriously love my teammates and feel so blessed to a part of this team.

The Swim - If you've read other race reports, you might have heard that the swim was rough. There was a strong current and a lot of chop. I've heard that around 100 swimmers were pulled from the water. I watched the pros swim off-course. But, I didn't have that experience at all. In fact, I had my best open water swim to date.

Since the tide was still coming in, racers were forced to walk pretty much to the first sight buoy. Once I started swimming, I found my rhythm rather quickly. Twenty strokes with each arm, then I would sight. I never really drifted and for the most part I stayed out of traffic.

As I approached the swim exit, I stripped off my wetsuit before exiting the water knowing it would probably save me time in the long run. I glanced at my watch and noted it was reading 33:XX. I was so psyched. Last September, I swam 750m in that same location in 23:23. I never expected to get out of the water in under 40 minutes. It was a killer way to start the race.

The Bike - As you may know, I don't ride my bike outdoors very often. And if we are completely honest, my handling skills aren't the best - mainly because I am afraid of crashing. When I woke up for the race, it was pouring. Part of me wanted to take a DNS because I didn't want to ride in wet conditions.

But, I knew the rain was going to stop and that I could ride conservatively if I had to. And that's exactly what I did. I never pushed the pace. I never got out of my big ring. I never got into aero position. I rode the brakes on the descents. I squeezed the handlebars so tight that my hands went numb. I was a big fat chicken. But, I still averaged over 17 mph. It kind of makes me optimistic for a race where I don't act like a big baby.

The Finish - I can not express enough how excited I was to see that finish line. After being scared for my life on the bike and suffering during the run, that finish line was pretty much the best thing I had ever seen. 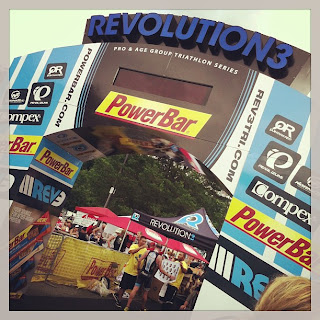 Seriously, just look at my face ... 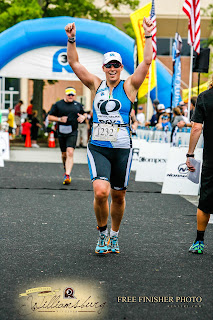 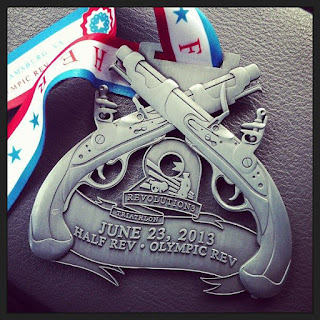 The Wet Conditions - I don't like wet roads. That is all ...

My Nutrition - I knew what I needed to do during this race when it came to nutrition, but I didn't really execute. The plan was to take in about 300-350 calories on the bike and another 100 as I started the run (and to drink Gatorade while running). However, it didn't really happen like that. I had a PowerBar Energy Blend in T1. Then I didn't eat at all on the bike because I was so deathly afraid to move my hands from the handle bars. Knowing I couldn't eat a ton in T2 and still run, I grabbed another PowerBar Energy Blend as I headed to the run course. Two miles into the run, I was done and it was ugly.

My Wetsuit - Basically, I should have checked if the wetsuit, I purchased 25 pounds ago still fit. The answer is not really. At least not well enough to swim in. Fortunately, I have an awesome friend who was gracious enough to swap wetsuits with me for the day.

The Run - I admitted prior to racing that I was severely undertrained for this event. In the last two months, my longest training session was just about two hours long. The thing is that training at an easy pace for two hours is not really the same thing as racing for three hours. Add that to the fact that my nutrition was sub-par and I had nothing left when I had to run. I was just willing myself to move forward and cursing myself for not doing the Aquabike.

The only good thing is that at the end of the day, I set the bar in a place that should make getting a PR at my next race pretty easy.
Posted by TMB @ RACING WITH BABES at 2:21 PM

Tonia, all in all it sounds like a great weekend! Congrats! :)

That finish line picture says it all!! You've had your share of challenges lately...finishing this race proves that you can beat them all!!

I think it sounds like an awesome race.. Minus the run debacle. Learning to race these things is crazy... I just can't seem to do it!