Did you ever have a friend that you were super tight with? How about one that you stopped talking to for no reason at all? Were they ever the same person? I have a few. Most of them, I don't really care to reconnect with. I feel like they served their purpose in my life and there's no reason to keep trying. I appreciate what we had, but now it's just not worth my time. Not to be harsh, but it just is what it is.
There is, however, one exception on that list, my friend Josh. We met at the end of freshman year of high school. We were in the same Geometry class, yet I have zero recollection of him prior to April. Weird, right? Anyway, we quickly became great friends.
At some point during our freshman year of college, I took a train and stayed with him for the weekend. It was just a normal weekend. We didn't have a fight, or at least I can't remember one, but that is the last memory I have of us as friends. I'm not even sure that I ever talked to him again after that. That was nine years ago. And it has kind of bothered me ever since.
Until now. Because yesterday, we reconnected. Despite living on opposite coasts, we both happen to be in New Jersey this week. And after nine years of silence (with the exception of the occasional Facebook comment), Josh asked if I wanted to go on a run with him and catch up while I was in town. (He obviously knew I wasn't going to say no to a run.) So, bright and early yesterday morning, we ran (very quickly thanks to his 8:30 "easy" pace). And caught up. 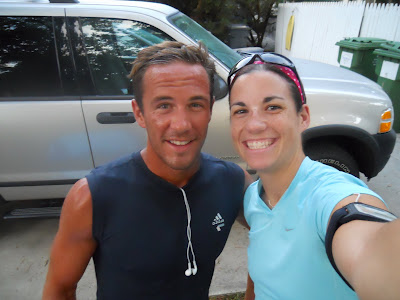 It was really nice and by the time we had finished, I felt like those nine years never happened. And hopefully it won't happen again ...
Posted by TMB @ RACING WITH BABES at 5:15 AM

That is amazing! So nice to reconnect with an old friend! Glad you got that opportunity!

Wow, that's awesome! What a great way to re-connect.

that's great! So glad you two were able to connect!

Great story some people are too good to lose. Glad you liked my outfit in my post, since you were the inspiration for the socks, happy running.

9 years is a long time!! Glad you got to catch up!

Yay, love that the reconnect was via running. Extra fun.

I know EXACTLY what you mean! I met my best friend, a guy named Rusty, the first day of 5th grade! All through school we were inseparable. We spent more time together than we did with our boyfriends and girlfriends. lol Then after graduation... I got married (to my first husband, who was an extremely jealous butthole), and he was in a serious relationship... we just lost touch for like 5 years. Then one day we ran into each other at the gym, and it was like finding a piece of my heart again. It was like NO time had passed. I didn't realize just how much I missed him until I had him back in my life! Those friends are rare. Hang on to Josh!!! :)

Nicole on the run said...

What a lovely way of catching up! Just goes to show you: running brings people together.

Isn't that awesome that you can go from not talking for so long and just pick right back up?! We all need more friends like that! That's the sign of a true friend. :)

hmmmm, i'm horrible cause i have several friends that i'm not in touch with, but we all try very half-heartedly via facebook. we're aware of each other's lives, but rarely see anyone. i kinda wish it would get to the point where we would all just let go...

glad that you guys can pick up wherever you left off. and do it while running: best ever!

Reconnecting with friends is awesome. I love FB for that.

That is awesome. Another great reason to love running!

Sound like a lot of fun. Catching up is the best!

its always great to catch up with old friends!

9 years - wow! That's great you got back together for a run.

I was just thinking of all of the friends that I either lost touch with or stopped talking to. I think it depends on where you are in your life and what kind of friendship you are looking for at the time.

How awesome. Facebook has been great for reconnecting, but only you would do it with a run :)

Very cool! Sounds like an amazing way to reconnect!

I love that! ...and i love that running was what made you reconnect! A great friendship can pick up right where you left off...

It's great to have friends who are able to overcome the time and distance life puts between us. How great that you guys reconnected and fell right back into the friendship.

Sounds like you had a great run! It's always nice to reconnect with old friends! :)