3TT: We are competitive edition ...

In our house, competition is fostered. We don't do things to simply finish. We do them to win. And then we brag about them. For example ...

1. On Saturday, Dizzle is running the VA 529 Kid's Run at the Ukrops Monument 10K. It's her first race since October and she is ready to go. Her PR at this distance (1 mile) is 12:08. She told me this morning that she thinks she can beat 12:00. She also believes she can win the race. I think she can too (well, the beating 12 minutes part). And fortunately, for her, she will have two things working in her favor.

2. She's got a sweet outfit (Note: if it's warmer than expected, we have black knee highs) 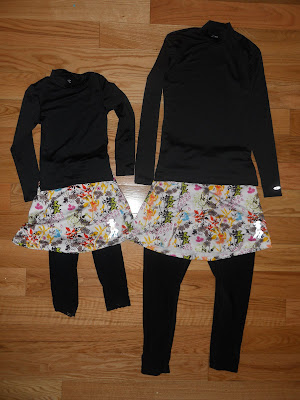 I think the rest of the 5-7 age group better watch out.

2. Doodle is pretty much a soccer phenom. 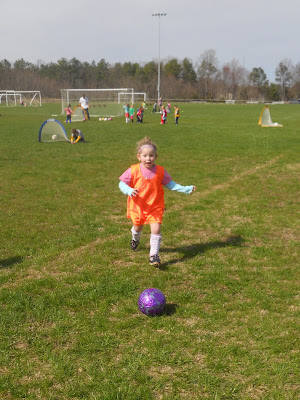 At age four, she's been joining in on Dizzle's practices for the last two years. And it shows. She's got speed and agility and wicked footwork. We've had other parents suggest we have her moved up an age group. Um. No. I'd much rather have her dominate. Thank you very much.

At practice on Tuesday, Doodle was playing like normal, when suddenly, she was all out crying. Like inconsolable. She ran off the field. I hugged her and thinking she was hurt, I asked her what was wrong. She replied, "I ONLY scored two goals. And I wanted to score six."

Seriously, Doodle. Did you not realize that you were the only person who scored any goals? Hello, overachiever ...

3. Speaking of overachieving and domination, J had an off-site meeting yesterday followed by a bowling tournament. Yes, you read that right, a bowling tournament. Like the rest of us, J takes competition seriously. And of course, that focus paid off. His team won and they all walked away with the cutest trophy ever ... 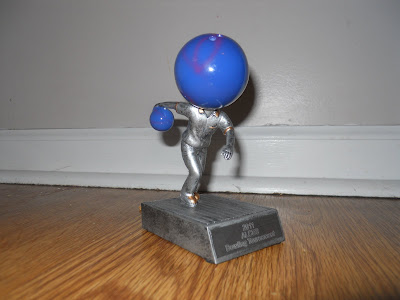 I just found your blog and love it!

I think your family has a problem. :-P

Have fun! My oldest is 4 and I am hoping to find a kids race for him this year!

Oh. my. word! I love the matching outfits! I feel like this is going to be our family! Emma is always trying to be first. We have our first race together this weekend...we'll see!

Good luck to Dizzle! Sub-12 for sure and she'll have the best outfit (and pacer) HANDS DOWN!

My son has his first race of the year on Mother's Day and he asks EVERY WEEKEND if it's race day yet. I am running a short race that morning too and then with him. I wonder if I can find something to match with him....

You guys are nuts, but I love it!!! Good luck Dizzle!

Ha! I love that she ONLY scored two goals... sounds like something my younger one would say too. Love those racing outfits! You gals are gonna rock the sub-12!!

"I'd much rather have her dominate" made my morning. :)

Y'all are going to look ADORABLE for the race! :)

Haha love the competitiveness and the outfits for the race!!!

I think it's great. I think the whole "we don't keep score" at kids' events is BS.

And I loved your comment on Sweat Once a Day regarding race times.

I love the race outfits and can't wait to see pictures!

You guys are great. Love the outfits!!!

I wouldn't want to face your family in a race...or a dark alley.

Your family is crazy competitive! can you take mine for a month and work on them? really, I'm serious.

okay LBM might be okay but the rest of them need so serious work.

I loooove the Doodle has been practicing with Dizzle. Do you coach? How did you work that out with the coach. LBM is bugging to join S'ghetti's practices. Maybe a younger division would allow him to join in??

OMGosh the matching outfits are AMAZING!! My daughter's birthday is in August so she will either be the youngest in her class or one of the oldest if I hold her (cutoff is 9/1, her b-day is 8/27)... the reason I might hold her is a year makes a HUGE difference in athletics come middle/high school...

Love love love it all! Your matching outfits are adorable! Where on earth did you find matching skirts for girls/women? I was just thinking the other day that I need to start sewing again so I can make the girls and I matching outfits!

Love the matching outfits! And those other runner's better watch out!

How do you say "take no prisoners" in Latin? (Could be the family motto)

haha.. we have a competitor in our house. Turn anything into a competition and Addy is game. And I also dig that trophy.

I laughed so hard at you not moving her up in soccer so she could "dominate"...
Good stuff TMB! Love reading about your family.

GOOD LUCK DIZZLE! Love the outfits! The only thing that would make it better would be mother-daughter "I Run" shirts...sorry had too!

Haha. I love this post. Your girls (and J's bowling trophy) are absolutely adorable.

There is never a dull moment in your organized, clutter free household with the 3D's!!

I CANNOT wait to see pics of the running outfits!!

I'm a bowler - not sure if you knew that - but it's damn near impossible for me to turn off my competitiveness and bowl 'for fun'. Our team has had two bowling-team-events in the last 6 months, and it's been hell.

Love the outfits - it's like you have a "mini me". Good luck on Saturday - how much fun and how exciting!

those outfits are AWESOME!! love it.

hahaha! these are some SERIOUSLY awesome accomplishments! great family!

overacheiver?cant imagine where she gets that from..

That bowling trophy is awesome!

I love it! Goodluck to Dizzle on her race!!

You guys rock!!! Good luck Dizzle! You are going to do awesome. :)

Hysterical - but true post! Love love love competition! Two co workers raced recently - a 5K. They told a different co worker - who knows me much better - wish Andrea had been there -she would have slowed down to run with us. My friend guffawed loudly and said - not a chance!

Love the outfits! Love the comment about not moving her up, let her dominate! I'd love to play some board games with you!

Your kids are the best! I love their attitude and competitive spirit. Wonder where they get that from....

Go Dizzle! I feel a new sub 12 PR coming on ;) Doodle... You can go wrong with age group domination on the soccer field! :)

Good Luck and have FUN! I can't wait till my 21 month old can get into these kinds of things. I played Soccer since I was little and I've got Bman already playing with me but they won't let him on the team b/c he's too little though he is the size of 3 and 4 year olds. Maybe just lie about his age. LOL I LOVE love the outfit for the 10k.

"Um. No. I'd much rather have her dominate. Thank you very much."


"I ONLY scored two goals. And I wanted to score six."

Hil-Arious!! You guys are a riot! I'm glad I'm not in your children's age group - I'd get trampled!

I love the outfits!!!

I was a hard core bowler during college, and when I won "trophies" in tournaments they were girly fountains. That trophy is AWESOME!!!