Last week was the final peak week of this training cycle. As of today, I am officially tapering. But, like I said, last week was a peak week, which meant lots and lots of running. I had 56 miles on the schedule (plus five sessions of P90X Ab Ripper X). And a husband who was out of town from Monday until Saturday. Fantastic!

On Monday, I rested. After a weekend filled with lots of excitement, little sleep and a new half marathon PR, I needed a break.

On Tuesday, I hit the treadmill for six miles. Easy pace. Nothing special. Just wanted to shake the post-race soreness I was experiencing.

On Wednesday, it was back to the hamster wheel for the now infamous 22 miler. I knew that if I didn't get my long run in early in the week, I was going to have to spend my first day with J in over a week running and recovering. So, I did what any less than sane individual would do and ran three and a half hours on my treadmill while watching NCIS.

Most of Thursday was spent debating whether or not to run. I had a rest day to play with, but I wasn't sure if I would "need" it later. I opted not to take it, and ended up logging four miles before I was interrupted.

Friday was definitely going to be a rest day. Definitely. Well, it was until I logged onto DailyMile and realized that thanks to the four miles that I had run the night before, I would be able to hit 60 miles for the FIRST TIME EVER as long as I completed the rest of the miles on my schedule. I had to channel my inner Katie A.

I mean, how could I say no? It's not like I was going to stumble upon this opportunity again any time soon. After National, I plan to bring my mileage back down to the 38-43 miles per week range. I NEEDED to do it now. There really was no choice.

J FINALLY got back on Saturday and I was able to sneak out for a late afternoon run with my friend, Earth Momma Mer. 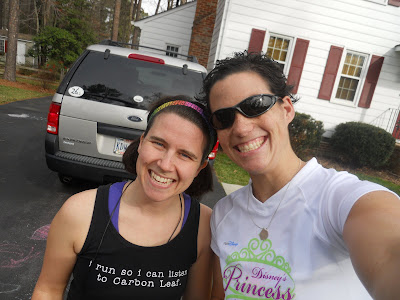 She wanted someone to join her on the first six miler of her training plan and I REALLY wanted to run outside. It was perfect. And we took this really sweet action shot ... 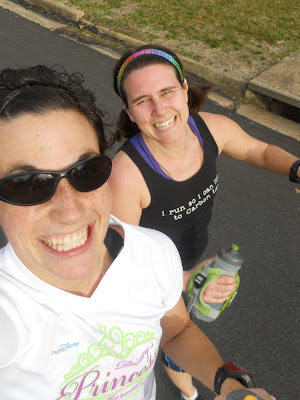 Then, yesterday, I was scheduled to run 12 miles with the Posse. It was supposed to be extra rainy, but instead it was just extra humid. It was totally one of the worst runs I have had in a long time. And to top it off, the last mile was straight uphill. Like bring you to your knees, uphill. It sucked. But, it kind of ROCKED too. Because, no matter how much it hurt at the time, once I was done, I got to post it to DailyMile and saw this as a reward ...

6 days. 60 miles. 100% sheer awesomeness. And to think, this time last year I would have told you that running 30 miles in a week was impossible ...

p.s. Are we DailyMile friends? Because we totally should be. Just click HERE
Posted by TMB @ RACING WITH BABES at 6:48 AM

I had a 60 mile week too (probably because we both did ridiculous wednesday runs!). Way to go! I just friended you on Daily Mile.

you are insane...in an incredibly wonderful way. i want to be you when i grow up!

I just looked at that graph and thought hmm maybe I should be doing Daily Mile.
Love the Disney Princess shirt and congrats on the 60 miles. I have ever hit it but don't know if I will again.

Great job. And you ARE. AWESOME!

Only word for that is AWESOME!!!

Awesome...awesome...awesome job this week! Isn't it amazing how we can just push and stretch out bodies to do amazing things. 60 miles in 6 days is SO amazing!!!

Congratulations, that's really impressive! Right now getting into the 40s is a lot for me, but maybe someday I will make it to 50!

I am SO impressed! You totally rocked the mileage this week. And I love following you on Daily Mile. I get so motivated by what you do! Keep up the good work.

SIXTY miles?! in six days?! You are so very awesome I can't even take it! What's your goal for national? I'm so excited to cheer you on for it!

bomb. way to stack it up, sista! you're going to crush national.

You're totally my hero.

And check out that super awesome shirt.. Man, I wish I had one. Oh. Wait.

Great job! I have 53 to do this week and I love the high mile weeks. Enjoy the taper!

Congrats on a great running week! It's so nice when things fall into place and you are able to hit new milestones. I can not wait to see what you do at your marathon!

I love DailyMile! It's much fun! Awesome job on your mileage! I am so glad that not only can I stalk your blog, but we can be DM friends too!

Is there a story behind your friend's shirt? I love Carbon Leaf!

Congrats!!! That's an amazing load of miles. Have a great taper. ;-)

My friend introduced me to Carbon Leaf a few years ago! Love the shirt :)

Congrats on your awesome miles!

Holy cow! That's amazing. You are going to rock the marathon. Let the taper begin!

Congrats on the 60 miles! What an achievement! I hope that some day I can get close to that myself.

I think it's official. I need to convert over to Daily Mile. Map My Run sure doesn't give you fun graphs like that (nor does anyone else seem to use the site).

Congrats! The highest I've ever managed was 55 :)