Lululemon Pre-Race Shake-Out Run: On Saturday morning, G and I met up with our buddy Bart Yasso (and 40 or so other runners) for an easy 3 miles hosted by Lululemon. 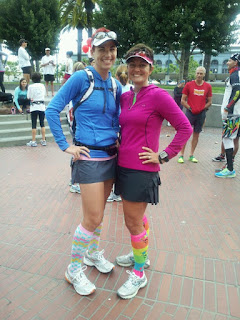 It was a super way to see some of San Francisco by foot and to spend some time with our West Coast blogging buddies, including Aron, Katie A., Rad Runner and Alyssa (They are all wicked cool. Be jealous). 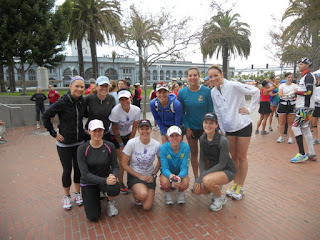 Afterward, we headed to the Ferry Building (basically my favorite place on the planet) for coffee and some delicious vegan donuts. 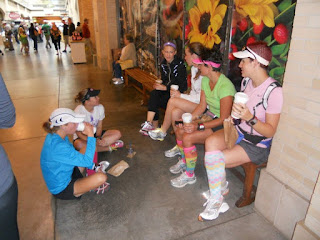 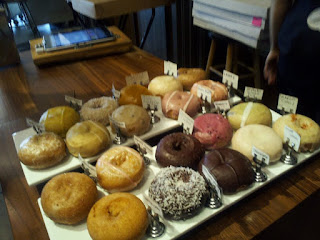 The Location/Views: San Francisco is an awesome city and the race course offers some amazing views. This is a shot from Vista Point, mile 7.5 of the race.

Plus, how many people can say they have run across the Golden Gate Bridge? Not many. And that experience makes running this race an experience not to be missed.

Race Logistics: The San Francisco Half Marathon is hands down the best run race I have ever encountered. From expo to finish line to post-race shuttle, everything went off without a hitch. Plus, the race tees and medals were sweet. I know of quite a few races that could benefit from adopting some of the procedures used by this race. 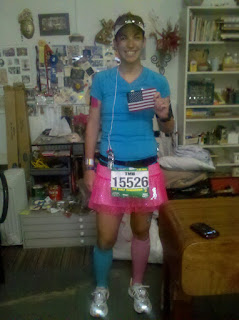 If you don't know how the IRFoF works, each participant runs with a small flag of their choice and then it is sewn onto a larger collective flag. Then after you're done, it gets passed along to another person. I think it's a cool concept to unite runners from across the globe.

Miles 1-10: G and I had been told by more than one person that after mile 10, the course was "fairly flat." We took that to mean that the major climbs were before mile 10 and then after that there would be "rolling" hills. Um, no.

We crushed the first 10 miles. We were on pace to get G her sub-2. We flew over the bridge. Even the monster hill at mile 10 didn't break us. Then the downhill at mile 11 helped us gain back whatever we had lost on the last climb. If it had been "fairly flat," we would have been fine. But we were spent. We executed our race strategy perfectly. Unfortunately, our race strategy didn't match the course ...

Running with Kim: G and I were fortunate enough to meet up with Kim and her hubby, S, before the race. 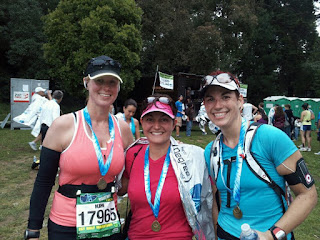 It was awesome to see her again and to log the first few miles of the race together (we ran You Go Girl! last September on Team Will Run for Ice Cream). We had a blast spending time with them and I think we are uber-close to getting them to visit us for an East Coast race ...

The Weather: 54 degrees. Overcast. Light Winds. Can you really beat that?

Our Outfits: G and I wore the Team Sparkle Traveling Skirts for the race. 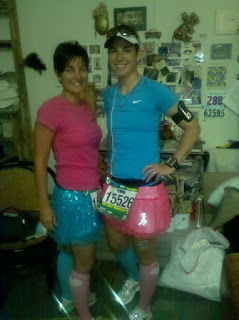 And like usual, we were wicked cute and got about a zillion shout-outs along the course ...

Miles 11.5 - 13.1: After a mile long down hill from 10.5-11.5 (which trashed my quads), we thought it was supposed to be "fairly flat." Instead, we were faced with a mile long climb up to Golden Gate Park. My legs had NOTHING left. It was soul crushing. We should have known though. This was a sign at the expo ... 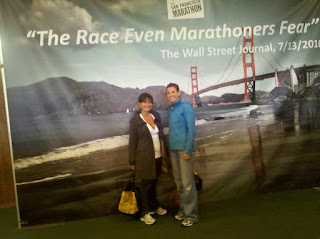 Our Post-Race Attire: G and I planned to spend the day in San Francisco after the race (we stayed in Berkeley). So, we packed our bags with clothes to change into. Except that we kind of didn't bring pants or new bras, which left us walking around in wet clothing. Fortunately, we hadn't gotten rid of our pre-race "throw-aways," giving us something to wear. Unfortunately, we looked like two homeless people walking the streets ...
Posted by TMB @ RACING WITH BABES at 8:17 AM

My sister lives in san fran and was telling me I HAVE to run this race. I wasn't sure I should trust her, though because she's not a runner!

Those donuts look delicious! It sounds/looks like you had an awesome trip!

Sounds like one tough race. Brutal to face a climb like that at the end of a half! Congrats nonetheless - you both did great! And the outfits are possibly your best yet!

Great job! It sounds like fun even if there were tons of hills. For some reason I cannot imagine ANY part of a race in San Fran being "relatively flat."

You both looked fabulous! Sorry the course was such a tough one, but it sounds like you had a great time despite that...nice job!

This course sounds tough! But you guys did awesome and those donuts look good! I didn't really know donuts weren't usually vegan? Maybe there's butter in the dough / frosting? hmmm...

I like the total experience offset not getting that sub 2 and in my book that matters waaaay more than the hands on a stupid clock! (and doughnuts too)

Sounds like a tough race! But you looked super cute!!

Great job on a tough course! And I love that you looked cuter and more fashionable running than you did afterwards LOL.

I agree, the last two miles were soul crushing. But, then again, I was already wasted on that long hill at mile 5!

Meeting up with you two was the best-an east coast race is definitely in our future.

This course is so hard (who told you it was flat!? Not me, I hope!) and you ladies did awesome! Be proud & come back sooooon!!

It sounds like you did an awesome job on a very challenging course! I love the skirts!

i am laughing bout your clothing situation ...

I think you did great for your first post-surgery half. Nicely done!

Great job on a tough race! And those race conditions--beautiful!
:)

Sounds like a great race! How can that place be your fave place on the planet if it had donuts but not cupcakes?

That hill was KILLER. I was looking up and down it from my awesome vantage point ;-) and thinking 'holy f***, they started way down THERE and have to go way up THERE!" I almost started whining in my head when I rode my bike up it to find you at the finish... but I shut myself up.

You did fantastically. It was brutal and you lived to tell the tale :)

Great job, looks like an awesome race to run!

Yep, you were both wicked cute, as always! Way to push through a hard race.

Too funny about forgetting bras and pants!!!

Oh man! You guys were hauling.

At least you looked adorable!

Good run! Not always easy, but this makes us strong. Thanks for carrying your flag! Who will be next?

That's a great time for that race and course! That was my first half marathon a year ago and I know exactly what you mean when you hit mile 11...those last few hills were indeed tough and I didn't think the end would ever come. Congrats on the race and great recap that perfectly describes the course.

A late CONGRATS on a great race and I loooved getting to meet you twice!! Now you just have to come back and do the second half ;)