I remember a time, back when G and I were training for our first Richmond Marathon, where we said to each other, "Wouldn't it be so awesome to just run eight minute miles and have it be no big deal?"

At the time, we were logging a lot of runs somewhere between a 10:00 and 10:30 pace. It felt hard. 8:00 miles seemed light years away. But, we kept running. Even if we'd never be fast, at least we were having a good time.

Fast forward two years to the present, G and I are training for another Richmond Marathon. It will be her 3rd marathon and my 6th (NYC will be my 5th, just six days prior). On Sunday, we met at MTT for a 12 mile run (I'd go on to run 16). It was just a typical group run, except for one thing. It was only 54 degrees outside. A huge departure from the 75 degree starts we had become accustomed to. 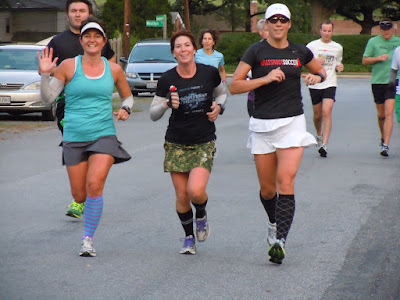 We started with the posse and Birch, who has a tendency to quicken the pace. Right around the end of the first mile, I tried to reign in G by saying, "Um, this 8:38 pace is great and all, but some of us have 16 on the schedule today." I think she missed my comment, but less than a mile later, she had separated from Birch and we fell into a comfortable pace. So, comfortable, that I didn't look at my watch again for seven miles.

By mile 9, when I finally checked our pace, G and I had split from the rest of the posse. Some were running faster, some slower. As my Garmin, clicked over from 8.99 to 9, I looked at it and asked G how she was feeling. She said, "Really good, actually. You?" To which I replied, "Yeah, I feel great. Weird, because I'm pretty sure we can't talk at an eight minute pace."

Somewhere in the last two years, we became those runners who could run an 8:00 pace and have it be no big deal. Yes, by the end, it felt hard. It should. It's running, not napping. I finished that 16 miler with an average pace of 8:35 and buckets full of pride.

Afterwards, I got to thinking. People ask me all the time why I run so much. I usually just say, because I love it, which is true. But, Sunday's run really exemplifies why I run.

I run because it allows me to push my limits and continually improve. It gives me a firm, measurable achievement. It shows me that hard work pays off and that I can be better than I was yesterday.

this is just lovely - but my favorite part? "Yes, by the end, it felt hard. It should. It's running, not napping."

AWESOME. Way to rock it and inspire us all!

I love the "it's running, not napping" part! Nice work on your "easy" 8-minute pace!

That's awesome! I love running with people so you can take your mind off of running and then surprise yourself with distance and time. You guys are speedy!

awesome and couldn't have said it better, same reasons I love running!

You said it right, we run because we love it ... and everything in between. Keep on running!

You said it right, we run because we love it ... and everything in between. Keep on running!

you said it welll! I love your 'isnt not napping' so funny. Bravo on the persistance and improvement!

I think I just fell in love with you. :)

You are awesome in so many ways - what a wonderful way to look back and literally "see" the difference in paces. You're so strong! Impressed and proud of my fellow mommy-of-three-girls! Love it.

Apparently, we are all in synch today! SWEET!

Awesome post! I feel exactly the same way. I remember my first year thinking that 10 minute miles were as fast as I could EVER run. I just ran a marathon averaging under 9!

Great job on your run!!!

This is awesome - and gives me tons of hope there is still lots of room for getting faster. :)

Love it! "Yes, by the end, it felt hard. It should. It's running, not napping." Great post.

Great reasons to run right there, what a fantastic revelation, such a motivation boost!!

Crazy, isn't it?? I feel like I need to pinch myself sometimes. I'll think 'this seems to have happened too easily/quickly' but then I remember all those gut-wrenching runs and realize that it wasn't easy or quick at all. But hard work DOES may off!

Yes yes yes! I struggle sometimes, watching and reading stronger faster runners than I am. Thank you SO MUCH for reminding me today that we all started somewhere, and we all have room to grow, every day. I needed this this morning :)

Love this post T! You are so ready for NYC!!!! Testing limits is the ultimate motivator!

ahhhhh!!! LOVE this post. so inspiring to me. i havent been running long but started about where it sounds like you did. its good to know that i can always improve and can continue to push my limits! excited for you to run NYC!

LOVE this post!! I keep running with the hopes that I can push myself with each run to increase my speeds and endurance. Seeing your success with all your training makes me feel like if I work hard enough, I can do it.

Thanks for the inspiration!

This is great to hear. I really want to get there and I'm a ways off I know, but I have done the same pace wise, down from 12 min miles or something when I started a long time back, so it does make sense. Keep on truckin' err... runnin'.

Awesomely inspiring, thank you!!!! I am training for my first half and feel incredibly slow. I am glad to know that if I work hard enough, I can be as GBA as you and G!!!!!!!

I love this and can 100% relate on every single level. Way to rock your run. You have great perspective. It would not be worth anything if it were easy.

You have just given me SO much hope! When I started walking 5 months ago, 14 minute miles excited me...I progressed to 12, then 11, then averaging 10. I am now comfortable with 9-ish and I want SO SO SO badly to get into some 8's! Thank you for this post. :)

I can't wait to be you! :) seconds were slowly melting away pre-pregnancy. I can't wait to run without this watermelon under my shirt to see where I end up!

You are the coolest. I love why you run :)

And where ARE our trophies?

That retrospective is a very cool point of view for sure! Congrats!

HOOORAH...BABY!!! Love this post and so proud of you!! I hope I am right behind you! Love you!

Absolutely awesome... every word of it. :)

You are doing so awesome (which I know you know!) And it is so rewarding to put the work in and see results like this. GREAT JOB! You are going to ROCK IT in NY! :)

That's exactly why I run and eat the way I do! Well, except it'd be 'dad' and 'husband'.

It's nice to read about going from that 10+ pace on long runs to the 8+ range. I'm hoping that I'll be able to maintain what I have now and hit those 8's soon for those long runs!