The Course: The RTC Sprint had a new venue and race course this year and I went into the race not knowing much about it. The pool swim was amazing. The bike course was flat to rolling. And the two loop run course was flat and fast. It was a racer's (and first timer's) paradise, as long as you were cool with the open water style pool swim.

The Swim: I know a lot of people dread pool swims, but the RTC Sprint brought a new twist to the swim. The course mimicked an open water swim.

This format replicated an open water swim very well (face kicks and all) and I hope to see it at more events.

My Splits: Other than my transitions, I raced really well. Going into the event, I expected that I would finish between 1:20:00 and 1:25:00. But, after I came out of the water ahead of my seed time, I decided to ignore the clock (I didn't race with my Garmin) and push myself. Ultimately, it paid off and I finished in 1:18:12 feeling crazy confident about Rev3 Williamsburg Olympic in June.


Winning: I was totally psyched to find out I had won the Athena division and taken home this sweet bling. 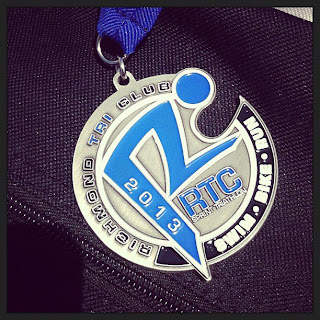 But, I was even more excited to see that I would have finished 7th out of 23 in my age group as well. I'm pretty sure I've never placed that well before.

My new kit: Thanks to an early morning hand delivery, I was lucky enough to be the first member of Team Rev3Tri to rock our 2013 race kits. 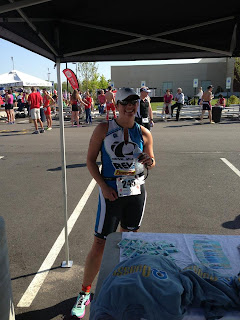 Mounting and Dismounting: It's no secret that I am not a master of cycling. In fact, I really struggle on downhills and turns (they scare me). And I can't seem to get the knack of mounting and dismounting with any sort of speed. Need proof? My average on the bike was 19.2, but when you add in the time that it took for me to run to and from transition and to get on an off my bike, my average was brought down to 18.6. Obviously, I need some work.

Transition: My other major time suck was transition. In T1, I couldn't decide what to wear on the bike so I put everything I had on and then immediately decided to take it all off. Add that to the battle I had with my socks and I could have easily shaved 45 seconds to a minute off my T1 time.

And if we're being honest, I wasted a good 30 seconds in T2 eating and drinking. I didn't want to die on the run, so I figured I had better refuel a little. I know I probably would have been fine without anything, but I didn't want to kick myself later.

Ugly? Yeah, there was nothing ugly about this day ...

Congrats on the Athena Win and a great race!

Congrats on a great start to your tri season!!

WOOHOO! That's awesome Tonia! You rocked that race (and the kit!) What a way to start your season.

I love that they tried to simulate an open water swim in the pool. Fantastic!

Congrats on the win! That medal is sweet.

19.2 is such a good average on the bike. Everything else is good in my world too! Congrats.

Way to win Athena! Totally impressed with you (and your swim times are so fast!)

Congrats!!! That's awesome! So proud of you.. and your kit rocked!!

Nice race! I love the idea of the open water/pool swim. Usually they just have you snake up and down lanes with a time trial start. See you in Williamsburg!