For about a month now, I have be itchy. Like "wake up in the middle of the night to scratch" itchy. It hasn't been pleasant. After about two weeks, I decided to go see an allergist. I knew I hadn't changed any of my body care products or detergents, so I suspected that this itchy rash was caused my something I was ingesting. (Note: even after the testing, we're still not sure that's the case).

Bright and early this morning, I finally had my appointment. The allergist's office said to be prepared for a four to six hour appointment (it only took three), so that's what I did. Snacks and drinks were packed. Books were brought. My cell phone charger was ready.

Upon arrival, I filled out your standard paper work and was quickly brought back to have my vitals checked. Then, I sat down with the doctor to discuss what's been going on, my medical history and a million other things as we tried to pinpoint whether or not skin testing was needed.

With all his questions answered and a quick physical out of the way, it was decided that an environmental or food allergen was likely contributing to my itchiness. And that's where the fun began.

Moments later, my back was being pricked with 61 different allergens. 15 minutes later, it was clear that I had an allergy to almonds, mustard, sesame seeds and lima beans, as well as a slight reaction to peanuts and soybeans.

Following the first round of tests, my nurse walked in with this tray... 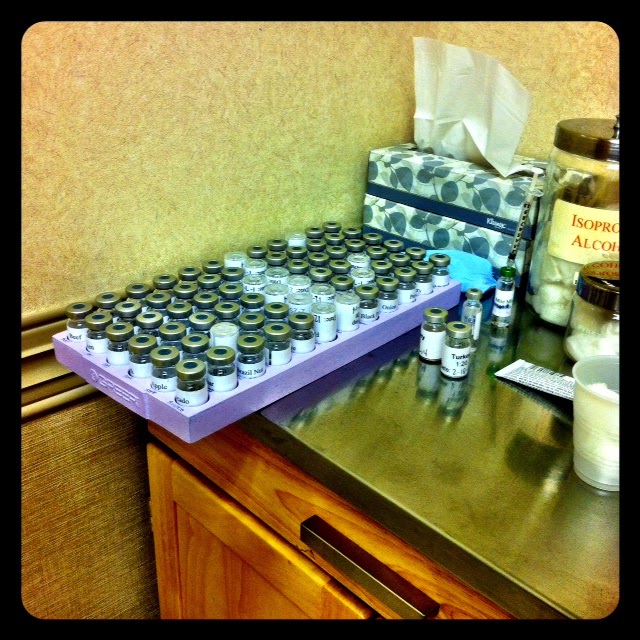 Yeah, that's another 61 vials of allergens. But even better than last time, these ones were to be injected under my skin and then I would be left to bake for another 15 minutes. 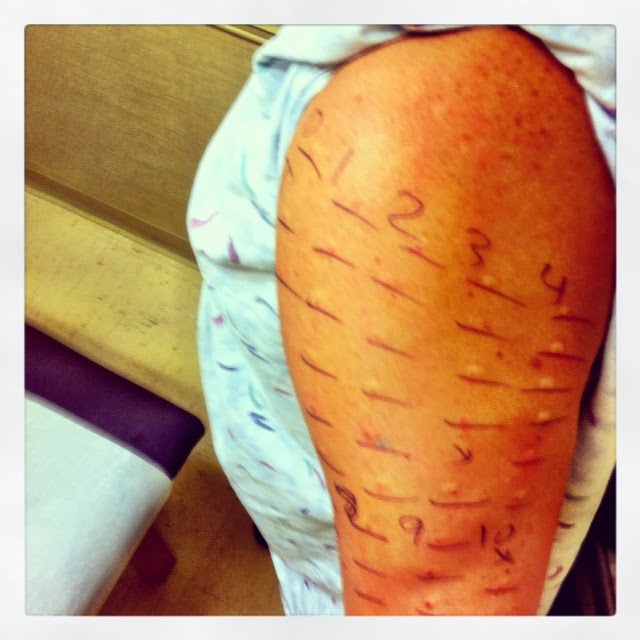 Fun times for all!

Rather quickly this time, I could tell I was having reactions to the injections. It took all my power not to scratch. When time was up, there were 11 new allergies to add to my list. And most of them were things I eat EVERY. SINGLE. DAY.

So, here's where I stand. For the next 10 days, I am on a strict elimination diet of the following foods.
(ranked on severity of my allergy):
So basically, if it's a tree nut or a legume, my body hates it.

After the 10 days, we hope my itchiness and rash are gone. If so, I will simply modify my diet. Avoiding (but not necessarily eliminating completely) these foods. If it doesn't work, who knows? I'll probably end up at yet another type of doctor. For now, I am at least happy to have more information to work with.

Have you ever had allergy testing done? How did you incorporate the results into your life?

omg if i came back positive for hops allergy I don't know what I'd do.

its pretty common for us to develop allergies later in life that once didn't bother us. Who knows, in another 10 years you may react completely different

oh wow, you poor girl that list takes out a lot of things, doesn't it? I had the scratch test when I was younger and was allergic to a ton of random things - spinach, grass, eggs, dogs, chocolate... My Mom used to get me carob so I didn't feel like I was missing out. Carob is not the same. at all. Probably why I am not much of a fan of chocolate to this day. Took shots every week and eventually grew out of it. Hopefully this will be something that you can get past at some point and go back to eating all the things :)

Ouch, that looks super painful! But I'm glad you could narrow it down and hopefully will solve your itchiness in the future.

Did they inject you with the same allergens both times? What the difference between being pricked on the back vs. it being injected on the arm under the skin?

We are having allergy issues with one of my daughters so this is of particular interest to me since as of yet to get any answers as to what's making her react.

That looks so painful!!! All those pricks!! Eek!! Glad you're figuring out what's wrong, but sheesh!!

Ouch! My older son had a welt the size of a quarter from oak when he was tested and smaller welts from peanuts, almonds, and hazelnuts. We avoid those completely.

S had lima bean, green bean, black bean and raspberry allergies as a baby. I had to give those up while nursing. Thankfully, he outgrew them.

We've done lots of food elimination here. After a while you get used to it and don't really miss the food…