I'm going to be honest with you. This is going to be a long post. But since I like you all so much and don't want to torture you with the details, I will get to the point right at the beginning. (Although, if you really loved me, you'd read the whole thing - I'm just saying).
The Short Story - We drove to D.C. We went to the expo. We hung out. We raced. I finished in 1:30:40 (my Garmin read 10.13 miles). We cleaned up. Ate. And went home.
The Much Better And Much Longer Story - On Saturday afternoon, my Run Like A Mother teammates and I loaded up our gear and hit the road in Rachel's mini-van a.k.a "the Mini." Yes, we were a group of hot mamas traveling for a girl's weekend in a navy blue mom mobile. Super stylish!
The laughs started pretty much from mile one. We joked about air farts (yes, air farts), husbands, our kids and roundabouts (obviously, we were rather scattered in our conversation). Once we arrived at the hotel, we attempted to check in and finalize our dinner plans. The hotel told us it would be 10 minutes before we could get into our rooms. After 10 minutes, 45 additional minutes had been added to our wait time. So, we left our luggage at the desk and headed to the expo. I called Kayte to see where she was at (stuck in traffic) and told her to meet us back at the hotel.
The expo was a bomb. Here's the race shirt. Not the best. 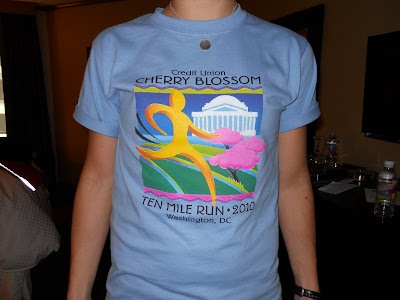 The race website had made a huge deal about only "bag checking" items in their clear race bags, but when Alyssa and I went to get our shirts they were out of bags. So, we asked other volunteers with bags if we could have one. And they were not giving them up. I was seriously ticked. Apparently, those bags were "preloaded" and we couldn't have them. So, where the heck was my preloaded bag?
Once we got back to the hotel, I found Katye waiting in the lobby and I ran up and gave her a big hug. I was psyched to spend the weekend with her, since we only got to hang out for like 15 minutes before Disney. Once we got settled, we headed out for dinner. Which was a huge fiasco. At one point or another we had six reservations, but as we walked out the door, we had none. We walked around and finally found a place to eat. It was kind of a creepy restaurant. An all male staff. And we were the ONLY people in there. But the food was good and other people eventually filled the restaurant. We filled our bellies and took this adorable group shot. 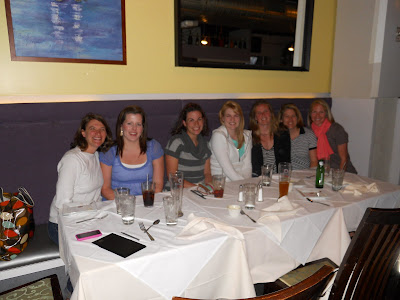 After dinner, it was back to the hotel to relax and head to bed. We watched Anchorman. The girls made fun of my hoodie (which I wear so that my face doesn't hit the hotel pillow - a little quirk of mine). And we just kind of chilled.
At 6 a.m. the alarm went off. We slowly got moving and dressed for the race. Here's the entire group right before we headed to the corrals. I know, we're cute. 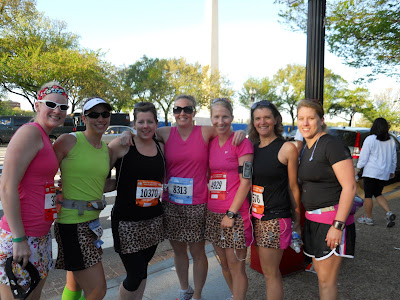 Katye and I lost the rest of the girls at that point. They tried to hit up the port-o-potties and we headed to the start, which looked like this. 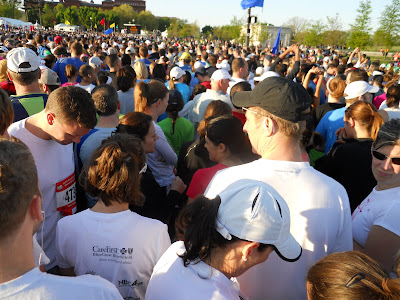 Somehow, we got in to the corral and waited to start. This is us waiting. 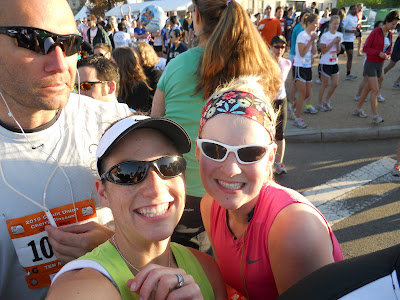 Very slowly, we got moving. Katye and I stuck together for the first few miles, but being the competitive person I am, I was running my own race and we got separated. The course was crazy congested and I never felt like I could just run. I kept running into the back of people and had to try to squeeze through or slow down and move over. My pace was all over the place. It was crazy. I felt really good until the last two miles. Until that point I had been averaging about an 8:47 pace. But then I bonked. My last two miles were 10:00 and 9:57. Boo! I know the whole thing was mental. I kept telling myself, "This is all in your head. Suck it up." But I just couldn't. When I finished my Garmin read, 10.13 miles in 1:30:36. My chip time was 1:30:40. BUT - according to my garmin, I hit 10 miles under 1:30. Here's the screen capture. 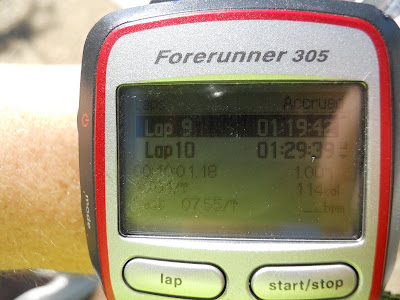 Sweet! And do you know what half marathon time that calculates out to? 1:59:03. Yeah. Sub-2 hour half, here I come ...
Despite the last two miles, I was super psyched with my time and the majority of my race. Plus, I got to meet up briefly with MissZippy post race. She killed this 10 miler with a time of 1:13. A new PR for her! Here's the picture we snapped. 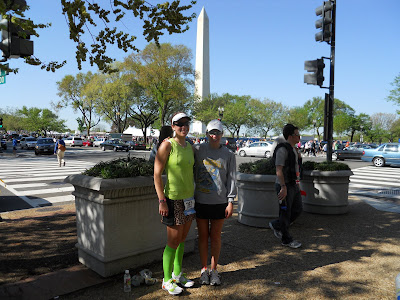 After the race, we headed back to the hotel (which was a big complicated mess). Katye had to leave (but I get to race with her again on May 8th!) and the rest of us went to brunch before driving back. I can't even start to tell you how much fun this weekend was. So, who's in for the next race?
Posted by TMB @ RACING WITH BABES at 8:02 AM

I loved seeing all the photos of the blogging girls! Nice job with your time....and your hoodie protector sounds like a good idea!

what a great weekend and race. love those leopard running skirts :)
your time was awesome just as expected too!

Congrats on a great finish and an awesome weekend. Sounds like a great time!!! What's next on your agenda?

Awesome, sounds like you had a great time! The weather sure was great. I almost wish I'd signed up to run!!

Congrats on the great time.
Sounds like you girls had a great time, how much fun to run with your friends.
Loved your running outfits! Great Skirts!!

The outfits are great!! Too bad about some of the "glitches" but it sounds like you all had a wonderful time anyway!

Congrats on an awesome race. You definitely have a sub-2 HM in those legs!

Congrats on a great race. I love the photos of you ladies in your leopard skirts. And I didn't know that you can make the 305 display splits like that...will have to dig out the manual.

I want to run with you guys one day!! It looks like SOO much fun. Great job on your time. I bet you'll surprise yourself with the half. I think you'll be WAY under 2 hours.

I totally enjoyed the long version :) ...congrats on a great race!!!

The race pic with the matching skirts is SO cute! Hot ladies :)

You totally have a sub 2 hour half in you - I just know it! Good job girly, I wanna race with you! :)

Fantastic run! Loved the re-cap. You gals sure look like a ton of fun. I'm happy to read you enjoyed yourselves. I was so inpsired watching the 10 milers take off on the start. Amazing!

I like the hoodie idea. I always take my pillow (in 2 cases!) because hotel pillows are gross!

Love all the photos and the recap. Sounded like a great weekend.

You are a great great race!

What fun! Great job on the race!

Lovin' all the skirts :)

You did a great job! It sounds like so much fun with everyone! Do you carry your camera? Is that how you got the cute corral photo?
Love the sweatshirt with hotel pillow idea.

Love all the pics and ya'll are too cute in your skirts!!! Great job out there!

What a fun weekend! So had the trees already bloomed before the race?

I was wondering if you'd all stick together on the race - I guess it would be pretty hard if everyone is trying to set their own PR huh? I never like feeling that I am slowing someone down!

Glad you are back safely! Everything well at the homefront while you were gone?

Oh I am pretty sure I will do the Indy 1/2 in October - we should gather some more running moms there!

any chance you ever run in Nebraska? :D can I ask where you found your water bottle holder in your header? I'm a fan

That sounds like you all had such a fun time, even with all the craziness! And, you did awesome on the race! It's so frustrating when races are packed and you can't find your groove b/c of all the swerving around people you have to do...ugh!

Oh, and I loved how you all kindof matched...the group pic was great!

Great race recap. I love that you all went together and did a girls' weekend. I bet that was a lot of fun!

Awesome time!!! Too bad about those last couple miles...sometimes the "winds" of running can change so quickly. Especially when you've been fighting the crowds the entire race! That would drive me crazy. I guess I should get ready for it, I'm running San Diego, my first super-sized marathon...not sure I'm ready to bob and weave that much.

So glad you had such a great weekend!

Great run, you're on your way to the half mary goal that you have...you can totally do it! I can't believe how crowded your race was, you guys were packed in there.
Oh, and I love your green socks!

Sometimes it's not about the race; it's what happened before and after the race that really matter. You have a lot of great memories - and those carry you to the next event.

Hoodie in hotels - love it!

YOu are soooo ready for a sub 2 hour. AWESOMENESS!!

What a FUN weekend with friends. Those are the best. GREAT RACE TIME too. So exciting. Glad it was so much fun.

What a great race! Congrats on such a good time! I'm glad you got to enjoy it with friends too...makes everything better!

Great job on your time! I kept looking for girls in running skirts to see if you guys were looping past me at any points, but it was still so congested.

Oh, and the preloaded plastic bags--nothing but race information in them. You did not really miss anything at all.

that's awesome! fantastic timing too! you all look so cute in those skirts. i miss DC; i bet it was pretty!

do you live near DC? I'm looking for a running buddy for my long run in a few weeks!

I always try to tell myself that I learn something from every race good or bad and hopefully I don't keep making the same mistakes!

What a fun weekend! I wish I could do something like that. The hoodie is a great idea. I don't get what was going on with the plastic bags!