It happened again. I blinked and suddenly another month has passed. Three months into the year and I am well on my way to FINALLY hitting 1000 miles. This is Dilly and I after yesterday run (miles 301.5-305.85). I'm rocking my new RunningSkirts headband and Dilly wasn't quite ready for the camera. 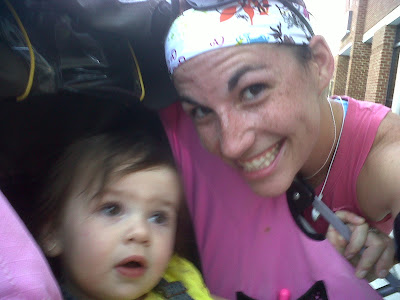 When you extrapolate it out, I am actually on target to hit 1200, which would be almost 300 miles further than I have ever run in one year. That would be SWEET. Speaking of mileage, I realized this morning that during the 305 miles I have run in 2010, I have burned over 35000 calories. That's over 10 pounds. Wow! I should be 10 lbs lighter than on January 1. But I am not. Instead, I weigh exactly the same. So that also means I ate 35000 calories that I probably didn't need ...

Current Book: OK. I know you are going to be shocked but, I actually read a book this month. I know. Pick your jaw up off the floor. It was Run Like A Mother. And whether you are a mother or not, you need to read this book. And so does your significant other.

Current Shame-Inducing Guilty Pleasure: Did you see my mention of the HUGE and absolutely delicious cupcakes? How about the part where I said I ate FOUR last week alone? Enough said.

Current Obsessions: Running skirts. I got two new ones this week. Someone needs to block that website on my computer.

Current Drink: Diet Dr. Pepper. There is a TON left over from J's surprise party.

Current Need: Some self-restraint. It's been a rough few weeks.

Current Bane of My Existence: My lack of self-restraint.

Current Indulgence: What haven't I indulged on this month? Seriously, are you not getting the lack of self-restraint thing?

Current Blessing: That after 16 years, I finally have even legs. No more limping for me.
Posted by TMB @ RACING WITH BABES at 6:33 AM

That was fun! March was quite a month for you :) I love that you set 3 PRs!

Fun post. I have never done a 10 miler. Good luck with it. I wish I had 4 delicious cupcakes to eat!

Congrats on your great mileage! Good luck on the 10 miler...and Thanks for sharing :)

Sounds like a great month and that you are well on your way to a great year! Love the lack of restraint--I share that.

whoa, whoa, whoa, runningskirts have headbands too? this could damage my savings for this month....love the flowered skirt and now that i know it has a matching headband, i could be in serious danger.

ummmm let's talk about this running skirt problem you have...I think maybe instead of adding to your collection you should start adding to mine! Ok I will take any of the colors....let me know if you need my address!

i think all the donuts and cupcakes are well deserved! you are rocking the mileage girl-i am jeolous!

Three PR's! And you are completely adorable. Love the picture!

Great month! You're well on your way to those mileage goals.

What a great month!!! You are going to hit some crazy miles this year! And you're speeding up - I think it's those even legs :)
Oh man, and when you put that you should have lost 10 pounds with all your mileage, man, I should have lost like 30!!!! But nope, still the same...hmmm, crazy!
Happy Thursday!!

Congrats on an awesome March and I bet you have an even better April!

Nice month! Amen on the "shoulda lost 10 lbs" thing...what's the deal with that?!

What a great month!!
Heres to a fantastic April!

Sounds like you've been busy :-)! Awesome job on the mileage!

Wow! You have been quite the speedy mcspeedy! Keep up the great work!

I just logged all my annual miles into DailyMile yesterday and saw that I should be down 7 lbs since Jan 1st. But ... like you, I'm not. GRRRR!

Great month for March! Keep up the awesome work.

Umm...can I just say that The Script are an awesome band! You have to DL 'Rusty Halo'...one of my fave running songs!! I've seen them live twice and met the whole band once backstage (with my husband lol). Fun!!!

I love this post! It totally made me laugh...especially about the cupcakes and donuts "earned"..ha ha!

The pic of you and your daughter is too cute!

Oh, and I just got my copy of Run Like a Mother and so far I really like it! :)

OK, which skirts did you buy? The flowered one? I love that headband, I just saw it yesterday when I was in the shop! I LOVE the pink polkadot skirt too...
fun post!

Donuts earned is a great stat, after a long run I always tell myself I can eat whatever.

You rock!!! I'm going to look into the book you suggested!

Excellent numbers and stats for March, you are doing so well! Look for me under "J" and a few places in the book :). Have a great Easter!

It is fun to look back on a month and see what was accomplished isn't it?

Have a great weekend!

So, you couldn't make your mind up over one RunningSkirt? Buy two; save on shipping. I have lots too, and strappy tops - also great.

Cute picture. Loved reading your month in review and ROCK on for getting over 1,000 miles in for 2010...You can TOTALLY do it.

Just an FYI...I love reading your blog. So fun!