If you've ever read this blog before, you are completely aware of the fact that I am a skirt-a-holic. I almost never run in anything else. In fact, I could probably count the number of times I have run in shorts on one hand.


With that being said, when the lovely people at Outside PR sent me a pair of Sugoi Verve Shorts to try out, I was skeptical. Afraid even. The thought of running with thigh bunching made me want to cry. So, I eased myself into testing them.


On day one, I just wore them around the house. And I was impressed. They were super comfortable and cute. Two qualities I look for in workout gear. Since they performed well during the initial wear, I decided to test them while cross training (running in them was still too scary). I had P90X Plyometrics on the schedule. A good test for the shorts due to the amount of jumping and moving I would be doing. And again, the shorts exceeded my expectations. They did not ride up at all and allowed me to move easily in every direction. After that workout, I was convinced that these shorts were awesome (I even went out an bought another pair.) But I was still hesitant to run in them. What if they bunched? What if I had a constant wedgie? What if I loved them more than my skirts?


Finally, after much internal debate I sucked it up and got dressed to run. And when G saw me sans skirt, she nearly had a heart attack in my driveway. Once she regained her composure, she snapped this shot of me. 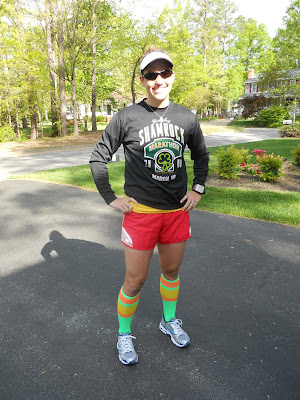 See, the shorts are super cute.


We had eight miles on the schedule. I figured it was far enough to get a feel for the shorts but short enough that if I couldn't stand them I could make it home relatively quickly.


So, how did it go? Well, can I just say that a quarter mile into the run, I forgot I was wearing shorts all together? Initially, I was overly aware of the difference from my usual running gear, but once we settled into our run, the shorts were great. They didn't ride up or bunch at all. I was seriously impressed. Shocker, right? Now, I won't be abandoning my skirts by any means, but I will definitely be wearing these shorts to cross train and who knows, they might even get pulled out for a run here and there.

If you are in the market for a great pair of running shorts, definitely check these out. You can learn more about them HERE.

* I was not paid for this review, although I was sent the product for free. The opinions stated here are completely my own.
Posted by TMB @ RACING WITH BABES at 2:26 AM

They are cute, but it just doesn't look like you at all...

They look great but you really do look difference with shorts ;) Thanks for the review!

I agree with everyone. You don't look like you but don't worry......you still look cute!

I had to do a double take when I saw the word "shorts" on your blog.....happy they worked for ya!

Shopping for running clothes is almost my favorite part of running. :o)

Do they have built in underpants? I find this is a must in most of my shorts to prevent any bunching or uncomfortableness....

What is wrong with the world? You.have.on.shorts! Give me a minute to adjust.....ok, I'm back.

Cute shorts but I'm so used to you in skirts it's hard to get over. I just bought 2 Nike Dryfit (gift certificate!). I tested one pair in the 5k this morning but had on capris under so not a great test but they didn't cling to the capris (which I will be wearing till the chill or morning/evening is over) so that's a plus.

yes, very cute and the socks complete the outfit. :)

that's awesome they are super cute!

As per usual, you look super cute, but I so couldn't wear those. My legs are way too big.

At first, I thought you wrote "sans shirt" and gasped. Then, I gasped again when I read "skirt".
Cute shorts. Will you wear them again to run?

Great review! It's definitely odd seeing you in something other than a running skirt! And they still look great with your socks. ;)