As you may recall, on April 30th, Dizzle is running her first 5K. After her rock star performance, two weeks ago at the VA 529 Kid's Mile, I asked her if she wanted to run a longer race. At first, she was hesitant. But, when I told her we would run/walk the race, she quickly jumped on-board.

Now, I realize that a 5K is a lot longer than a mile. And I know that two weeks isn't ample time to train. But, it gets hot here in Virginia and I decided that a chance at a cooler race with less training was a better option than a guaranteed hot race with decent training (I would feel differently if she was an adult, but she's 5).

Plus, Dizzle has two things working for her ...
Because of that, I KNOW she can cover the distance. The challenge is convincing her that she's strong enough to run a lot of it. (Dizzle's a bit of a whiner.)

Yesterday, I decided to get an idea of her endurance. So, at the hottest time of day (because I am nice like that), I put Doodle and Dilly in my double stroller and told Dizzle to get her shoes on. She did, and we started running. 4 minutes running, 1 minute walking. I told Dizzle nothing except that she had four minutes until we could walk. No mention of total time or distance.

And it went really well. Sure, she whined at moments (I swear our elderly neighbors thought what I was doing was a form of child abuse. I call it tough love). And she constantly asked how much longer she had to run. But she did it. We covered the two mile route in 25:44.

Afterward, she was tired (obviously), but she recovered quickly and due to the fact that she was singing/talking to me the entire run, I know she will be fine over that final mile. Once we got back inside, I asked Dizzle to show me what two miles looks like. Here's what she gave me ... 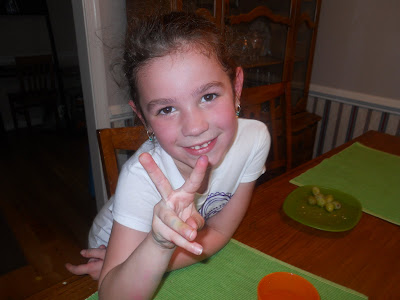 Yeah, I'm pretty sure that's pride on her face.
Posted by TMB @ RACING WITH BABES at 8:09 AM

Adorable. I can't wait to see the recap of her race!

Awesome! I'm sure she'll be great in the race!

she is going to be so proud of herself when she finishes her first 5k!

So cool... I think I am jealous that she has you to train her.

awwww! she is awesome!! way to go dizzle!!

Ok, our children and their running are lining up so hilariously! My oldest and I are running our first 5k together (Yes. I have never run a 5k) on May 7!

So proud of your sweet oldest daughter! Way to go! Excited to hear how she likes her 5k. And please, pass along tips for K1 a week later!

So cute! You've got a rock-star runner in the making for sure!

She's got it in the bag!

Your girl is awesome! My little girl is too! She kicked butt in a 2 mile race at nearly 8 yo (17 minutes, 52 seconds). She's destined to be a better runner than me, and run through Boston someday.

So proud of you! What a great mom. Congrats to Dizzle on a great 2 miler!

Love your blog! And Dizzle can pretty much run 100x's faster then me! WTG!

That is so awesome! Yay for Dizzle! I cannot wait till my boys are old enough to run races with us! :)

How fun! I can't wait to get my girl to go running with me.

She takes after her Mom obvs!!

love it. so stinkin cute. can’t wait to hear about her big race!

your kid is great!! She's seriously one tough cookie! She rocked 2 miles!! She ought to have pride on her face! :)

That's awesome! My almost-5 year old raced a 1k and has been begging to do another race. Maybe I should do a 1 mile with her and just plan to run/walk. Can't wait to hear how your little girl does in a 5k!