This weekend was the Ukrops Monument 10K and VA 529 Kids Run. And although I opted out of the 10K, I did hit up the expo to pick up Dizzle's packet and to chill with G's BFF Bart Yasso and Mark Remy (author of The Runner's Rule Book and Executive Editor of RunnersWorld.com) 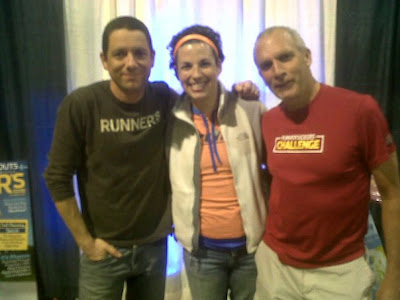 You know, it was your standard 10K expo. Except for the celebrities. And the fact that it was the best expo I've ever attended. 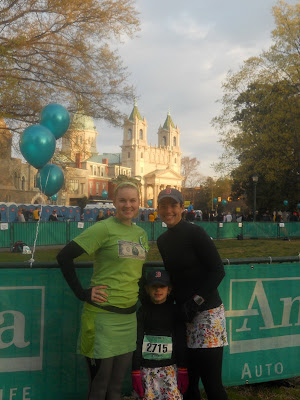 But, this is not my recap, it's Dizzle's. Like I mentioned on Thursday, Dizzle had two goals for this race.

The thing was, Dizzle didn't exactly train for this race. She's probably run a total of three miles since January. Maybe not the best training plan when you have such lofty goals. But, I was confident she could accomplish both.

However, the race was not officially timed, so it was hard to concretely say whether or not she won. She did inform me that she had, in fact, beat all of the other five-year-olds. And I trust her. Really, she has no reason to lie.

The thing we could determine was if she ran a sub-12 mile. I wore my Garmin and ran the entire race with her. During the first tenth of the mile, she was tripped and fell hard. But, she got back up and kept going. With less than a quarter-mile to go, she told me she needed to catch her breath. I told her she was fine and to keep running. She did. And when we crossed the finish line, my Garmin read 10:46. A 1:22 PR for Dizzle. And she was pumped. 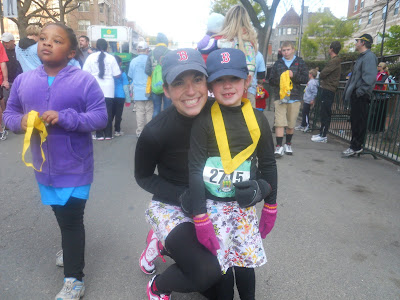 But, don't take my word for it. I interviewed her post-race so that she could tell you herself ...

Me: Did you have fun?
Dizzle: I did have fun.

Me: What was the worst part?
Dizzle: The worst part was when I had to go home because I wanted to go on the pirate bouncy and I wanted to get more food. (Obviously, the post-race festivities were a big hit.) 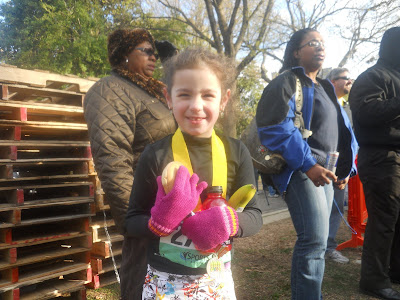 Me: Would you run another race?
Dizzle: Yes, because I like to run and win medals.

Me: When will you do your next race?
Dizzle: I don't know, maybe like in May.

Me: What is your running goal right now?
Dizzle: My goal is to not stop running ever.

Me: Do you want to run a marathon?
Dizzle: Maybe. I think I would like to do that next October.

Me: Do you know how long a marathon is?
Dizzle: No.

Me: Take a guess.
Dizzle: Long.

i think october is pretty reasonable...

Congrats to Dizzle! So cute!

I'm with Katye on this one: with the right training plan (and her mom is a coach!) she could very well try her luck at a marathon this October. What are the BQ times for girls age 5?

Congrats Dizzle! You did an amazing job! :)

Congrats to DIzzle-- I think you have the workings of an amazing runner on your hands! :) P.S. Your daughter runs a faster mile than me.

Congrats! That is such a cute race recap :)

I agree with Rachel...it looks like you have the makings of a very talented runner! Just like mommy! Congrats to Dizzle!!!! I love how she is planning her marathon!!!

Great pictures!!! And CONGRATS to Dizzle! Great job! :) She is definitely your daughter. :)

Congrats to Dizzle on a great run! And your matching outfits are adorable! And your interview session is so cute.

Awesome post race interview! And, I'm really jealous that you got to hang out with Mark Remy.

This is priceless! I love the interview and when she says maybe she'll run a marathon in October. She is definitely your daughter :)

hahahah. best post-race interview ever! you've got a little running, bling-obsessed girl on your hands!

My goal is to not stop running ever. TOO CUTE! Congrats Dizzle :)

Congrats to Dizzle! Watch out - that girl's gonna be leaving you in the dust soon. ;o)

Way to go, Dizzle! That's such a great PR! And I love her goals for the year! Marathon-bound for sure! :)

Love love love this. She is SPEEDY!! Our oldest would have to train and FOCUS to go that fast.. Nice work Mom..

Congrats Dizzle! She is too stinkin' cute!!!

ahahaha, the interview is adorable! And big congrats to Dizzle on her PR!! And beating all the other 5 year olds. :) Too darn cute!!!

Awesome... every single bit of it! Way to go Dizzle!

Congrats! Dizzle is a rock star

Her answer "next October" really did make me laugh out loud. She's such a hoot.

I LOVE THIS!!! congrats to dizzle on a great race - esp after falling in the beginning. and congrats to you for being such an awesome mommy!!!

I bet she could do it in October, don't you know who her mother is?!

I thought she'd say the worst part was being tripped but I can see how not going on the pirate bouncy and not getting enough food would be worse.

Well I think if 3 miles of training gets a 1:22 PR in the mile, I think an successful October marathon looks very promising! (...now which year that October falls in is up for debate by semi-reasonable parents. heehee)

I love her race reports best! :)

Congrats on a huge PR - and beating all the other 5 year olds!

Laughed out loud HARD at the running a marathon in October comment! So so cute. Love the pics and how impressive she is!!!

oh my gosh she is so cute!! you have obviously set a very good example with the running :)

this is so sweet, how fun!

Blind goal setting. Sometimes that's the best way to do it!

sooo cute! I love it!

LOL @ the interview! So cute. She's like her mama!

This is so powerful. why? because it shows us, through this little girl's eyes, the genuine, unfettered, truly inspiring feeling of sport -
Thank you. More pleaz!

And, for the record, I'm a new fan of your blog. Good fun, and in a meaningful thoughtful way.