When training for my first two marathons, I followed plans that peaked at 36 miles per week. They were fine plans. I'm sure that lots of people did well with them, but for me they were a total fail. In both instances, I ended up seriously injured and barely made it to the start line. At that point, I swore off marathons FOREVER (obviously, that didn't stick).

For me, marathon number three wasn't on the schedule. I was registered for the Indianapolis Half Marathon and I was tagging along with G on her training for the Richmond Marathon. I had zero intention of doing anything but building my base. But then, FOMO (fear of missing out) set in. I was consistently running more miles than I ever had before. And I was injury-free. I figured I might as well switch my registration from the half to the full at Indianapolis. So, that's what I did.

In the eight months since making that decision (two complete marathon training cycles), I have built my base from 25 miles to a peak of 60 miles a week. Since January 1st, I have run 622 miles (44.4/wk). I have cut my marathon time by 51 minutes. And I have done ZERO speed work. Honestly, it's not that I planned on skipping all the speed work. I was just more focused on building my endurance. And the key to endurance is a large base.

It's clear that things were working. The plan that I was following played to my strengths. But then I came across this article in the January issue of Runner's World. It described the Hanson Brothers marathon training plan which peaks with a 16 mile long run. Yes, 16 miles. But, their plan also included something I have failed to execute in the past - SPEED WORK. Lots of it. So many aspects of this plan seemed crazy in relation to what I had been doing, but at the same time I was completely intrigued. (Note: the weekly mileage is very similar to the plans I have designed for my last two marathons.)

I decided right then that I would use this strategy for my next marathon (NYC). I mean, what's the worst that could happen? I've had horrible marathons and I've survived. And since my goal for NYC is to HAVE FUN, I really had nothing to lose.

So, I got started on drafting my plan. I based it roughly on the plan in the article, but extended it and swapped some things out. And this is what I came up with ... 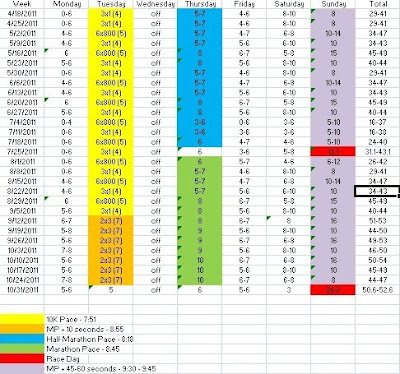 I'm really excited about it.

I love it when people experiment on themselves (in a smart way). I can't wait to see how this works for you. It does sound quite intriguing.

And your paces have become seriously impressive. Go you!

Now THAT's a marathon training plan I could buy into! Can't wait to see how it goes!

I can't wait to hear more about it! Is it possible to get to and stay in half marathon shape year 'round? If so, how should I do it?

I was intrigued by that article too. You came up with a great plan! Can't wait to hear how you feel about it. I'd love to make the jump to more speedwork - just can't seem to find the time for longer runs.

Looks like an interesting plan. i'm curious to see how it works for you!

wow very interesting. I'm doing a marathon the same weekend you are. I can't decide if I want to do more miles when my training starts (or when I want to start it either). I'm doing speedwork and tempo now, but I think I need more miles. However, I burn out running more than 5 days a week. 4 is what I am running now. Thanks for posting. : ) Good luck!

Good luck! It's hard to find a training plan that has everything you want and still fits your schedule, etc (at least for me anyway).

Hmmmm very interesting! I could sign on for this plan....it wouldn't drive the hubs crazy! I can't wait to see how it works for you!

I can't wait to see how this goes for you! I'm still trying to figure out what to do for my fall marathon. I think I probably need to focus on endurance this time, but maybe I will try a plan like this in the future.

I read this same article. I will be interested to see how it works. Your plan looks great. I wonder if you could adapt it to a half training program.

Unorthodox becomes you T :) ...you are so disciplined, that any plan is bound to work with you. Really looking forward to seeing how this goes!

I remember reading that article and being intrigued. Can't wait to see how it works out for you!

I'm running my first marathon in almost two years in October and am currently looking for a training plan. Any suggestions?

I saw that article and was totally for it due to the 16 mile long run instead of 20 ha! when I ran disney I (accidentally) only ran an 18 miler, once. It was def a hard race but I DID finish, so I see how it oculd be doable...

Good luck with this. It will be interesting to follow you on your journey.

Just knowing that I'd have to jump from 16 to 26.2 miles would be enough to scare me away from this plan. But that's just little ol' slow-poke me! You're on a whole 'nuther level!

Awesome! I'm inspired for sure.

Looks like a good plan. So jealous you are doing NY!!

I may have to try this for my second marathon (the MCM).

Excited to see how this works for you! I just deleted speedwork from my marathon plan. Thinking I need to just work on mileage for my first 'thon... so that there can be a second!

I read that article and was definitely interested too. I think that the "right" number of miles depends largely on how much you can run without being injured or getting run down. And I have seen first hand that speed work WORKS. I have only been at it a couple of months and have seen a huge difference. I have no doubt you are going to be smoking fast! :)

YAY! Thanks for letting us in on the plan. Interesting stuff! Sounds like a good time to experiment (for a "fun" marathon). Can't wait to see how it all plays out!

ALso, I love a good spreadsheet for running!!! My love of organization runs deep lol

I think you'll be pleased with the speed work. I'm a firm believer in it's benefits!

I think mixing it up will work well for you! Hard to believe that you can be any more awesome! I struggle with "slow" run pace too. Especially on the treadmil, it seems much harder than just going for it.

I have never followed a plan of any kind though.

Wow! My husband started this plan in January...complete fail because he is lazy. He is going to drop to the half with me on May 1.

You are such a great planner. I could never have a plan printed out for such a long period of time (wish my life allowed for that).

You are certain to hit your goals with a solid plan since your follow through is spot on!

Good luck!! I'm liking the format of your schedule. I love spreadsheets. :)

Can't wait to see how this turns out, because I am like you... I go for endurance and do very little speedwork, and any speed I've gained has been based on just having more endurance. Gonna have to go look up this article too!

Wow longest run is 16 miles.. hmm maybe if I used this I could have avoided stress fractures.

I love how many ways people swear by to train for various races. Whether it be endurance heavy, speed work heavy, running six days a week or three, cross-training heavy or completely lacking it, everyone has their own way of training.

Good luck! I think this plan looks awesome too. I'm going to go look it up too!