Race Concept - If nothing else, the concept of this race was fantastic. Eating Munchkins while running a 5K is pretty much my idea of heaven. And the vast amount of food I consumed, once again proved that old habits die hard. Without some serious self control, I could easily revert back into my former self.

The Outfits - Seriously, how fantastic do J and I look? And I didn't even have to ask him to coordinate. 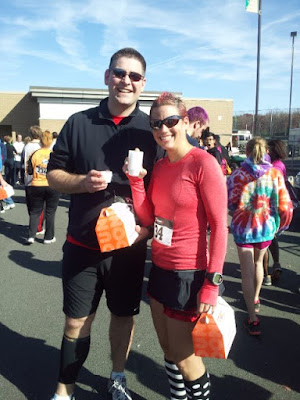 Munchkins - Did I mention there were munchkins? Yeah, like tables full of munchkins every mile or so.

Pace - I ran the first 2/3 of this race with J. Just after the mile 2 mark, he asked if I just wanted to finish the race. I did. So, after averaging an 11 minute pace in those first two miles, I ran an 8:50 last mile, which included two Munchkin stops and two photo stops (when I saw J). 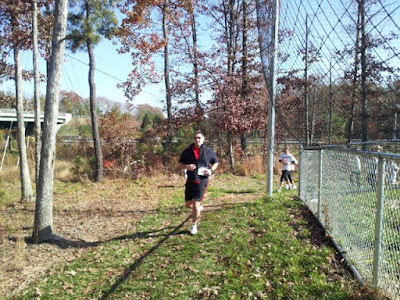 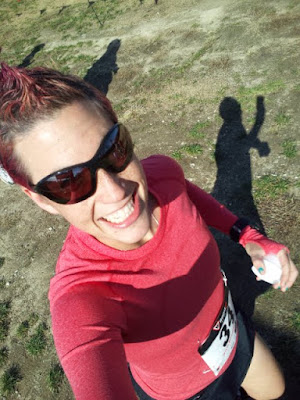 My moving average was 7:30 and somewhere in there I was running a 5:26. It's like all that sugar gave me turbo boosters.

Swag - Not only did you get all-you-can-eat Munchkins on the course, hot chocolate and coffee before the start and a race tee, every runner left with a coupon for a free box of 25 Munchkins and a refillable coffee mug. Insane, considering that the race only cost $15.

Extreme Eating Challenge Title - As you know, this race was never about speed for me. It was about donut eating. With no intention of letting J (or anyone on the course, for that matter) beat me, I consumed 22 Munchkins over the 3.1 miles. That's equivalent to 7.33 regular donuts. And I could have eaten more. It didn't bother my stomach one bit. 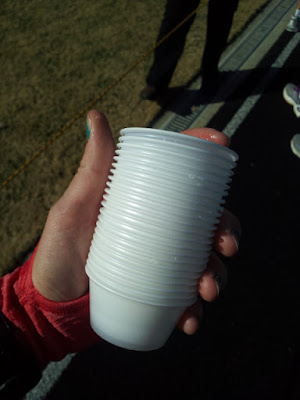 (empty munchkin cups. had to be carried to the finish for credit.)
The Bad:

The Course - Since the route had to stay on school property at all times, the course looped like crazy over rather uneven off-road terrain. It was sloped. And muddy. And not what I am used to. I was constantly concerned that I might roll an ankle.

Munchkin Fail - So, before the race we were told that each Munchkin would be in a cup. Once you ate the Munchkin, you had to carry the cup to the finish. Each Munchkin consumed would be a 10 second deduction from your time. Fabulous. I figured I had two things to do.

1. Eat more than J.
2. Eat enough to get some serious time taken off.

And I totally did both. But, since I wasn't paying attention well enough to the announcements at the start (which were impossible to hear), runners only got deductions for the FIRST THREE (3) MUNCHKINS. WTF? So the 3 minutes and 40 seconds worth of Munckins (also known as 1,400 calories) were for nothing.

Organization Fails - I know this was a first year event. And I know it was thought up by a high schooler. But, there were some serious fails for this race coined as an "Extreme Eat-Run Challenge"

1. The 3 Munchkin Cap - On what planet is eating 3 Munchkins EXTREME?
2. No Separate Divisions - There should have been two divisions for this race: Donut-Eaters and Non-Donut-Eaters. There also should have either been a set amount to eat at each donut stop or the ability to get a time deduction for each Munckin consumed.
3. Order of Donut/Water Stops - At each stop the water came BEFORE the donuts. Totally needed to be the other way around.

With that said, I'd totally run this race again.
Posted by TMB @ RACING WITH BABES at 7:34 AM

Wow this sounds like a great idea! I totally want to steal this idea and do something like it in Houston. (JJ) www.dashingdiva.net

I have been dying to read your recap! I was there, so I should have my own "recap", but we had to leave as soon as the race was over thanks to some super crabby kids...who thought I would be crossing the finish line with donuts for them. Sigh.

So, I agree that the focus should have been WAY more on the donut eating, not the race. The 3 donut cap was dumb. I guess they figured people might eat enough donuts to make their time 0? hahaha. you almost did, right??

Another thing, did they even track people's actual times? I know the woman told me as I crossed what the time was, but I didn't notice that anyone paid attention outside of that. I ate only 2 donuts...because those 2 really made me think I was going to vomit, so you eating 22 just BLOWS. ME. AWAY.

I'm going to reconfigure my eating/training for next year...and get the balls up to actually say hi to you. haha! :) At the start I was even running right beside you for a second, but lost my nerve. Does that crack you up? Like, you are mini-celeb status to me?

One last thought - did you email the race director or anything about your suggestions? I was thinking about it...

Um... 3 munchkins. Who eats just three munchkins? I could see a 3 dozen limit.

You go girl for eating 22 and still running a 31 minute 5k. I'm impressed. And you win in my book!

I love it! I agree though...what's extreme about 3 munchkins??? That doesn't even equal one whole donut!!

You should email the organizers with your feedback.

I agree. Three munchkins? I have an uneasy run-stomach, and even I could eat three munchkins. Nothing extreme about it.

I'm thinking I should just self organize a race like this for myself. I'll just strategically place munchkins around town to motivate myself into running those distances :)

Too fun. I love this idea and am so very proud of all the munchkins you ate. Sorry they didn't count for more time off.

Save a place on your couch, I'm visiting next year. I miss dunkin donuts!

Great idea for a race.

sounds fun. the thought of eating donuts and running makes me wanna gag but this might work!! lol
Def should get MORE deductions for the more donuts you eat.

I have no idea what a Munchkin is but Doughnuts and I do not get along.. I would have DIED from stomach rot mud race..

What you could only get 30 seconds off? Dumb. But I do think it's cool that a highschooler (who oddly could have been your child...are you sure you only have 3?) thought up a more orginal race concept.

Either way this way the race for you. Look at the smiling sugar crazed face! Congrats to you and J on another race together.

Yep! Striped socks (with a slight Dunkin' Donuts color-scheme, but I'm pretty sure nobody else noticed) was me! Your skirt was tooooo cute, by the way. Do you make yours or get them somewhere fabulous?? I will definitely see you sometime at another Richmond race. I'm just an hour away outside of Charlottesville.

They really need to do a run like this around here. It sounded amazing...minus the 3 minute munchkin limit...

Wait...what's a munchkin?! I keep getting the image of the munchkins from the Wizard of Oz in my head, but since they A) wouldn't fit in those cups and B)have nothing to do with donuts, I'm guessing I'm a bit off base here!

There is nothing extreme about 3 munchkins. Some day you and I will have to go to the Krispie Kreme run where I think you eat a dozen doughnuts at the half way mark.

Fun! I wonder if they have one like that with beer.

This is so funny. I love the idea of serious eaters/serious runners divisions. And I'd really like to know what a munchkin is - we don't have them here.