Photobomb - Dizzle lost her 5th tooth on Tuesday. Like always, she freaked out when I told her I was going to pull it and five seconds later when it was out, she was still screaming in fear. When I told her I was done, she said, "Oh. That was easy." Obviously, she's is all about the drama.

Afterwards, she asked me to take her picture for Facebook. She said that she did not want Doodle to be in it. So, we put her tooth in a bag and I snapped a quick shot. 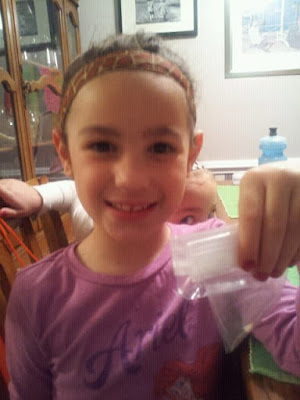 Epic Photos - Speaking of pictures, mine from the NYC Marathon were awesome. If I wasn't so cheap, I would totally buy some. Here are a few of my favorites. 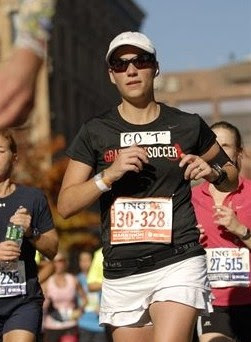 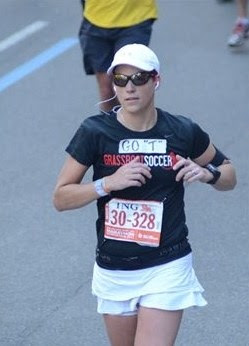 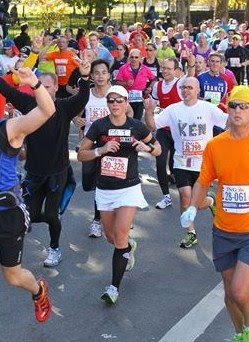 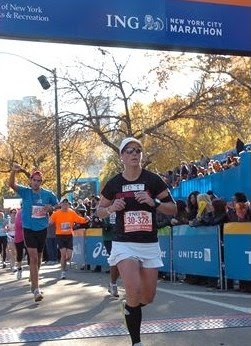 Round 2 - And since we are on the topic of marathons, I am running my second in six days on Saturday, the Richmond Marathon. Unlike NYC, I'll have my posse and a ton of friends running this race with me. If you feel like stalking, my bib number is 2224 (how wicked cool is that) and if you are out on the course and want to look for me, I'll be sporting the same outfit as G. It looks like this ... 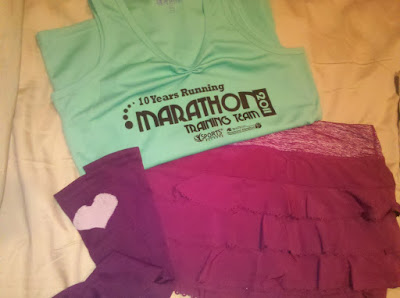 Love the photobomb!
And your pics from NYC just prove what an amazing runner you are..you look great!

That first picture is hilarious. Shoo would totally do the same thing.

Have fun at Richmond running with your posse! Are you running for fun or racing?

That photobomb is awesome!!

Your pics from the marathon are so good! You look great!

Dude, it's NYC! Buy the pictures! LOL I'm too cheap but if I ever get to run in NYC or Boston, totally buying those pics! :D

Love the pink skirt; is it a running skirt or just a regular skirt??

Love the photobomb!
And love the lulu skirt! I have the same one in black. I may or may not be addicted to lululemon :)

I hear ya' on the pictures. I always just print screen them. They've got to be stellar pictures to even consider buying them.

And a second mary in 6 days! I'm impressed.

Great pics! You and G are going to kill it this weekend (and look adorable!)

I get to stalk, I mean TRACK, you twice in one week!! Enjoy every second!

I love the photobomb. My 4 year old would have totally done that to my 6 year old. And you look awesome in your NYCM photos. I am jealous.

That is actually an advanced form of photobombing called creeping. Very hard to pull off. (Saw Harry Connick Jr explain it on Ellen.)

I remember the fear of having a tooth yanked! No matter how many times my parents provide it did not hurt, I never believed by the time the next one was hanging by a thread. :shudder:

If I was a grandparent, I would want a whole photo book of bombs from the kids. TOO FUNNY

Love that photobomb! So funny!

You are right. Your marathon photos are awesome. You look so focused and strong. Did you pay off those photographers?

Love your skirt for Richmond. So cute.

Love the photobomb!! After crying through G and Amanda's post, I needed some laughter!! Love the pics of New York! Love your outfit - you sporting purple hair too? Have fun and go rock your 2nd marathon in SIX days!!! Amazing!!!

HAVE SO MUCH FUN!!!! Love the outfit and know you will rock it. Hope it's a great race for you and the posse. :)

ha! I love the photo bomb! Cute outfit.. I need help picking out my outfit for my race next Sunday.. I just bought the hot pink running skirt.

Love your first NYC pic! those are great. Have fun at richmond!

OMG..that first pic. of you from the NYC marathon is awesome! That is the type of pic. I would have to buy b/c mine always turn out so bad!