my introduction to Crossfit ...

"Once upon a time, there was a girl who was know for being strong. And tough. When she was in high school, she could bench press her own body weight, which is impressive, considering she weighed 220 pounds. For fun, her track coach had her push his truck around the parking lot. She was a beast and everyone knew it. After college, she switched gears. Heavy weights and insane workouts were replaced with 15 pound bicep curls and long distance running. She lost 70 pounds and never looked back. Until a friend convinced her to buy a LivingSocial deal for Crossfit ..."

That's how I ended up where I am today. I caved to peer pressure and bought that LivingSocial deal back in June. It took me until last week to build up the courage to go.

On Saturday morning, I headed to my first class, which upon arrival, I found out would be a one-on-one experience. Apparently, no one else was interested in the free sufferfest that lay before me.

Class began with a light warm-up that instantly made me regret running eight miles earlier that morning. After a quick overview of how workouts are structured and a briefing on all that Crossfit terminology, we got started.

We started with the Push Press, which despite 10 years away from the weight room, I actually remembered how to do. First was a set of five with just the bar, then another five reps at 65 pounds.

OK, I can handle this.

Then came pull ups. I was told to try a set of five. Instead, I laughed. Who in the world can just pop out five pull ups on day one? Not this girl.

I ended up trying and completed one dead-hang pull up. Go me! I jumped down and was given a band for assistance. Wrapped around the bar and my foot, this band "assisted" my pull-ups by "eliminating" 60 pounds of resistance, leaving me with 100 pounds to pull up. I love that band. It made the first set of five a piece of cake.

Finally, we moved to the rowing machine. I was shown proper form and tested it out. Once I was done, the real work began - the WOD.

I was hoping it was a joke. I was already feeling it from our practice reps. And I was no fool, I knew that even though it sounded short, 12 minutes was going to feel like an eternity.

I got set up and the timer started.

It took me 2:30 to finish the first round. And as soon as he called out the time, I knew I was screwed. I totally failed to pace myself. My go big or go home mentality had me blazing at the start and struggling to catch my breath by the end of the first round.

It was yelled out that I could still finish a third round. I felt spent and really thought that I didn't have enough strength to not drop the bar on my head. But, I knew I wasn't going to stop.

When I finished the pull ups, I was told I had 35 seconds left. So, I rowed like there was no tomorrow.

I have never been so happy to have 12 minutes be over in my entire life. But at the same time, I felt like a total bada**.

Then I flipped over my hand and saw this ... 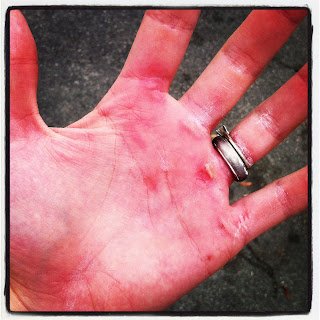 And honestly, I didn't even care. I loved the workout and I can not wait to go back.
Posted by TMB @ RACING WITH BABES at 1:57 PM

Courtney @ Journey of a Dreamer said...

Crossfit is SO addicting! Feeling like death and a bad A at the same time is the best. thing. ever.

Crossfit has been the best thing I could have done for my run...I've gotten so much stronger as a runner by adding Crossfit into my workouts. My recovery time after my marathons has gotten much easier compared to before when I didn't do any real strength training. I've been CFing since February and can't imagine not doing it...I've tapered back b/c I did 2 back to back marathons but am itching to get back in the box.

haha. drank the koolaid. Nice. you're definitely a bad a**. nice job.

Oh my gosh...your hands. Everyone I know who does Crossfit loves it. I am not at all surprised that you do too!

I hope your Crossfit is cheaper than it is out here. But, I guess if I paid that kind of money I definitely wouldn't skip it, ever!

So tempted to book flights to Richmond for April today! The fares dropped to where I started looking a few weeks ago. I need to wait...they've got to drop more, right?

Nooooooooooooooooo! Well you already have the socks.... Look out, she'll be doing Crossfit Endurance in no time...

Boom! That a girl!

I want to try this SO BAD because I've seen how ripped a friend of mine got while doing it, but the crossfit gym here is crazy expensive.

I ADORE Crossfit. So glad you've gotten into it.

CrossFit has been the best thing to ever happen to me, fitness-wise. It is addicting! Hope you enjoy continuing to go!

I KNEW KNEW KNEW you would love CrossFit--you're athletic and endurance background are going to make it so much easier for you to IMPROVE quickly!! WOW!

*Cheers* to your cup of CrossFit kool-aid! After I started CrossFit in February, I PR'd in the mile, 5K, 10K, and half marathon all by May 1. Last month, I set a mile PR during a 5K PR. You'll be a fire-breather in no time at all. Those hands tell the story!

I was bullied on the playground as a child by a small girl. I am now a 26-year-old man, and I still know not to mess with girls. Nice post.

I was bullied on the playground as a child by a small girl. I am now a 26-year-old man, and I still know not to mess with girls. Nice post.

Cross fit is brutal! Awesome for your running strength though. Most runners do not do much strength work. Check out this book for your kindle http://amzn.to/WmtjO8