I think like most women, I have a love-hate relationship with the scale. I don't want to feel tied to it, but in the same breath, I care what it says. In the past, the scale has done nothing for me but tell me minimal information about my relationship with gravity. It definitely wasn't a tool in my weight loss/management arsenal. If anything, it was just an item of fear.

But, that was my old scale.

Recently, I was given the opportunity to test the Fitbit Aria Wi-Fi Smart Scale {retails for $129.95} - the most hi-tech scale I have ever seen. 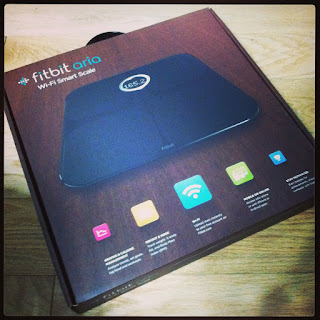 The Fitbit Aria, which records weight, body fat percentage and BMI, automatically syncs your numbers to your Fitbit account via your web account or phone app, making it the ultimate tool for tracking your progress.

To begin, users download the free software and visit the Fitbit website to set up an account. From there all you need to do is turn on the scale and follow the step-by-step directions to connect the Aria to your home Wi-Fi network. The scale takes care of the rest. 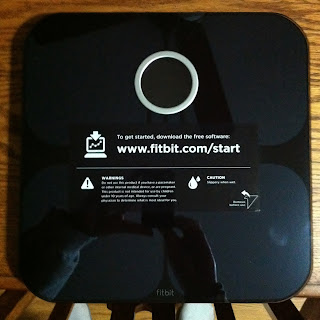 Seriously, this scale does EVERYTHING.

Not only does it record weight, body fat percentage and BMI, but it automatically recognizes (I have no idea how) up to 8 individuals per scale, meaning the whole family can utilize this tool. Additionally, as I mentioned, it will wirelessly sync that information to your Fitbit account (or app) where you can track your exercise, food and water intakes and numerous other data points, such as blood pressure and heart rate. (Note: this number geek LOVES this.)

What is that you say? You already have an app that does all of that? And you love that app?

No worries. So did I. (Note: Honestly, I didn't like the food tracker in the Fitbit app, due to the fact that I was unable to find a way to scan in the bar codes of the foods I ate.)

And Fitbit knows that we have other tools in our weight loss/management arsenal that we are already tied to. The Aria is not meant to replace those tools, but rather enhance them. In fact, you can link your Fitbit Aria scale to your My Fitness Pal, SparkPeople and Lose It apps, as well as several more which can be found on the Fitbit website.

Basically, you can't lose with this scale. Oh, wait. That's exactly what you'll do with it.

Disclaimer: I received this scale free of charge, however, the opinions stated here are fully and entirely my own.
Posted by TMB @ RACING WITH BABES at 8:33 AM

Just became 1000th member of your blog...I am an older mom working on her fitness and running...Nice to meet you! I am working on a new blog...
www.bethannejohnson60.blogspot.com

Very cool! I love Fitbit as a company - had the opportunity to work with them when I was integrating them to Google Health.

wow, that ALMOST makes we want a scale!! Seriously and I'm a scale HATER! What can I say, I'm really dense... I have a thing about how much a weigh :D

curious-did you use a fitbit? i'm anti that brand. the fitbit was always off on my runs and daily activities-by many, many miles so I stopped using it. figured the scale wouldn't work either...but glad you liked it.

Sounds like a fabulous scale. I'm curious too as to whether you need a FitBit arm band with this as well.