Girl's Weekend: This race had been on my schedule since last September when Kim suggested it to G, Erika and me. Within moments, it became a Girl's Weekend. When we weren't racing, we were catching up, learning about Virginia and North Carolina history, eating and exploring the sights.

It was awesome and I loved every second I got to spend with these ladies. Seriously, who says you can't meet people on the internet?

Z2: Due to some unforeseen issues (more in a sec), I was not able to pick up the pace as I had hoped to. However, this race turned into the perfect Z2 training run. I ran controlled and consistent and I could have ran for much longer. Sure it was a racing fail, but it was a training success.

The Course: I loved this course. Like super loved this course. The first nine miles or so were flat and shaded. The next three miles were on "packed" dirt/sand. For the most part I didn't mind this or the rolling hills that accompanied it. Then there was the last mile. Pure torture. But, since I loved the first 12 miles so much, I'm just going to ignore that the final mile ever happened.

The Bling: I'm kind of obsessed with it. 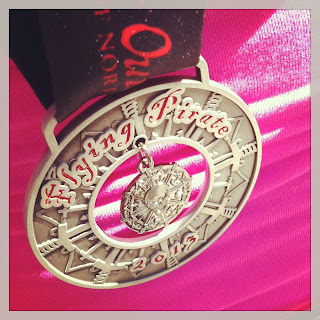 Finishing: Thanks to "The Ugly" part of this race, I was ready to be done. The last mile and stomach cramps had me praying to be done. Plus it meant, I got to hang with these ladies again. 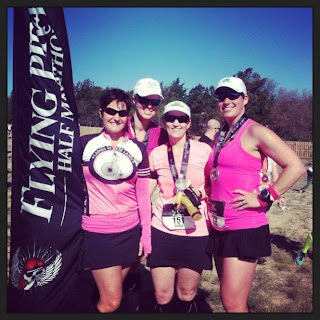 Costume Contest: There was a costume contest associated with this race. When I saw it mentioned, I thought nothing of it. After seeing the epic things people come up with as running costumes here in Richmond, I didn't think we could ever stand a chance. But I was proven wrong. It was nothing but a lame fest. The four of us could have easily won and shared this trophy throughout the year. 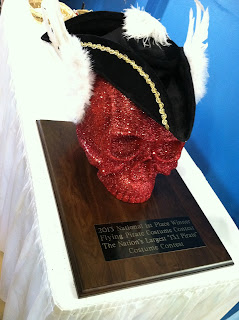 The Drive to the Start: G was awesome and hosted us at her dad's place in Buxton. Unfortunately, we didn't look at how far Buxton was from the start of this point-to-point race. Not that it would have really made a difference, but I would have loved a later wake up call.

Bathrooms: There were too few (and too far between) on the course. Some days I might not have cared, but this day it was my biggest grievance. Water stops weren't much better.

Mile 13: Let me say this again, I loved this course. Mostly flat in the first half. Gentle rollers in the second. But mile 13 was a nightmare. Picture a narrow trail with light to moderately packed sand covered in pine needles and then add hills. It was slow going. And ugly.

Bathroom Issues: Honestly, sometimes being a female sucks. Just prior to the start of the race, I was hit with my period and some serious cramps. Unsure as to whether or not the cramps were caused by my new "running mate" or by a need to use the bathroom, I started the race. By mile two, I knew I needed to find a bathroom. When I got the opportunity (between miles four and five), I thought the feeling had mostly passed and I would be fine. Little did I know, I was severely mistaken. I thought there would be a bathroom at the mile six water stop, but I was wrong.

I started contemplating asking spectators if they happened to be close to home and if I could use their bathroom. There was no where to duck off the course and honestly, without toilet paper, I really didn't want to. Right around that time, I saw G on her bike coming the opposite way.


I yelled, "When was the last time you saw a bathroom?" She said she thought it was at about mile eight - over a mile away. It turned out the bathroom was at 8.6 and it was the most amazing thing I'd ever seen. A few minutes later, G caught me exiting.


I felt much better, but I knew I was going to need another bathroom, which unfortunately didn't show up on the course until mile 11. The rest of the day was merely a continuation of my stomach troubles, when I got home (feeling completely off) I took my temperature and was running a 100.4 fever. Guess it wasn't my day.
Posted by TMB @ RACING WITH BABES at 12:01 PM

You have had the worst luck with halfs and being sick. Still, glad you got to enjoy girl time and pretty sights!

Boo to bathroom issues! Oh god how I know that feeling (coming from the girl who DID ask a random stranger on a marathon course to use their facilities).

But despite that, it sounded like an awesome weekend :)

I did that race last year. It was my first half and my favorite so far! Love your pictures with the beautiful weather. The weather last year was HORRIBLE with constant rain, although it wasn't cold. When we got to the "packed dirt/sand" there were ruts filled with water and we couldn'st see how deep they were. So afraid of twisting an ankle! That was when the rain went from constant to torrential downpour! The last mile taught me that I can tell my body to do so much more than I ever thought possible. Huge mental victory in that last mile! Loved it and hope to do it again next year!

races and periods should not go together! I'm sorry I hope the next one is better! But glad you had fun!

Sorry about the GI problems but love that you were able to take this as a good training run.

GI issues and period cramps are the WORST during the race... having both at the same time, MISERABLE. Congrats on sticking through and finishing. Your photo of the medal is WAY better than Kims and actually does it justice :)

Glad you were at least able to make it through the race! Hope you're feeling better soon!

Hope you kick the GI thing to the curb pretty quickly. Sucks to spend most of a race looking for a P-o-J. Glad the beautiful course sorta helped make up for it, though. And...nice medal! :)

yikes-so sorry you didn't feel well...glad yall had fun though!

Glad you had a great time.. you look adorable! Looks like I will be running Nike with an extra special running mate, not looking forward to that!

Glad you had a great time of it. I actually came in a little bit ahead of you. You probably passed me at the finish some where. Yeah, that last mile was something else huh. Often times, I found myself stuck behind walking people there due to the lack of room. I am use to having water station every 3 miles so this was okay. How bout the medal!!!! Awesome!!!