In case you haven't noticed, I am kind of competitive. Not only with myself, but with those around me. Even if they are not competitive in return. (Seriously, why don't some people get that EVERYTHING is a competition? So frustrating.) Anyway, I am constantly trying to one-up myself. Which is good. And bad. Sometimes I just take on too much. But worse than that, sometimes I don't know if it's too much until it's too late.
Here's my dilemma. I really want to earn Half Fanatic status. Thanks to G, I have become aware of a half in Williamsburg (about a 45 minute drive) that is on February 28. Exactly one week before Disney. This race would give me 3 half marathons in a 90 day window AND 2 half marathons in a 16 day window. So basically, I'd be set. The only problem (other than convincing J) is that I really think Disney is the race that could give me that 2 hour half I am looking for. And I'm not sure I want to risk that. My thought is to run Williamsburg at a controlled pace of 9:30-9:45 (which would still be a PR) as sort of a practice run for Disney. Am I totally nuts? Should I just find another half to run after Disney that falls in the same 90 day window? Should I just wait until next year for the Fanatic thing?
On a lighter note, I ran an awesome 12 miler this morning. Here I am looking super cute. 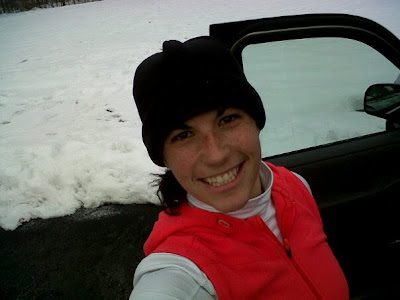 I started out on the treadmill, which I quite like. It's really nice being all toasty when you step outside. After about 6.5 miles I joined the Stroller Strides 10K training team, which I am helping out, for their long run. Once we got back, I picked up the pace and finished my run. It was one of those runs that you don't want to end (although I wouldn't have minded it being a tad warmer). I finished in 2:02 and considering we were running 12 minute miles with the training group, I was quite happy with the overall pace. I was really pushing it in the last two miles.
So, how was your long run?
Posted by TMB @ RACING WITH BABES at 10:38 AM

I don't know what your experience is so I cannot give you a straight answer. I think you will be fine and your only enemy may be the weather.

If you can find a close race that doesn't disrupt life too much, I vote you go for it. GOod luck!

I think you should go for it!

I feel like a crack dealer enabling an addict... You know I think you can do both, and do them both well. AND seriously, you could be the first in the group to get Half Maniac status... or whatever it was called. You know I'd SO do it with you if I could. But, seeing as its only a few "long runs away", I will hopefully be up to 7 miles by then.

Hmmm...I think you could do it. I'm running a 15K race the weekend before so not as long as a half but you are way more prepared for this than I am. As long as you don't go too fast and keep yourself under control for the first one it should be good.
I don't know if you follow runninglaur.blogspot.com but she is just finishing her third half in three weeks! Check her out...

DO IT! It sounds like you're in stellar shape and can rock both of them!

I received the package that you sent. Thanks so much. I really love the socks...so warm and comfy!!!

If you did 12K today, there is no reason why you can't run a half before Disney. If it were me, I'd do it; otherwise, I'd end up wishing I did and then complaining that I should have.

I had no idea about this Half Fanatic club! I could very easily be in...do you have to do the 2 halfs in 16 days AND 3 in 90 days, or just either or? WTG on a great 12-miler. Although I've had a certain amount of dread when I think about my long runs lately, they've actually all been great! Keep up the good work!

I say go for it with the halves! Why not? I think it would be great!

Awesome way to get your long run in. I just did all 15.5 on the treadmill...still watching movies. Maybe tomorrow it will be nice enough to take the littlest outside for a short run.

Have a great Valentine's Day

I think only you know if your body can take this...and let me remind you of this little saying: You are more likely to regret not doing something, than doing it! :)

I can't do a race without competing no matter how I say I am going to run it. You know yourself best but I might just concentrate on the Disney one.

mine was a fabulous 8 miles on the treadhell. Seriously I don't knwo how you do it...after 2 miles I want to ram my head into the handle bars. Thanks snowmagon.

I think if you have an A race that you focus on that. There will be plenty of time this summer to work toward your 1/2 Maniac status!! But I am competetive too, so do what your HEART tells you..

Go for it! I ran a sub-2 half (barely) one Sunday and then managed a 2:04 half the next weekend on a very hilly course, to get into Half Fanatics last year.

Another option is the Charlottesville Half one day, followed by one in Leesburg the next. Those are a little farther from you, but not too far... And I might be persuaded to join you...

I didn't even know there was a 1/2 maniac status. You do look super cute in that pic!

To get the status do you have to do everything in the level or just one of them? I'm pumped because I would qualify (yeah, everything is a competition to me too).

Go for it!!! Love the Disney course, it is fast IF you can get towards the front. There are so many first time racers there but you should be able to get a good corral placement!!!!