my birthday run and YakTrax review ...

If you haven't watched The Weather Channel recently (or listened to me complain), you might not know that good old Virginia has been hit with three major snow storms since mid-December. This has led to me logging endless miles on my treadmill. My treadmill that I love. That I am beyond grateful for. That I will cry about when it dies.
But, I needed to run outside. To run with my teammates. I had the itch and it needed to be scratched. But, I am not crazy. I know I have a less than stellar ankle. I wasn't about to risk falling unnecessarily. So, I went out and purchased YakTrax. (Note: by went out, I mean called every store in the Richmond area that might possibly have them, then begged for the store to hold them for me. Thanks REI!)
I ended up with these. YakTrax Pro. 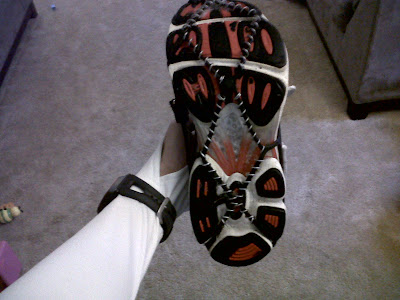 Here is the what YakTrax has to say:

Yaktrax have a unique, spikeless, patented coil design, unlike other products on the market.
The Yaktrax Pro will instantly give you better traction, confidence and safety on packed snow or ice. Move about naturally with the same solid grip that you are accustomed to on dry surfaces. Walk or run as you normally would and experience stability on ice and snow like you have never felt before.
Made with high strength, abrasion resistant 1.4 mm steel coils and heavy duty natural rubber material, the Yaktrax Pro easily conforms to the shape of your boot or shoe. With its patented SkidLock coil design, the Yaktrax Pro provides 360 degrees of traction on packed snow and ice and can be worn in temperatures as low as -41° Fahrenheit.

So, what did I think?


Overall, they rocked. Super easy to use and I didn't slide at all. And considering the amount of ice we were running on, that says a lot. (Some of my un-YakTraxed friends were not as lucky.) I'm not 100 percent sure how much I would have slid without them, as I wasn't about to test that out. But, either way, wearing the YakTrax gave me a sense of security on some tricky terrain.


There was one thing that bothered me though. I wore a small, which is for sizes 6.5 to 10. I, being a 10, probably should have gotten a Medium. I felt throughout the run that my big toe was being pulled back (not painful, just kind of annoying). Maybe it was the size, maybe it is just the design. I'm not sure. Regardless, I wouldn't attempt another icy run without them.


OK, back to my run. So, I was itching to get out. Since we had planned an eight mile run around the lakes at a local park, I needed to get a few more miles in before I met up with my friends. This meant waking up at 6 a.m. to get in three on the treadmill before leaving. Definitely a good idea. I was nice and warm when we started the eight miler, but it was SO DIFFICULT changing my outfit. Between the sweat and the heat. Ugh!


Anyway, we did two loops around the lakes. Picking up and dropping off people in between.

Here's the group at the start: Kate, Me, Dee from BitsNPiecesofMe, G and Fay 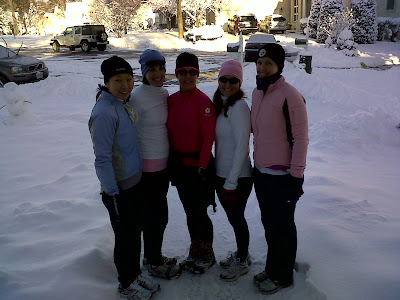 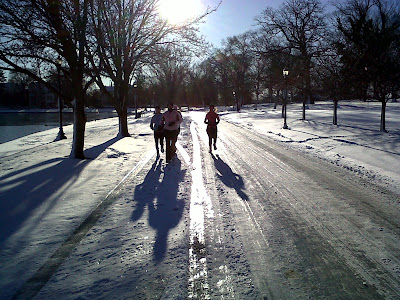 Despite being super cold and kind of treacherous, it was so much fun. I had really missed running with my team and it was totally worth getting out of bed super early to be with them. And I'm sure that everyone who passed us either thought we were super hardcore or completely off our rockers. (I'm not really sure which one is true.)

Here's Court and I after the first loop. 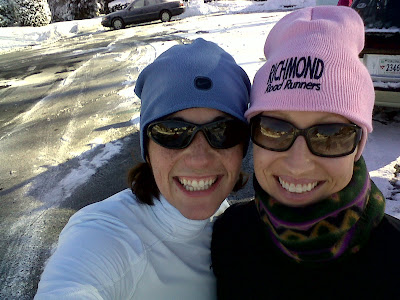 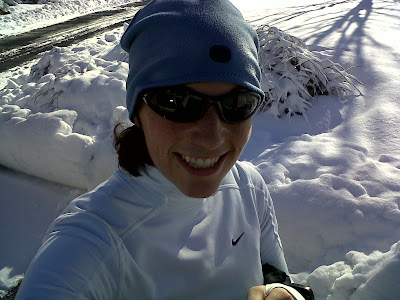 Isn't running with your friends the best? I couldn't have imagined a better way to start my birthday.
Posted by TMB @ RACING WITH BABES at 2:17 PM

OMG- I missed running with my mates. Wow. It is SO different than running alone. Thanks for breaking the run into the short distances so I could come. It was the best!

So, after nearly biting it big time today, I decided I need a pair of YakTrax . If you decide to get a medium, I'll buy your smalls off you (incase I was to call REI & go out and buy a pair, say... tomorrow, with 5 kids in tow, do I call you first and pick up a medium instead?)

What a great way to start your day! And beautiful pictures. Isn't running just like a new adventure every day?

Sounds like YakTrak made a big difference! I'll have to get some quick, another storm on the way for Tuesday!

HAPPY BIRTHDAY! That picture of you guys mid run makes me want to move north! Ok maybe not, haha, but I do miss when the snow looks so pretty like that!

I left my Yak Trax in Vermont and have no idea where to get them in DC! !! I think they may just be a loss for this season. WHO KNEW we would have SO MUCH snow!? Argh!

I'm so jealous of everyone with awesome running groups. since I'm between TNT seasons I have been trying to go solo...and lets just say failing. oh well. ps: I adore your freckles! I'm a freckled girls myself but yours are too cute!

I wear YakTrax in Vermont. Couldn't get through a winter without them. But I haven't needed them lately. Your pictures are beautiful, especially the 2nd one.

love all of your pictures! very inspiring to have lots of friends to run with. i may have to get those YakTrak...we have lots of snow and ice in indiana.

Glad you were able to get out and run sometimes you just need to run outside. That's awesome that REI held the Yak Traks for you.

That sounds like a great time and the pictures are really beautiful! Yay for yaktrax...I am so getting those next year :)

Happy Birthday to you!!!! I live in upstate NY and have braved running on the snow and ice many times and also slipped many times. Am thinking I really need a pair of Yak Trax. :)

Awesome! I need to buy some yaktrax one of these days.

Yay for finding a way to get outside! Great pictures!

What a great run! Gorgeous pictures. Way to enjoy the day!

Happy Birthday again!
I love my Yak Trax and although I don't live where it snows, I go to where it snows on a regular basis and couldn't run without them!
Awesome job on the run! I love running with friends :)