I'm not sure who got the memo last night. But, it's official. Dizzle has a broken elbow. AGAIN! 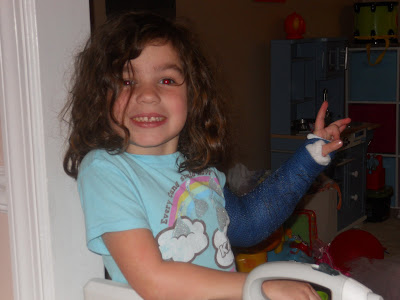 Just like last year, she went for her follow up appointment and the x-rays revealed a crack. Poor kid. So, she'll be rocking a cast for the next three week. She's taking it all in stride. Although, she did cry when I told her they were going to have to cut it off. To read how she reacted the last time she had a cast removed, click HERE.
Even with the cast, she asked if she could go on a run last night (can I just say I love that I am brainwashing my children?). So J took both Dizzle and Doodle out for part of his run. Here they are just before heading out. Yes, they know how to rock the socks too. 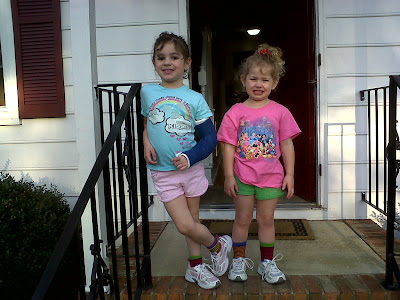 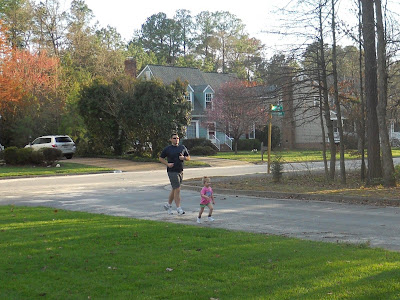 Then Dizzle jumped in for .85 in 13:04 (from what J tells me Dizzle runs like me. Super fast out of the gate. Her first .3 was in just over four minutes). 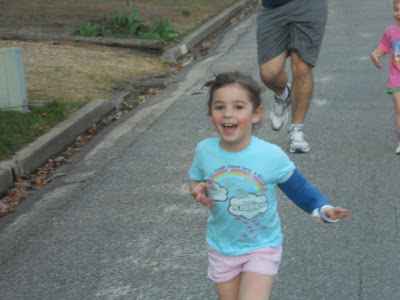 Dilly was there too. She can barely walk, so she serves as a better cheerleader right now. But, she is wicked cute. 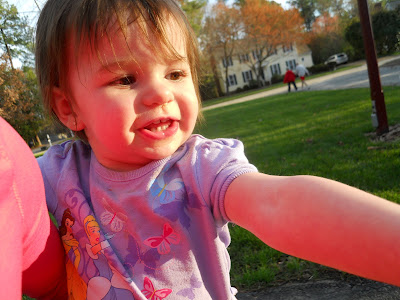 Afterwards, I took the girls in so that they could "refuel" with some G2, and J finished his run (he's eight weeks out from his first half marathon!) All in all, another super evening in the Blanchet house ...
And don't forget to check out my Run Like A Mother: The Book giveaway!
Posted by TMB @ RACING WITH BABES at 10:25 AM

I can't talk how about cute this post is and the pictures of my little babies. I love it. Can't wait to see you guys tomorrow!!

Awwww....so cute!! I love that they are being brainwashed ;) haha

So cute... now do they have "official" running shoes or just regular shoes. My 6 yr old is interested... so I am curious.

OMG! The girls with their socks up is priceless!
Poor Dizzle! Actually, poor you! I am sure bathtime and hand washing is a blast! :p
Love that your fam is out there with you - I'm working on Ari to join me someday :)

That is the best post I have read in a long time!!! My son asked me this morning to run to the car and I asked him if he wanted to run like mommy and he said yes please!! I was so stoked!
I love the socks. Even this barefoot runner is tempted to wear minimal shoes just for the socks!

Such adorable cuties!! Love that they run and/or cheer :)

My daughter broke her elbow 2 summers ago and had to have surgery. She had the same cast as your daughter (same color too!). I never met/heard of another person breaking their elbow!! I hope she heals quickly!

I love that your daughters want to run with you

Awww I seriously love this post! I love running with my little girl too. I can't wait to some day run an event with her! :)

That is so cute! I love all the pictures :)

I love the pictures! They are so cute! Slip me that brainwashing program. I need it for my middle one.

I hope the elbow heals quickly. Poor kiddo! Praying for no problems.

Poor thing! But she's clearly not letting it slow her down!

Oh crap, sorry to hear that! Here's hoping she heals well and hangs in there for the meantime. Cute pics!!

Cute pics. Its so nice that they get so excited for running! I love their socks too!

poor little chickie! I hope she feels better soon! I love that they are running it is cute!

LOVE it!! Your girls are tooo cute.. My Little Studs already have arranged marriages or I would be chatting with you :)

Bless her heart!! Looks like she is following in mommy's footsteps and not letting anything slow her down!!
Too cute!
Love the new header pic!!

Poor Dizzle! I bet the run made her feel better, at least :)

That arm didn't seem to bother her running spirit one bit. Way to model for your kiddos.

Elbow ouch. Looks like you got some future runners in your fam (brainwashing or not)

They are too cute! You live in a lovely neighborhood.

Ohh. Too bad about the broken arm although she looks pretty cute in the pic. The pics of them running are just precious too!

poor thing! What happened to a pink or purple cast??? Tell her, when I was little I broke my arm and had a pink cast, and I thought it was SO cool, until they went to take it off and I, too, had a break down.

What an awesome influence you guys are -- too wonderful that they like to run, too!! Maybe they'll all be running the princess half together someday with their tiaras?!?

So cute and I loved that you have stats for them too. I need to do that for Max. Your daughter with the cast looks just like you...mini me!

So sweet. Love the pictures. Isn't fun when you kids pick up a good habit from you? I love it.

If she is still apprehensive of getting the cast cut off perhaps you could renact the event on a favorite doll OR let her play and touch and see the tools BEFORE the procedure. If all else fails blow bubbles and play with an I Spy Book or a favorite toy while they are cutting it off. I'm in Child Life and if the Doctor/Hospital doesn't have it available then these are some tips of what we do :) Sorry to butt in I just dislike traumatic hospital experiences when they don't need to be!