J and I don't get a lot of alone time. With three kids, babysitters aren't cheap. And our nearest family member lives three and a half hours away. And we never run together. For a multitude of reasons, including but not limited to: our differences in pacing and mileage, the fact that he's too tall to push a stroller (6'7"), the fact that I CANNOT run any significant distance pushing a triple, that whole babysitter thing. BUT, since we had some guest in town this weekend, J and I (along with H and her J) were able to sneak out for his long run. (Remember how I mentioned that J is training for his first half marathon right now?) Here's everyone pre-run. H's hubby is not a huge running fan, so he biked instead. 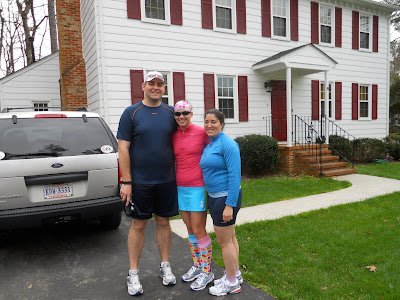 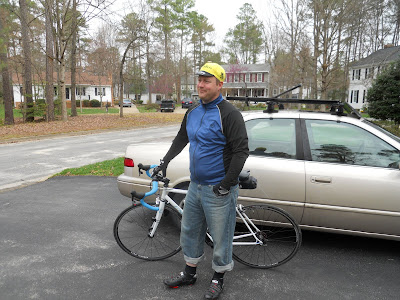 We set out for six miles. J warned us about the pace. And honestly, I was concerned. I always have a hard time slowing my pace to run with him. But I tried. And if I pulled ahead, I looped back to get him. We had a blast. And took a ton of pictures. These ones are my favorites: 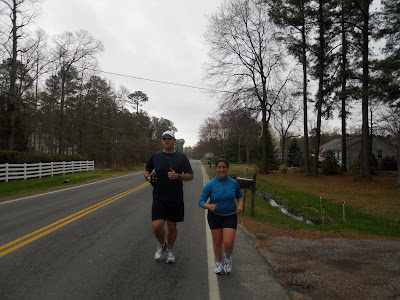 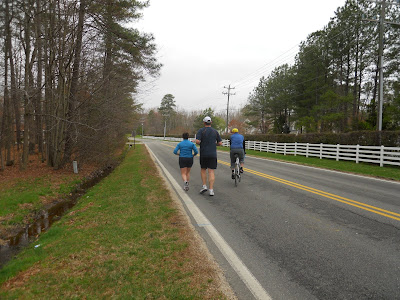 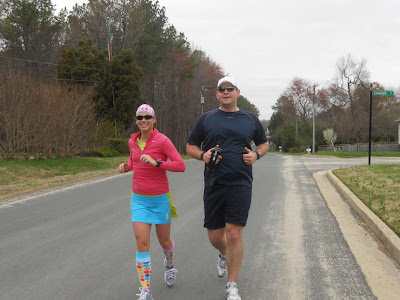 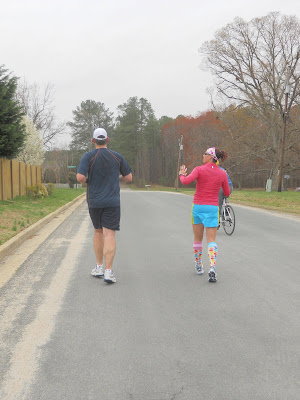 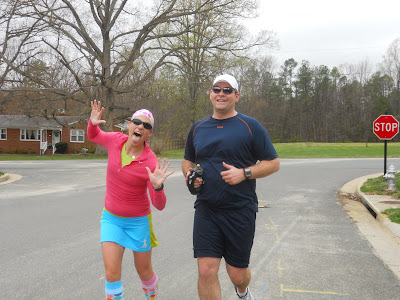 J even felt so good as we approached six miles that he decided that we would go seven instead. (He's getting sucked in!) Anyway, his race is on May 16th. The girls and I were planning on cheering him on. But now, his parents will be in town that weekend for Dizzle's birthday. So, I offered to pace him. I really hope we can convince his parents to watch the girls. He supports my running so much that I feel like this is the least I can do for him in return.
Posted by TMB @ RACING WITH BABES at 10:56 AM

That is so awesome! I'm glad you were able to run with your husband. I totally understand the inability to be able to, when they're kids and sitters and everything else to figure out. I totally miss running and working out with my husband.

Love the picturs. You are too cute! (And you would have a hard time slowing to my pace, too!)

That is really awesome that you guys were able to do that. I hope you are able to pace him in his half! Cute outfit, btw!!

Very cool. I think it would be really nice if you paced your husband during his half. Great way to share that together.

that' so great! my J hates running. Football has turned it into a punishment boooooo. Love the pictures! What half is he doing??

So great that you ran together! I love that. I dream of the day I could convince my hubby to run with me. :) You guys looked great out there. I hope it works for you to pace him for his first half!

Looks like you all had a great time. Your neighborhood is beautiful.

That's awesome that you got out for a run with hubby! Hubby and I don't get out together for runs often either. We are thinking of making it a date night one Saturday!

I hear ya about the babysitter issue! With four kids we hardly get a babysitter either. I used to get $1 an hour when I was a babysitter - things have changed! :) And our closest family is 8 hours away!

Anyway . . . I think it is great that your husband is training for a race too. My husband and I have run one race together in my 13 years of running! :)

Sounds like fun! Great job! Glad you guys got a good run in!

That's great that you were able to get out for a run with your hubby! Great pics!!

Good luck to him on his first half!

yeah for J!! I am trying to get Handsome sucked in....it is working slowly but surely!

Your pics make me smile because you are so COLORFUL out there! Who wouldn't want to run dressed like that? So fun!

Great job on the group run!

How fun! I'd love to be able to run with my hubby. Cute pics!

A great date, if you ask me!

Yay! I can see the photos now! (I visited earlier but they wouldn't load for me. hmm?) You look so bright and cheery. Love it! I love that you were able to get out and run with your husband. I think that counts as great quality time.

Looks like you all had a great time! I love the pictures. Your running outfit is the BEST!

I love that you are going to pace him in his race. I hope you can get sitters worked out. I know it's hard.

great photos and what a nice way to spend quality time together. love your whole get up you're sporting there! those are some nice roads and bike lanes you have there.

I love the photo of you two! I am so happy you got to run together. I cannot imagine not being able to run with my husband! :)

Awesome pictures and so great that you got to run together!!! Fun!

I love these pics. What a great way to have fun with your hubby and friends. I hope it works out that you can pace him!

That is great that you got that alone time! I wished my DH would run with me! Okay where do you get your SMOKING outfits? I love them and you work them perfectly!

You guys look great!!! How fun it would be if you could pace J on his first half :)

LOVe all the colorful running!!! You look phenomenal! And it's great that you could get out and do this together. That's so awesome.

Just curious --- how many running skirts do u have anyway, girl???

So nice you got running time together! I love running pics! It's not something normally captured but seeing that it's a favorite hobby of ours it deserves its camera time. :0) And congrats on getting the hubby into running!

Awesome pictures! Awesome that you have inspired your husband, too! It is so much fun running as a family. Good luck to him on his first half!!

how fun....i love to do things with my hubby too-working out together is great :)

Seems like everyone is roping their hubby's in lately, whats your secret? I love hanging out with my Hubby, running with him would be dreamy!