When Mel announced that she was going to be hosting a series of virtual races in an effort to help her reach her fundraising goal, I knew I was in. She has inspired me so much over the past few months that I knew a donation was the least I could do in return. But, being the thrifty (read: cheap) person that I am, I wanted to get the most race for my money. So, I planned on running the half marathon option. But, then life got in the way and I downgraded to the 10K. I was bummed, but figured I could easily rock out a solid 10K, especially after last week's 50:36 10K run (which, in case you were wondering, is 2:41 faster than my current 10K PR).
So, it was the 10K. For sure. Until Friday morning. When I realized that there was no way I was going to be able to get in a FAST 10K (since I do not race for the fun of it) this weekend. There's a lot going on. A bunch of out of town guests. Parties. Food. It just wasn't going to fit into the schedule. So, I emailed Mel and dropped to the 5K. And can I just say that this was the BEST DECISION EVER?
Since I was squeezing in my run (and the weather sucked) I opted for the treadmill. Here I am right before jumping on. 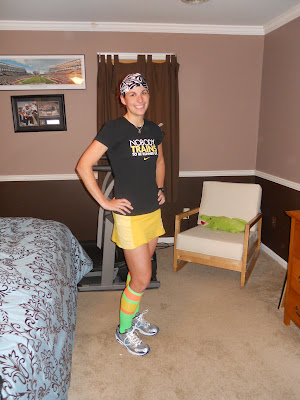 I wanted to run 24:59, as one of my goals this year is to run a sub-25 minute 5K. Anything else would be icing on the cake. I knew I had to ease in if I wanted to maintain the pace that I needed to hit my goal time. So, I ran the first mile at an 8:00 pace. I was feeling good and decided to speed it up. The next mile clocked in at 7:51. At that point, I noticed that my ankle started to ache. I decided to muscle through and picked up the pace (partly to hit my goal and partly to be finished). With about half a mile left, my ankle suddenly felt fine. I think it was because I really had to focus on my form to keep the pace. Or maybe the pain just went away. I'm not sure. Anyway, the last mile was AWESOME. I completed the final 1.1 miles in 8:18 (7:32 pace). Sweet, right?
Add that all up and I finished in 24:09!! A 1:10 PR!! Not really sure that I can officially count it as a new PR, but I'm going to. Maybe I'll just put an asterisk next to it. Here's the proof ... 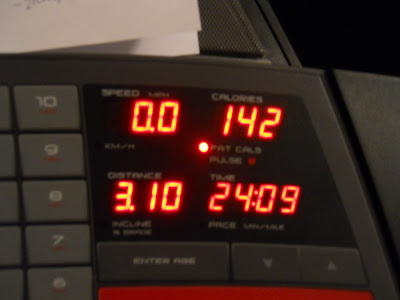 Overall, I am super pumped. See? 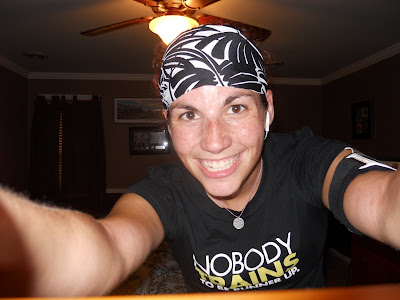 A virtual race is such a fun idea! You are one speedy lady! I have always focused more on distance. I'm pregnant right now, but after the baby is born, I am going to focus more on speed.

That is a TOTAL OFFICIAL time for you! You have to count it! Good job!! But...where's your race bib silly? Tee hee :)
Happy Saturday!

Good for you! You did AWESOME!

Great job and by the way once again you look super cute in your outfit choice. :)

woohoo!!!!! Awesome job!!!! One day I'll catch up to you Speedy McFly! :P
Love the after photo, you look thrilled for the PR...and to be done lol.

Awesome! Great job. You look adorable in your running get-up too.

geez Tonia you rock! That's awesome! And I LOVE how you still get all dressed up to run on your treadmill. Hopefully my Tall Mom VIrtual will go as well tomorrow =)

sweet! you killed that 5k! love your shirt and of course the socks totally rock!

Rock on T! That is an incredible run, even if it needs an asterik. Hey - are you rockin' the Bondiband in that pic? Have you done a review of those? Just wondering cuz Luisa and I are thinking of going in on a big order.

Congrats on the "virtual" 5K!

Excellent! You rock for sure!

Definitely, it counts! Running on a treadmill is hard work. Way to go.

Sheesh--great job on a speedy PR! That is awesome!

I picked up a fab pair of socks for the cherry blossom 10 miler!! I am sure you would approve!

NICE! I say it counts as a PR. YOu are one fast momma!

you truly are a great runner...and i really admire you! go girl!

YOU ROCK! That is so awesome! I admire you speedy women every.single.day. You amaze me!