Thursday sucked. Plain and simple. But thanks to some good friends (and quite a few bloggy buddies) I decided that Thursday's negativity was going to stay with Thursday. Friday was a new day. A day full of potential. And although, I had a new cheery outlook. I was still stressed beyond belief.
When I woke up, I had hoped that someone else would have cleaned my house and planned Doodle's party. Shockingly, that didn't happen. So, I spent the majority of my morning, cooking, cleaning and decorating. Things were coming together. Definitely on the upswing.
My morning of being Suzy Homemaker was followed by a visit to the Witch Doctor. In case you forgot, he's in the process of readjusting my pelvis so that my legs are the same length. It's working. I can stand in a neutral position, which is probably something most people take for granted. There has been a slight downside to the adjustment though (other than the huge time commitment. I drive 25 minutes each way, three times a week to see him). I am noticing a change in my running gait. Nothing huge, but my left side (the once shorter side) is significantly more fatigued than it used to be. He says this is because my right side had been doing the majority of the work and now it is equalizing. I had kind of perfected running unevenly. Now I need to adjust. It's really just more annoying than anything.
Back to my point, we headed back from the doctor and I scrambled to finish party prep. Somehow, it all got done (with a few minutes to spare). The party was fantastic. Don't believe me? Take a look. 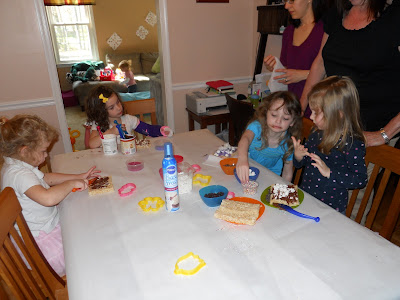 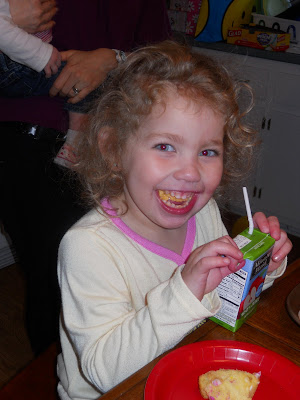 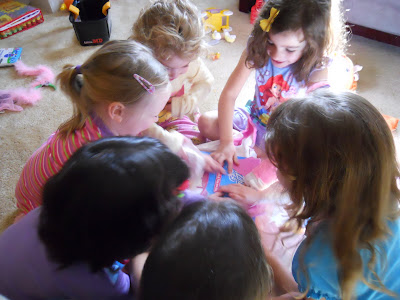 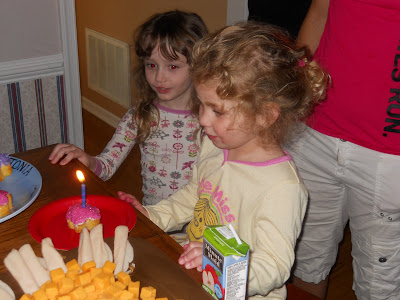 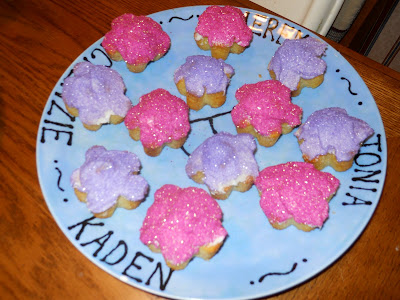 Doodle had chosen a flower theme. Note the cupcakes. Our main activity was a rice krispies treats decorating station. The girls loved it. After consuming a TON of candy, they all headed upstairs and decided that the party was now a PAJAMA party and everyone came back down wearing either Dizzle or Doodle's PJ's. It was hilarious! 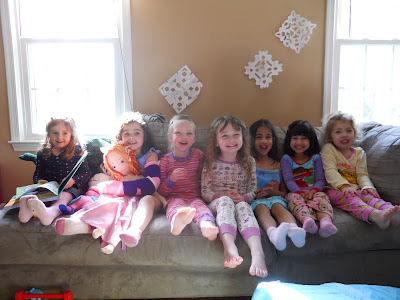 Once everyone left and I had put the girls to bed, I took a second to think and realized that Friday was just as jam-packed and stressful as Thursday. I just managed to keep a better attitude on Friday. And I was left feeling accomplished rather than drained. So, as a gift for surviving another day, I rewarded myself with a run (I know, only a runner would see that as a reward). I jumped on the treadmill for a core run. I would run a mile, then stop and do 100 crunches (working hard on Katie's challenge). I repeated this for five miles. It was a nice switch from my normal running routine. Plus, since I was breaking the workout into mile increments, I didn't get super fatigued (I averaged 9:15 per mile). At one point, I even considered doing 10 repeats instead of five, but it was getting late and I don't like to run too close to bed time.

Isn't it crazy the difference a day can make?
And don't forget my Training Tag-Alongs Giveaway ends tonight!
Posted by TMB @ RACING WITH BABES at 9:07 AM

Looks like the girls had fun. I'm just glad to see that people still do birthday parties at home. We did all mine that way and I loved them!

Life is so much better when we keep our positivity hats on. :0) Something I'm still working to do everyday.

Those little pink flower treats are adorable. Glad it was a hit with the little ones.

Looks like a lot of fun. Love the decorating station idea. I was thinking of doing that for my son's party last year.

So glad you made it through! I can totally relate to the positive attitude thing right now. I am misserable at my job and in order for me to get through the rest of tax season I can't dwell on the crapy-ness of the whole situation. I get so upset and run down that I can't function. So while I am not going to be cherry chipper Katie at the office, I am going to suck it up and make the best of the situation which is what I did Friday. Friday was a lot more doable, too :)
Great job on the party - you made it look effortless :)

we had a wonderful time, thanks for letting the kids and I share in Kenzie's b-day celebration!!

Hey! Lovely pictures you got there!

I knew you'd get it done! :) Looks like the girls had a wonderful time. Some days are easier to face than others...that's why we've got to hang in there on the not so good days.

hahaha peanut usually takes her payment in the forms of "pupcakes" (cupcakes), sprinkles, lollipops, and glitter.

Very cute pictures. Glad you had a better day! I love the idea of decorating rice Krispie treats. Simple. I love their turning it into a pajama party! Building memories! It's great!

The pajama party is hilarious. That definitely beats walking around in Daddy's shoes!

Glad things are on the upswing for you. Nice work with the crunches (I'm working on push-ups - yikes!).