Yesterday was the inaugural Crossroads 17.75K race. And as I mentioned in my earlier post, my day was full of the unexpected. I set my alarm for 4:15 p.m. instead of a.m. I got a call in the wee hours of the morning, letting me know that Dizzle had puked in her bed (SO happy I missed that one). Let's just say, I saw my fair share of drama.
Shortly after the vomit drama calmed down at my house, G and I arrived at the start of the race. (This was a point-to-point event. We parked at the start and were shuttled back MUCH after the race). Upon arrival, we got all of our gear prepped and were about to call MCM Mama, when out of nowhere we heard someone call us out for our rather boisterous outfits. We turned to see MCM Mama coming across the parking lot. 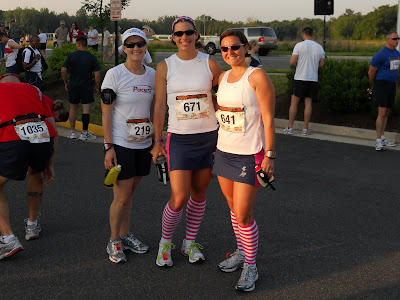 After a few minutes of talking (and G messing with her hair), we headed over to the bathrooms (which had NO LINES!) and waited for the start. Due to the fact that it was forecasted to be 95 degrees with a zillion percent humidity, we had decided to run the race conservatively. It was strictly a fun run. Knowing this, we headed to the start line and moved ourselves to the middle of the pack. Unfortunately, we stood directly next to a speaker which caused us to lose our hearing for the next few minutes. (Seriously, the announcer was SCREAMING into his microphone).
Promptly at 7 a.m., we were off. It was scorching hot right from the beginning. We fell into a comfortable pace (right around 10 minute miles) and headed up a highway toward the State Park where the majority of the race was run. As we turned into the park we were in for a big surprise. We had read that part of the course was on "unpaved roads." I was picturing dirt roads. Maybe with packed gravel. But no. We were running on large unpacked gravel. It was treacherous. Add to that the steep inclines and declines and I was pretty sure I was going to wipe out.
Just after mile two, we came to the first water stop. MCM Mama suggested that we walk the water stops. I have NEVER done this, but figured I'd give it a try. We were all staying together and I wasn't running hard anyway. We did this for the next four water stops (until mile 8) and I have to admit. It didn't suck.
G, MCM Mama and I stuck together (over some monster hills, both in incline and length) until mile 8. At that point, MCM Mama said she needed to slow the pace a little. That's when I picked up the pace (I know, real nice). But, I was feeling really good and she had said to go if we wanted (G stayed). When I left them around mile 8.2, I noted that my overall average pace was at 10:05. I tried to speed up enough to finish with an average of just under 10 minute miles.
At mile 10, I ran past a father and son. The son (who I later found out was 17 with multiple marathons under his belt) yelled, "Dad, I'm gonna go run with her." I told him to come on and we picked up the pace even more (my last mile was 8:13). We chatted for the next half mile or so, until I started to feel the burn. He turned to me and asked if I kicked too soon. I said, "Yup." But I really wanted to say, "No, I am just running my fastest mile of the race. And you are 17 and I am 28 and have had three kids."
I told him to feel free to kick it to the finish. And he did. I tried to follow, but he crossed eight seconds ahead of me. When I finished, I looked at my watch and it read 1:48:03. Overall pace of 9:45. Much better than the 10:00 pace I was trying to get to. I killed those last three miles! 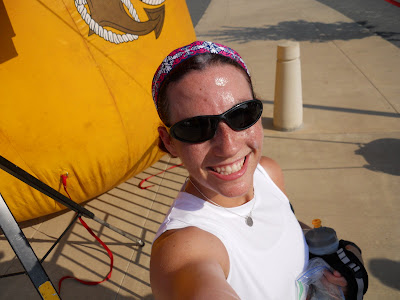 After I grabbed some water, I headed back to the finish line to cheer for G and MCM Mama. Here they are in the last hundredths of the race ... 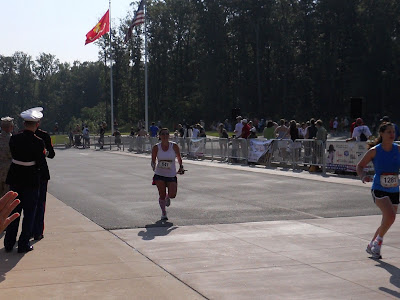 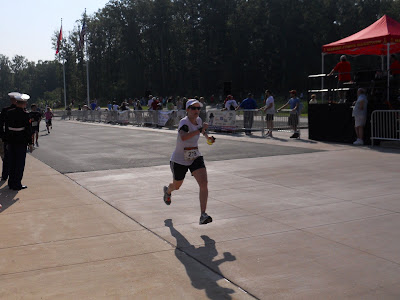 After the race, we had to wait for an hour for a shuttle back to the start. This is us waiting ... Since it took so long to get back to our cars, MCM Mama needed to leave before lunch. I wish she could have stayed, but G and I put our hooks in her and are trying to get her to come to Richmond to race. And I am positive that we will go back there to race again.
Posted by TMB @ RACING WITH BABES at 9:31 AM

Congrats on another awesome finish and for a those great last few miles. Awesome job and it sounds like you all had fun together.

As always, you rock. Terrific job.

That sounds awesome! What a great story!

An hour wait for a bus? Wrong and retarded!

Heat is no fun! I hope it's not too hot next Sat. in your area when I race in MD! Love the matching outfits!

LOVE the outfits - and sounds like you had a great race despite the heat!

Good job! Looks like a hot weekend for everyone. Running on unpacked gravel is the worst! Even being an avid trail runner I have a hard time dealing with gravel like that.

Ok, you ladies sound like so much fun to run with! Sounds like an awesome race, great kick at the end! Way to run with like an 18 yr old boy, lol : )

that's awesome!! you have amazing KILLER time! i know how hot it was there. i was in prince william co. the week before last and part of last week and it was hotter than ever. that course sounds much more challenging by your accounts then they wrote up in the description. i was going to run it too but we had to switch our weeks of coming up to VA. WAY TO GO! cute little medal you got too!

Nice focus for a strong finish. Now, how did the organizers come up with the distance - or do you know?

Way to negative split--like they said in the RRCA class, the most enjoyable way to race! Glad you got to meet up with MCM; I hope to one of these days.

You are awesome ;) Cute pictures!

It was so much fun to meet you guys and run with you! I definitely want to do it again!

Just found your blog. Loving it ... and those cute socks! Looking forward to reading more.

How cool that you got to run with MCM (and G, although that's not new :))

Great race! Way to kick it the last couple miles! :)

You are CRAZY, CRAZY AWESOME! Way to go. ALways pushing it to new levels. Hope Dizzle is feeling better.

The life of a mom is never boring!

Congrats on pulling it all off and finishing a strong race! Sounds like the course was a challenging one.

yeahhh!!! You girls are brave in that heat!! It was hot this weekend! I totally wish I would have remembered to come spectate! Glad it went well!

Wow, way to pick it up BIG TIME! You look strong in your finish pic. Sounds like a fun race overall - congrats all around!

Boy, you dodged a bullet with the puke incident! You pretty much saw all body fluids come out fo your kids this week - nice!

So cool you all stuck together! And NICE job on finishing strong in that horrid weather! You are doing great! Too bad the buses ruined your lunch date - but I'm sure you've all got many more in the works :)
Great job lady!

How fun you ran with bloggy peeps and what a nice strong finish!

WOW! You did awesome for that heat! Holy moly! And a 17 year old who has run multiple marathons? I am double-impressed!

Boo on the unpacked gravel! What were they thinking?

Wish I had known you girls were running!! I was down there covering the race for www.runwashington.com and was there ALL day :)

Good job! Way to give it everything at the end, I usually slow WAY down until the last tenth of a mile. Congrats!

Is it sad that I had to use a km to mile converter to figure out the distance?? Haha.

I know this is a little late (a week without Internet will do that), but I wanted to tell you congrats on a great race. Sounds like it was fun!

I would like to exchange links with your site racingwithbabes.blogspot.com
Is this possible?