what happened to relaxing?

Back a zillion years ago, when J and I didn't have children, we used to spend the weekends relaxing. I distinctly remember Sundays where we never got out of our pajamas. Eight years and three kids later, well, that doesn't really happen anymore. Instead, our weekends are spent rushing from one activity to the next. And this weekend was no exception.
I, being the thoughtful and loving wife that I am, made sure that my long run was completed on Saturday, letting J sleep in on Father's Day. So, at 5:51 a.m., I arrived at G's for a 10 miler with a group of runners who are much faster than we are. It was a great run (GI issues aside) with some great company. I'm really looking forward to the next few months of training with them.
After the run (and my attempt to rectify my GI issues), I headed home to get Dizzle and Doodle ready for their dress rehearsal for ballet. Aren't they cute? 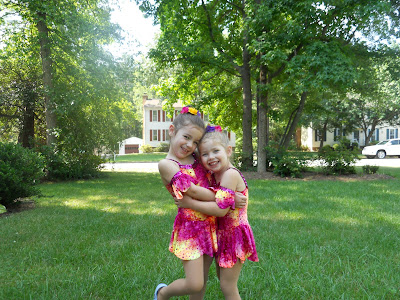 In between dance numbers, I got a call from Shelly, who was in town racing the XTERRA 21K. 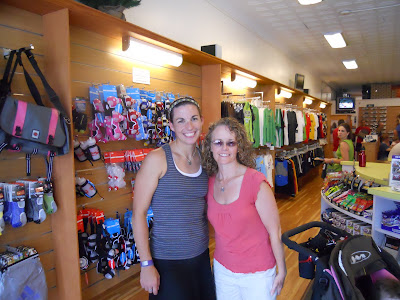 I called her back when we got home from rehearsal and made plans to meet for lunch. So, J, the girls and I met up with Shelly and her crew at Baker's Crust followed by a visit to a local running store. We had a great time. Shelly and her family were super nice. Our kids got along. 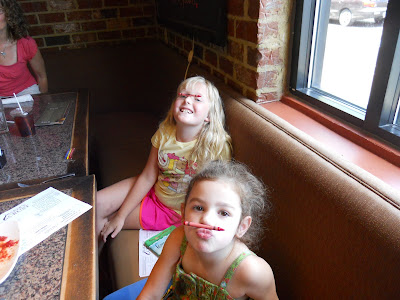 It was pretty much the perfect meet up (and I am really hoping we can get everyone together again).
After lunch, we rushed home and got ready for the recital. The girls were adorable and hysterical. Dizzle could not have been more expressive up on stage and Doodle, well, Doodle is a character. Instead of dancing next to her prop (a rubber duck), she proceeded to stomp on it. Needless to say, I was laughing the entire time. I cannot wait until next year.
Then on Sunday, J slept in and the girls and I made him breakfast in bed. J got up and headed out for his long run (he's training for the Richmond Half Marathon) and I played games with the girls and my sister, Angie Pants, who surprised us with a visit. In the afternoon, we attended Dizzle's BFF's 5th birthday party at a minor league baseball game. It was such a great party and Dizzle and Doodle were having a blast, but Dilly was in TOTAL MELTDOWN MODE. It was in the upper 90's and she did not want to be held by us. At one point, she choked on her drink and spit it on the back of the person in front of us and then a few minutes later, she kicked that same person in the shoulder. It was time to leave. We had made it through the party (the hour and a half before the game) and one inning. Dizzle was able to stay with another family, but the rest of us headed home. I don't think we will be headed back to another game anytime soon. Well, maybe J and I will, but only if someone is volunteering to babysit. Wait. You know, if you're volunteering to babysit, I'm not going to a baseball game. I'm going to go somewhere and sleep. Like, I did before I had kids and weekends were relaxing. I'm just saying.
Posted by TMB @ RACING WITH BABES at 7:39 AM

It's so sad and it's so true. Weekends are more exhausting than weeks half the time. And just for the record ... we routinely go to sleep early on date nights. Not 8 PM or anything, but never after 10. Usually we're planning a long run in the AM.

they are too cute!

I know exactly how you feel! Maybe we'll get some sleep when the kiddos are 20? LOL The girls look adorable in their dance outfits.

I've thought about getting a sitter just to take a nap before. I really miss those pre-kid naps, I didn't appreciate them half as much as I should've.

I saw your spotlight on Run Like a Mother... very nice! =)

I did your fridge challenge over on my blog :)
http://thesclub.blogspot.com/2010/06/food-for-thought.html

I have to say, I'm sans kids and yet my weekends are always busy! I might have to take a page out of your book and spend a Saturday doing nothing! LOL!
So jealous you and Shelly got to hang out! Looks like a blast!

Isn't it insane how crazy scheduled we all are with our kids?!?
G wanted to quit karate a few weeks ago and we did. Now that t-ball is over and karate is over, I feel like a free woman! I am loving how relaxed I feel.
Hopefully, we'll be like that until after Christmas when basketball begins!

Your girls are so dang cute!!!

I feel you! My five year old asked me recently "what did you do before you had kids?" It was kind of depressing to think back on that time. Your baseball game experience sounds a lot like ours!

What a great weekend! It's always fun squeezing it all it.

I love the picture of the girls. They really are adorable!
our weekend was made even more fun meeting up with you, J and the girls. I can't wait to do it again!

have a great week. Oh and sleep, when you figure out how to get some of that let me know!

I say we neglect our kids and do not put them in any events... LOL!

I want my weekends back!

Just wait until they are involved in three different things... Today's "craziness" will seem calm then. ;o)

Busy weekend! The girls look so adorable in their ballet outfits!! :)

And that's awesome you met Shelly!

I have to say I laughed at Dilly's exploits although I'm sure you weren't. I've had days where the heat makes me want to spit water on someone and kick them. Very cute opening picture!!

Awesome that you got to meet Shelly (and vice versa).

It's funny how sleeping in can be such a gift these days! Sounds like a busy, fun and entertaining weekend.

the girls look so cute in their outfits! I love balelt reitals for that age, too cute!

Since when did our "long runs" become our 'down time'? Oye...being mommies...

Oh I remember it well...then when the kids are all grown up and you are alone again with J...you won't be able to sleep in anymore :)

My kids were unusually hyper this weekend- I'm exhausted!