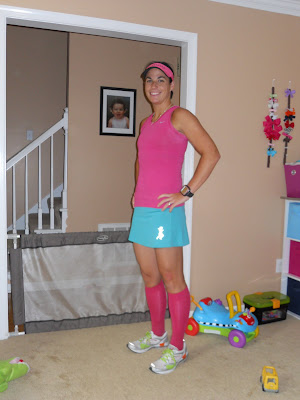 As I mentioned yesterday, last night was the Moonlight 4 Miler, a local road runners race with ice cream in lieu of race tees. I was really excited to run this race. To begin with, I love ice cream. And second, it was my first four miler - an instant PR.


The weather wasn't really cooperating yesterday. We were hit with a series of thunderstorms in the hour before race time. I was convinced that I was going to get there to find out that it was canceled. I arrived at the start just before 7 p.m. and caught up with Mrs. D in the parking lot. We snapped this quick picture (I didn't want to carry my camera in the rain) and headed over to pick up our race numbers. 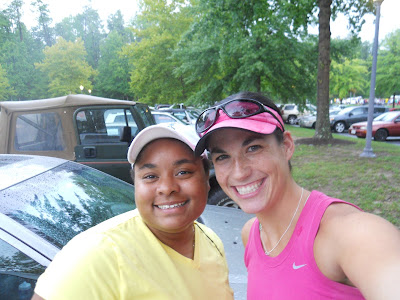 Immediately after getting my bib, the skies opened and the race director commanded everyone back to their cars to wait out the storm. Here we are waiting in the car (Mrs. D, Earth Momma Mer and Me). 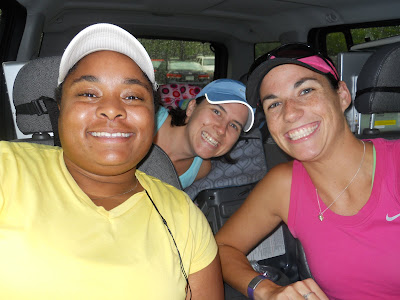 Just before 7:30 (the original start time), we headed back to the start area. Shortly after the 1/2 mile kid's race concluded, we were toeing the line. And it was steamy. Just standing there my sunglasses were steaming up.


Once the race started, we headed through the parking lot out to West Creek Parkway and did a series of two out and backs. The entire four miles was rolling hills with almost no flat sections. I started out faster than I had intended (Garmin clocked a 6:20 at one point) but I was feeling good. I decided that I was going to run hard, but comfortably and not look at my watch. All I wanted to do was run strong. And I did just that. With the exception of one woman, with whom I played a cat and mouse game the whole race, not a single person passed me after the first half mile.


As I was finishing, I knew I was in good position. Due to the layout of the course, I could see the leaders headed towards the finish and I knew there weren't very many women ahead of me. And from what I could tell, there weren't any other Athenas (yes, I weigh 151 and race Athena) ahead of me. So, I kicked it into high gear and crossed the line in 32:13.


I was super pumped. I was really hoping to break 35 minutes, based on the course and humidity, but I killed it. It was awesome. Then, after cooling down, stretching out my seized calves and eating some ice cream, I ran Mrs. D in (she did awesome in her first four miler).


At the conclusion of the race, there were a bunch of random prizes ranging from candy bars to a Garmin. I walked away with a new running cap. And the best prize ever - a FIRST PLACE finish in the Athena division (I was also 3rd in my age group and 15th woman overall). This is my sweet hardware. 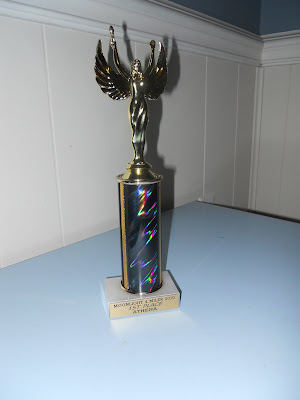 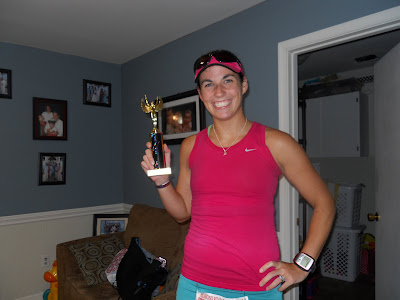 Congratulations on the win and the cool trophy! You looked adorable, as always. I really like that you didn't look at your watch and just flew. I need to try that. i'm typically checking the time every minute or so. not that it makes me go faster!! CONGRATS!!

Woooooohoooooo! Awesome! You, girl, are one fast momma! :) And you looked cute! :)

So, enjoy your victory. :) You deserved it!

The photos are so awesome!

Especially the toys one! ;)

AWESOME!! Wow, what a great finish, and you are correct, outfit is totally adorable. Love it!!

Ice cream AND trophies???? Awesome! You are speedy!

Ice cream AND trophies???? Awesome! You are speedy!

Great finish and congrats on your trophy! Loved the outfit!

Whoo hoo! That is some awesome bling!!!! And a great time for such crappy conditions! I think you should put it through a neclace and wear it all day like Flava Flav and his big gian clock! Hahahaha!
Congrats!

You are incredible! Congratulations. Nice trophy too!

What a great way to spend your Thursday evening! Congrats on the win and the great race.

Yeah for all the wins! I love the trophy and you did kill that 4 miler! And all of this in horrid heat and humidity!

Congrats on the win, love teh outfit.

That is awesome!! Congrats on the win and WOW on your finish time!

That's so cool that you won a trophy! Awesome racing time. And even more awesome of an outfit! Love the pink.

Awesome win! Love the trophy! Is that one of the new ultraswift skirts? looking good!

First of all - outfit is TOTALLY cute! Love the socks! Congrats on the trophy! That must have felt great!

"Outfit: totally cute." LOVE IT. And fact. You look adorable.

Congrats on the win and crushing your goal time!!

Very cool! Congrats on the trophy! How was the ice cream afterwards?

COngrats that is awesome!!

Woohoo! Congrats on your race! You did awesome! :)

Congrats on the Athena win, must have been the awesome outfit that made it possible! ;)

Congratulations on the new hardware - how cool that you got first! And you're right, that time is FLYIN'!

Amazing work! I'd only be able to get in 3 miles in that time!

And I am pretty sure I broke out into humid sweat just reading this. Can someone get me a fan? Please?

Congrats on the race! Running in humidity is never easy, and you killed it for sure!!

Great job! Sweet trophy! I'd be all about ice cream instead of a shirt... yummy!

That's awesome! You ROCKED it :)

Nice work!! Love love love the outfit girly. Way to rock it out.

I see a cute new running skirt! Always a good way to start a race! You must tell how many you bought at the expo so I can be even more jealous and tell my hubby that to win a trophy and need more too. Good job! =)

You are amazing...what a great race! Super cute too :)

Very cool - running for ice cream is almost as cool as running for beer! LOL! Congrats on your first place win!