On Thursday, SpeeDee (a.k.a. RunHapi13) mentioned me in her post. She said something about me being an a** kicker and that I would rock the triathlon and take home some hardware. I laughed in response. Because, seriously, you are crazy if you think that doing no bike or swim training for 2+ years is going to help you walk away with an award. That doesn't happen.
Well, until it happens.
Yeah, that's right. Despite, my utter lack of training and failure to assemble my bike until Saturday, I finished 3rd in the Athena division with a finishing time of 1:23:43. (I know. Pick your jaw up off the floor.)
So, here's how it went down.
G and I arrived at the race at the way too early hour of 5:30. We set up our transitions. 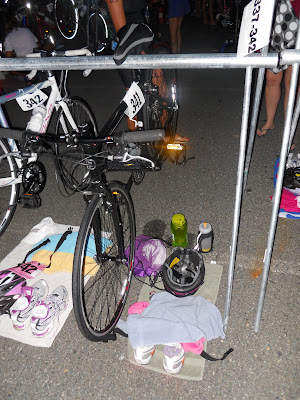 Took this super cute picture of us in our swim caps (how much do you love the pink?) And proceeded to wait. And wait. It was a pool swim with a time trial start, so being #341, I had a while to hang around. In fact, I saw G enter and exit the pool before I even got in line.
The Swim (11:12): The swim was the leg of the race that I was most apprehensive about. It was longer than I had ever swam before (400 m) and I can't exactly swim freestyle. So, I (and my less than stellar breaststroke) headed into the pool a little worried. I started out as strong as could be expected and I had managed to catch up to the woman in front of me by the end of the lane. She let me pass and that was pretty much the last time I saw open water. From then on, a group of five of us proceeded to swim on top of each other. No one was fast enough to make a true pass and no one was slow enough to drop off. It was crazy annoying. And at the end of each lap, we would all get bottlenecked waiting to push off the wall. Eventually (it felt much longer than it actually was), I climbed out of the pool and headed to T1.
T1 (2:02): After some barefoot running from the pool to the transition area, I quickly ate a GU, dried my feet, threw on my socks, shoes, helmet, sunglasses and most importantly, running skirt. I unracked my bike and ran as fast as my tired legs could take me to the bike course.
The Bike (42:39): I knew heading into the bike that the course was rather hilly, which was actually an understatement. Compared to the other triathlons I have done, this course was freaking Mt. Everest. I swear there were times that I passed people who WERE NOT MOVING. Early in the bike, I messed with my gears during a climb. That was a big mistake. Apparently, in the two years since last riding my bike, I had forgotten how to change gears properly. TOTAL FAIL. Eventually, I got the gears to a comfortable position and didn't touch them again (this probably wasted a lot of unnecessary energy).
T2 (0:43): Once I dismounted my bike, I attempted to sprint (if you want to call it that) to rerack and head out on the run. I grabbed my handheld and was off.
The Run (27:09): Like the bike, the run was all about the climb. After the first half mile or so, the remainder of the course was pretty much uphill. I went Garmin-free and have no idea of what my splits were but I can guarantee that my first mile was considerably faster than my last. Despite being completely spent at the end, I did my best to kick it to the finish. And fortunately for me, I had a great race photographer who caught this shot of me with about a tenth to go (could my quad look more fierce?) 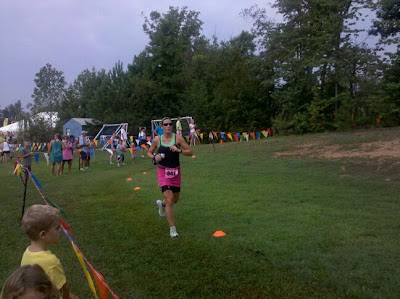 After the race, G met me at the finish line and we snapped this picture. 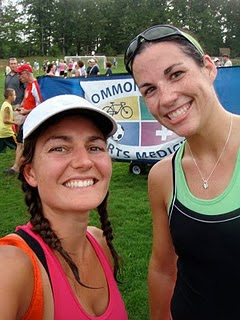 Overall, the race was fun. Lots of painful fun. And the whole time I kept thinking, "How does anyone race anything longer than a Sprint?" (I cannot express the amount of respect I have for Triathletes.) And even though, I have proved that you don't really need to train to finish a Sprint distance, I am not eager to try it again any time soon.
But in the end, I was really happy with my finishing time, especially considering I was just hoping to break 1:30. And, I'm not going to lie, it was totally awesome to place (here I am with my award - a sweet beach towel) 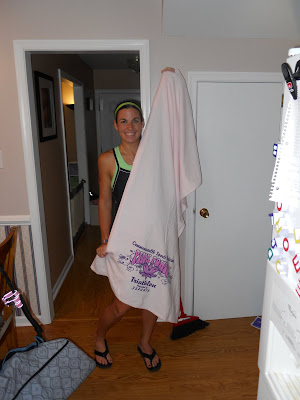 But, I would kind of like to know what I could do if I actually trained ...
Posted by TMB @ RACING WITH BABES at 6:36 AM

I saw that quad on FB and thought - SUPERSTAR!

Great job... and great race report... perhaps you could add Tri coaching to you repertoire.

Yeah, yeah you kicked butt, looked awesome and won a prize, goes to show how fit you are, massive pat on the back.

You are awesome...I can't imagine tackling that without training for the swim and bike portion...great job!

Wow. Amazing....YOU are AMAZING!! To finish so strong and to place when you had not trained for the bike or swim is just really incredible. Reading your post was great. I've always had a tremendous amount of respect for triathletes and this just brings it to a whole new level for me. Great job, Tonia! YOU ROCK!!! (ps - your quad does look pretty much killer in that photo!)

Why a I not surprised that you kicked A :) Superstar! Great pic of that toned quad too!

Great recap! I'm always amazed @ your abilit. You are simply an athlete!! How great that even with little tri training you amazed yourself. What a great weekend are you. Congrats!

I did my first tri back in July and absolutely loved it! Glad you had so much fun. :)

Congrats! I'd love to do a tri but unfortunately I'm scared of open water and fast bike riding.

Daaaaang!!
That is all.

Sweet! Seriously jealous that you got to swim in a pool! You did amazing, how cool to not train and place! You are a rockin' athlete! Come to Minnesota next summer and do ours with us!

Okay, seriously?!?! Way to go!! Sounds like you lost some time with the crowding in the poo, too. BIG CONGRATS!

Awesome (espeically for no real training)! What a cute towel.

Great job on your finish! I loved reading your recap. I even laughed a bit to myself when you described not riding for two years and then trying to change gears. :) Cute.

Dang, girl! You rock! So, when you finish the ultra this winter, are you going to actually train for a tri? ;o)

You continue to amaze me! Wow, Congrats on placing too. I love all your pink. Tri's are fun, but they are exhausting. Those ironman folks are crazy amazing.

i just did my second tri this past Saturday, it was a HUGE international event and then on Sunday I volunteered for the Ironman 70.3 event and got to see all the pros up close and personal. it was unreal.

i am a runner turned triathlete and I am thrilled about it all!

I'm so in awe of you! Not only that you won your AG but that you finished strong! And with a smile on your face! You make me want to try one now, too! I'm curious to see what you could do if you trained, too....congrats!

Way to go! Your abilities continue to impress!

Congrats!! my Tri friends keep trying to suck me in....I have to resist unless they create another day in the week.

Sooo impressive buddy. I need to get into some events with "Athena" divisions...

That is friggin' sweet!

Awesome! (Pretty sure you are super-human!)

I am glad to know that there is someone else out there who isn't a great freestyler! I feel like I am gonna look a fool during the swim doing my "modified" breastroke/freestyle combo!

Is there anything you are not good at?!
Seriously?!
What don't you do?

wow congrats! that is pretty amazing :)

Congrats on the finish- great job :)!

Stumbled upon your blog so congrats on a great race!! If you're interested getting some training for your next tri, we'd love to see you at our Pink Power celebration tonight!! 8pm at the Midlo Y! We're offering a super deal of $95 for training for the rest of the season -- which will include the Richmond Sprint in October! Just think of the 10-10-10 shirt you'll get!! Even if you don't make it, hope to see you out on the race course! Keep on inspiring other women with your blog and great racing!!

How awesome are you? Seriously! That's so great. Congrats. You got me thinking...maybe I could tri! Have to at least practice my kick turns... :) Way to go!

wow girl way to go...you placed and didn't really train, you are my idol!!

Very impressive! Nice job on the 3rd place! You are a rockstar :)

Right on! I had a strangely similar experience in June w/ a sprint tri that I hadn't prepared for very well and wondered if training is over rated? I know it's not but...

Here is my similar story:
http://averagewomanrunner.blogspot.com/2010/06/lake-padden-triathlon-recap.html

Um...can we say that you're awesome! Congratulations!!!

Love doing TRI's! Great job on yours, is there another on your schedule?

That is really awesome you went in and won without much training! I wish I could make that work!!! Congrats!

Yay! Awesome job in your tri! That's great that you got 3rd...woohoo!

Check it out!! Freakin awesome!!! Way to go, beach towel winner!! I love it.

Congrats! You're such a rockstar!