As you know, I decided to go with option C for my race on Sunday. I ran all of my weekly mileage and was going to pray for a PR. The PR didn't happen (more on that in a minute), but Chicago was a blast, the race was hot and bloggy meetups were happening left and right.
I landed in Chicago at 8 a.m. and navigated my way around O'Hare until I found Katye's gate. (not easy since I forgot to ask what airline she was on.) After an hour or so, her flight landed and the two of us attempted to make our way out of the airport. We had been calling Courtney (who picked us up) while we tried to find her car. It was a total mess and after 30 minutes of wandering, we finally found Courtney less than 50 feet from where we originally started looking for her. Go figure.
Once we were settled, Courtney gave us a driving tour of Chicago and we headed to the expo. 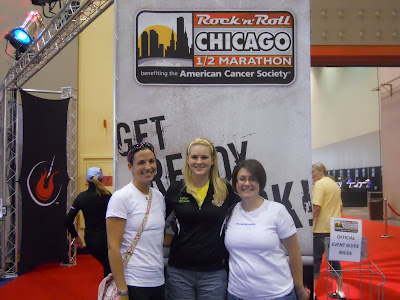 And it was fantastic. A little slice of running heaven. Once we picked up our bibs, we headed over to hear the end of Kara Goucher's talk. At the conclusion, Kara signed autographs and took pictures with fans and thanks to Katye (who has a mean hip check), we were the first in line. So very cool. 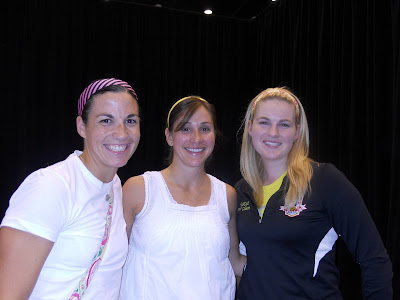 After meeting Kara, we headed over to the Running Skirts booth, where we proceeded to scavenger through their entire stock. I'm actually pretty certain that we scared the staff. It was hilarious. While we were attempting to take over the Running Skirts empire, Bobbi came up and introduced herself (RNR was her first half). 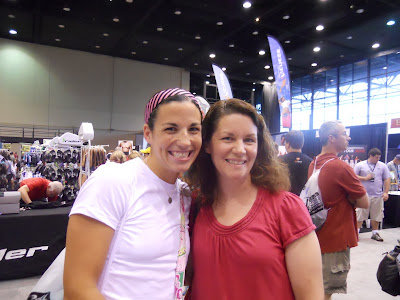 We all stuck together and explored the rest of the expo before heading out to lunch at Flat Top Grill. 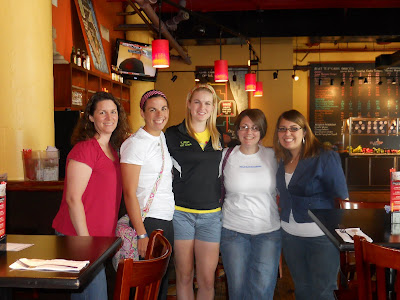 The food was fantastic and our server was awesome. 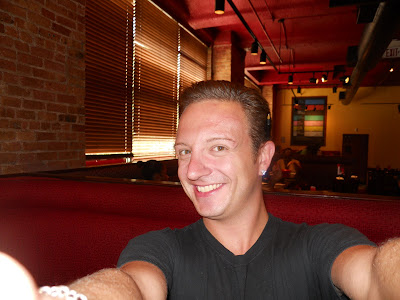 As we left he shared these well wishes with us, "Good luck in the race. Don't sprain anything."
After lunch, Courtney dropped Katye and me off at the hotel. It was around 4 p.m. and I was 100% ready to go to bed. In fact, Katye and I made a quick trip to the 7-11 across the street, came back and were fast asleep by 7 p.m. Yes, we are that boring.
We woke up at 5 a.m. for the race. I was feeling good. Still a little tired and slightly dehydrated from the day before. We got ready for the race (which included writing my goal paces on my arm) and walked to the start. 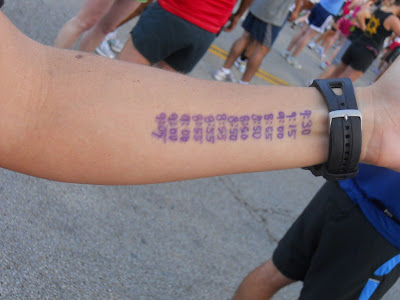 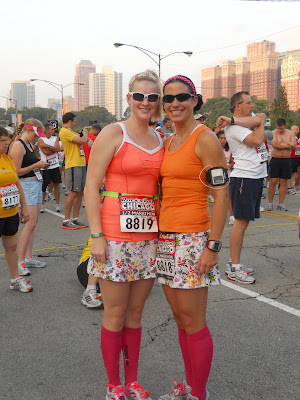 There was so much going on, but once we got into our corral we managed to meet up with Courtney. 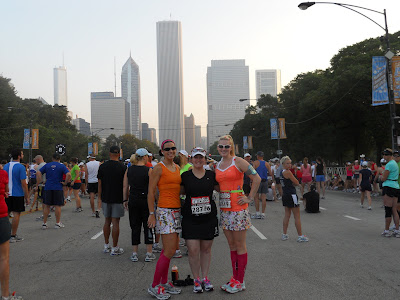 And before we knew it we were off. The race started with a slight uphill that lead to tunnel. The most stifling and hot tunnel, might I add. And that's where my Garmin freaked. I lost the signal for the first of many times on the course and when it came back the pace was all crazy. Apparently, I was running a 5:53 mile. Not so much.
I hit my first two miles exactly where I was supposed to be, but when the time to speed up came, I just couldn't do it. I was hot and thirsty (I stopped and refilled my handheld (22 oz) four times during the race). And once I hit mile 7 and heard the winner's time being announced, I knew a PR wasn't in the cards. So, I changed my race strategy and switched to option B. I slowed my pace and started to use the race as a training run. It wasn't worth killing myself to not PR. And it was good that I made that choice because by mile 8, I was hit with the runners trots. Four bathroom breaks in the last 5 miles. Not fun.
I finished the race in 2:11:05, exactly a 10:00 pace. After grabbing as much water and Popsicles as I could, Katye and I headed over to meet up with Jamie and Jodi (who introduced herself during mile 3 of the race). 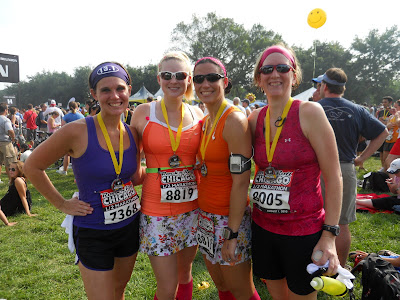 Afterwards, Katye and I headed back to the hotel, ate a fabulous brunch (chocolate and marscarpone stuffed french toast) and relaxed before heading to the airport. The weekend was a blast. An extremely exhausting blast.
Posted by TMB @ RACING WITH BABES at 7:56 AM

Good job, sorry it wasn't a PR but you guys looked adorable and that's what really matters, right? :)

Even if you didn't PR, you still did great and it sounds like you had a wonderful time!

Looks like a great time! Sounds like you were smart to switch modes mid-run! Congrats on a great job! LOVE your outfit!

ok just noticed the big smile face balloon in the background of the last picture...sooo funny its like a giant sun glaring/beating/brutalizing down on us

awesome outfits! the race sounds like it was rough...but wow, i want some of those stuffed french toast. yummm-y!

Great recap, Tonia! So nice to finally meet you. Keep up the great work. You're having a phenomenal year!!

So jealous you got to meet Kara! What a cool highlight of the weekend!
Way to finish strong and enjoy the race - that is always important. I feel your pain - bathroom stops and the heat are the baine of my existance right now! Glad you had fun!!

I love your race outfits! That skirt is so cute and I love the orange top! Awesome that you got to meet Kara! She looks so cute! Congrats on the race!

Sounds like a blast! Sorry a PR wasn't in the cards....but you look GREAT! super cute outfit

It was so great to meet you! I am glad I asked if you and Katye were who I thought you were at mile 3! Those pink socks were my first clue and then the fact that you matched pretty much clued me in! Good job out there!!

My Garmin freaked out in the tunnel too, and when we went under McCormick place. Don't know if a foot pod would have helped. good strategy on the pacing.

You look adorable as always and way to go on the race! Using a race as a training run is my favorite and how fun to have so much company!

WTG on getting it done. Great pics.

I love the smiley face balloon in your final photo.

I wish you could have had that PR. We all know that on any given day we could have the race go our way or not. I think you did great being able to adjust your plan and get the most out of your experince. Fast or not so fast every run helps us to improve.

It goes without saying, you both looked wonderful!

love the recap, love the outfits. hope to meet up with all of you at a race one day! :]

love all the photos and recap! You did great considering everything going on with you and the weather on Sunday! Congrats on the 1/2!

I had so much fun meeting you - and so much fun at the race too! I am sorry about your GI troubles, but you still rocked a great race!

YOU LOOK AMAZING!! I love that outfit, beyond adorable!!!

Looks like you had a fabulous time! The outfits were awesome!

Great job! As much as I know you wanted that PR, it is nice to hear of some of the "top" runners who don't always hit a PR. Makes me feel better when I don't do as good as I can.
Thanks for keepin it real!

From one skirt addict to another, I would love to see all the running skirts you picked up at the expo! How about a post on that? Great job in Chicago!

Ok, Jealous! Jealous of meeting Kara, your cute outfit, all the bloggy meetups, your time! See, doesn't that make you feel better! Great job, glad you had fun.

Sorry to hear it wasn't your best race, but I have to say you looked great. I love your outfit!! :) Glad you at least had fun.

Sounds like you did the right thing in the race. No sense in risking injury or worse for a PR. Way to go though, because it's still faster than I think I would ever be able to go for that long.

so fun to get to meet up with everyone!

despite 4 bathroom breaks, you still managed a 10:00/mile avg? either you were running like the wind before the trots hit, or those were the fastest pit stops ever!

I have been craving French toast and yours sounds awesome! Too bad about the bathroom problems but with all of that you did just fine! You two looked great and it is amazing how many bloggy meetups you had.

Awesome photos. Seriously your outfits are amazing and your smile is to die for. Must do Chicago one day. LOVE that city!! [in the summer] ;)

Love you pics and post. I love that you ran smart and regrouped. Ever figure out what was up with your Garmin?

I'd take that type of training run any day. :) Congrats on the finish and what sounds like a really fun day!

UGH just missed comment 33. Soooooo this means that I get to pace you for a sub 2 hour next month?? Right?? Hmmm, I wonder if the course will work for a PR. Hugs to making it through a rough hot and trotty run. you look so stinkin CUTE and I am jealous taht you met Kara

Congratulations on the race! LOVE your orange shirt (and outfit overall). I spent quite a long time last week (after seeing your outfit) looking for an orange tank top, but it wasn't the color de jour and had no luck. :(

You looked as good at the end as you did at the beginning. Such cute outfits!

great job! Oh, those last 5 miles must have been awful. That is my worst nightmare! Congrats.

Nice re-cap! I love living vicariously through your race experience (except the trots part) :)
So jealous you got to meet Kara!

Great pics and fun recap! Glad you managed to have a good time :)

What a fun adventure! Too bad it didn't turn out to be a PR day, but you made the smart choice. No sense killing yourself and sabotaging your training THIS week. Outfits looked great, BTW!

Great pics, great recap well done, sorry you had a hard time of it, runners trots are never nice,but you done it in a great time. Well done.

Given the stomach troubles and all that's pretty dang impressive! Great job!

Sorry you didn't hit your PR, but it looks like you had fun in my hometown!

oh my goodness! I seriously should have been there! Tonia, Jamie and Courtney all in one place?! 3 of my fave bloggers. Ive been slacking big time and need to catch up on blogs!

Fun photos! It looks like you all had a wonderful time. I'm sorry that it wasn't a PR day, but it sounds like it ended up being a great training run. As always, cute outfit!

I am from Chicago (now in San Diego) and I remember that server at Flat Top Grill!! How funny is that??

Glad you enjoyed my home-city!
:)