The Company: I was joined by G (who thought this FREEZING COLD race would be a good idea), KC, 3L, D, J and Katye. Having a bunch of my posse at the start (and finish) almost made the temperatures tolerable. And of course we were the best dressed on the course. Here's a shot of me, G, Katye and KC before the start. 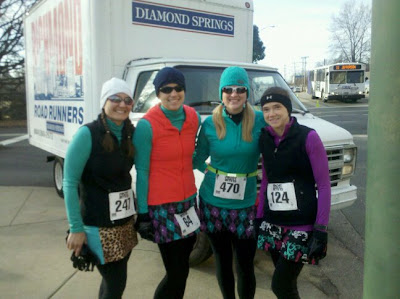 The Course: I had not run this race before and had been warned of hills on the course. Richmond Road Runners described the course like this, "The course is out and back beginning and ending next to the Cary Street soccer field. The course goes out Harrison to Colorado, through the neighborhood next to Maymont and into Byrd Park. Much of the course is flat, but there are a few testy hills."

Past experience has shown that if RRRC mentions hills in the course, they are probably worse than you think. Due to this, I was planning for much worse. There were rolling hills during the first two and last two miles of the course, but for every climb there was an awesome downhill which I tried to use to my advantage.

The Pace: My goal for this race (since I had never run a 15K before) was to use it as a half marathon goal pace run. That meant 9.3 miles at an 8:20 pace. It seemed doable, but I questioned whether or not I would crash at the end (as I historically do).

Anyway, 3L, KC and D were all looking to hold a similar pace. We decided to go together and once we navigated the crowds at the start, we fell into a comfortable groove. Through mile 2 we were averaging 8:10s. Around mile 3, 3L pulled ahead. I tried to keep up. It worked and at mile 4, I passed her. That's when I decided to "just run." No watch checking. No obsessing about the pace. I just wanted to run whatever felt comfortable enough to carry to the end, but hard enough that I knew I was pushing it. We looped back around mile 4.7 and I could see that most of the posse was right behind me. It was a total boost to see them. From then on, I just locked in and pushed to the finish. I felt strong until mile 8 (which was slightly uphill and directly into the wind). When I finished, the Garmin said I had an average pace of 8:05. Just the confidence boost I was looking for heading into my Spring marathon and half marathons.

The Post-Race Refreshments: After finishing, we headed to a parking deck (classy, I know) where we were given Diet Coke (my favorite post-run drink), bananas, bagels and oreos. Now, if they had only served Dunkin Donuts coffee, it would have been perfect.

The Temperature: Did I mention that this race is called the Frostbite 15k and that it lives up to it's name? Enough said.

Next race on the schedule: Disney Princess Half Marathon AND a sub 1:55 finish ...
Posted by TMB @ RACING WITH BABES at 8:05 AM

As a reader of your blog for years...before baby 3 was born...It is awesome to see how speedy you have become. You have always been such a strong runner and now you are so close to having a sub 8 min/mile pace for longer races...so awesome! Way to go!

You are rocking it, girl! I'd be willing to be decent money that within two years you'll be Boston bound...

great job Tonia!! you were probably home by the time I finished. HA!

You always look so cute when you race. And the fact that you are FAST makes me even happier! :) Great race!

I love your skirt. Super cute!

Great job! You smashed your goal pace, you'll get your half-marathon goal easily!

that's so awesome! good work on such a challenging course!

That is an AWESOME time!! Hoping to channel some of your speed as I gear up for the NYC Half. :)

I'll be at the Disney Princess Half as well! I think a bloggy meet up may be in order :)

I didn't know you were running Disney Princess!!! I'll see you there!

Great finish, as always. You're getting super fast, and I have no doubt that you will rock out a sub 1:55 half! You girls look absolutely adorable in your gear, as always.

NICE! Congrats on the great finish!

Awesome time! You will totally rock the Disney Princess Half! Can't wait to see the outfit for that one! You always have the cutest skirts!

I live out in Waynesboro and went out for a run at 9 yesterday morning...it was definitely FRIGID!!

Speedy!!! And you gals looked super cute in your coordinating skirts.

great job! so jealous that you get to do the Princess Half....so fun!

Great race!! Congrats!! I love reading race reviews from close by races. I will add this to my list for next year! :)

you totally killed that course! and you are being modest...it was a challenging run! very exited for you and can't wait till you rock it out at Princess! Wouldn't be surprised if you placed in you Age Group ; )

Pretend this is real said...

Way to go! And LOVE the skirts!

Great job! Love the pace. You rocked it! ANd the Disney Princess Half? Jealous!

You are getting so fast! I am hoping to have that pace at the princess too:)

that is soo AWESOME!! YAY for you!! Great job!

You can get frostbite in those balmy temps????

I ran in the hellish cold on the weekend, but I can't imagine trying to run fast or racing in that. *shudder* You're a trooper... a stylish and speedy trooper! Congrats on a stellar time and perfectly paced race! Definite confidence-booster!!!

hey i know her! i met kayte training for disney princess, you guys are going to have so much fun! good luck!

see you at disney!!
TTR

Great race! You'll ROCK Disney. I'm sure of it.