1. Doodle has a serious temper issue and a defensive nature. She is quick to overreact and it doesn't take much to set her off, which often leads to ear-piercing screams. It's rough. For example, when she loses a game, she usually throws the game pieces/board/etc. Just this past weekend, she threw the Yahtzee dice and yelled, "I hate this game." (yeah, she's a little competitive. Wonder where she picked that up ...) And it takes a lot to get her to cool off. In fact, when I tell her she needs to calm down, she usually YELLS back at me, "I AM CALM!"

Obviously, she is not. The kicker of the situation is that she looks like a cherub. Completely innocent and angelic. 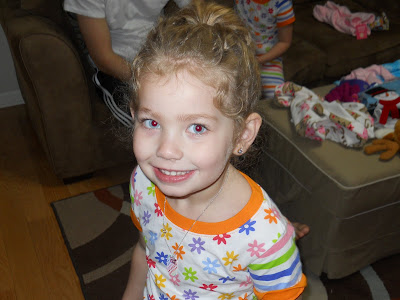 See? She is the epitome of a devil in disguise.

2. Even though Doodle is quite photogenic, she has recently started making a "pirate" face whenever she sees a camera. 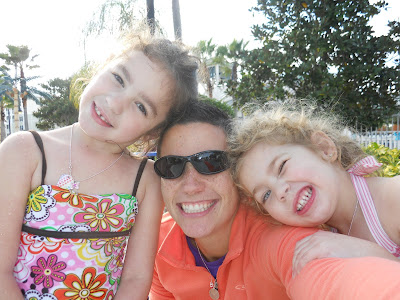 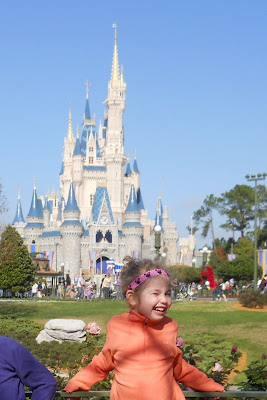 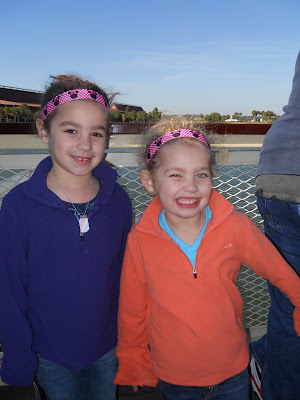 In theory, I don't mind this. And I am sure it will make for a funny story years from now. But, I am almost positive that her Uncle J isn't going to be a fan if she makes that face in all of his wedding photos this weekend.

3. Doodle says funny things all the time. Yesterday, we drove past a house that had an angel statue in the window (it actually looked like a person in costume). Within seconds of seeing it, Doodle asked, "Was that angel a dead person?" I laughed and wanted to tell her that is was. Instead, I asked her what she meant, to which she replied, "You know, did that person die and someone turn them into a statue?" Yes, Doodle. I'm sure that's the case ...
Posted by TMB @ RACING WITH BABES at 9:33 AM

That pirate face is hysterical!

OH the creepy angel? That kills me.... yea Doodle, I feel you on that one. It's exactly the first thing I thought when I saw it.

Temper or not, she is adorable!

I have to ask you, where did you get those pink Mickey headbands for the girls? We leave in 5 weeks for the Princess Half and I think those would be great for our trip. Please let me know when you have a sec.

Omg, the pirate face. My #2 used to do that in all of our pictures. We have a whole series of her looking fierce on our Disney vacation. All of them.

It's much cuter when someone else's kid is doing it all the time :D

she is awesome. spitfire in every way. I love it!

My youngest went through a Richard Nixon on Campaign phase on our cruise to Mexico, in which every pic had him arms outstretched with thumbs up. It was greatness!

Too funny! Does she know she's making that face? Tyler has the worst smile, for pictures only, and he doesn't realize it. We can't get him to "change" it. So frustrating to see a "look" only when the camera comes out.

That face is too cute!! Have fun at the wedding ;)

I really don't like it when my kids yell back at me. I have to take a time out.

funny that kids think anything is possible.

I love the pirate face. I spent years 4-6 sticking out my tongue in all pictures (yes, including wedding pics!)

hahahah, the pirate face kills me!

LOL! The pirate face is so funny!

My neice makes a similar face when she "smiles" for pictures. She was our flower girl and there are very few photos where she isn't making the face. It definitely didn't ruin our photos - I love it! (and I look forward to looking at them with her when she is older...)

Those gleaming red eyes give her away in the cherub picture. :) Adorable pirate face!

yet again i adore your children

that pirate face is classic :)

My friend Sonja and I once played a game of boggle so intense we ended up throwing game pieces at each other. We were 22. hahahahah.

she is so cute. loving the pirate face:)

That pirate face is adorable! :) And being a little competitive might help her career when she's older. You know...high power business woman. ;)

Just getting all caught up!
Loved this post - the pirate eye will make great convo when she get's married ;)

Glad Dizzle is on the mend - very scary! And I hope you are finding peace with your "issue" you mentioned, you're right, sometimes sharing it in blog land doesn't do you much good - but thinking good thoughts for you! Have fun this weekend!

too funny. my sweet J was doing the NO LIP smile for months....we call it the bulldog growl! No worries her sweet smile returned!

Gotta say that face is ADORABLE!!

I love the pirate face!

Love the pirate face. Just get her the eyepatch before the wedding photos and you will be all set.

i love that face! so fabulous. i wonder what she's thinking. or what she thinks it looks like...

love her pirate face -- perfect for some of the rides!

love her pirate face -- perfect for some of the rides!

I am loving the pirate face! Grrrrr!

On a totally side note, Tonia, my siren of the running mommies with whom you are my secret Oprah, LOL, we are going TREADMILL SHOPPING TODAY!!!! My husband has finally agreed to purchase one after I have been gabbing about how very much running has come to mean to me and can we please, please, pretty please with sprinkles on top???? I'll keep ya posted what we come up with, but I had to share the great news! (I"m already pregnant with #3, so how much good news could I possibly get????)

So, my goal right now is to hit up a 5-10K in March, that puts me right before my 3rd trimester, and whenever I think I can't do it, I go back to your story and it inspires me. Thanks for all the awesome writing you do--you ROCK!

I just want to yell "Arrrrrr!" when I see her cute pics!!

Hope Dizzle is feeling better! Kudos to you for following your gut!