1. I am a food journalist. As in, I keep a food journal and have pretty much everyday for the last decade. I feel like it has been a crucial part to my weight loss and maintenance. Over the past few months though, I have become lazy in my food journaling. I didn't monitor my calories as closely as I usually do. Instead, I attempted (rather poorly, I might add) to keep track in my head. As a result, I ended up carrying around an extra six pounds. After stepping off the scale, I immediately decided to go back to hardcore food journaling. And this time, I was going high tech.

I did a little research of online food tracking sites and decided to go with SparkPeople. And now, I am mildly obsessed. This site is fantastic. It's super easy to set up and customize to your preferences. And it does everything for you. You just type in what and how much you ate and it calculates all the nutritional data. After two weeks, I have already dropped two of those unwanted six pounds. And the best part is that there is a SparkPeople app for iPhone and BlackBerry. I am in love ...

2. And speaking of food, I have made a big change in what I am eating. Over the past four weeks, I have transitioned to a pescatarian diet (a vegetarian who eats fish and eggs.) I really wanted to improve the quality of my diet and I've never been a big fan of red meat (I have a take it or leave it attitude towards poultry), so the choice seemed kind of obvious. Plus, as a family, we were already eating several vegetarian meals a week. I'm not sure that I will ever get J to be a total convert, but that doesn't mean I won't try.

3. And on the topic of brainwashing, I'm in the process of converting my children into hardcore runners. Both Dizzle and Doodle have run races before, but they've been on a bit of a hiatus due to the freakishly cold weather. Yesterday, I asked Dizzle if she wanted to go on a run on the TREADMILL to which she replied, "Yes, but can we watch our TV shows like you?"

It seemed like a simple request. So, I dressed the girls in their running skirts, turned on the TV and sent them to run in place. 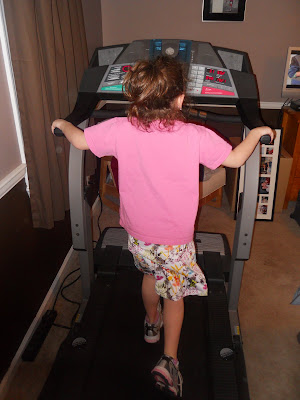 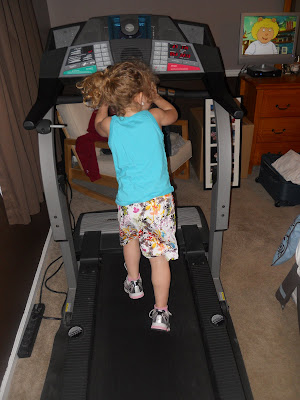 Each of them logged a half mile and were begging for more. I think I just figured out what to do with them when we are all going a little stir-crazy ...
Posted by TMB @ RACING WITH BABES at 8:06 AM

OH where oh where is the LIKE button!!! This is awesome!

I love it!!! They look so cute there! I just joined spark a few weeks ago! I love it! I have an app on my Envy too! It is hard when making recipes but other than that it is a breeze!

I love that you've got your kids on the treadmill. We've had my daughter (3) on a couple of times at a *very* slow walk, but I got all freaked out after I heard about that boxer's kid, so now I store the key thing far away when not in use.

I will have to check out spark people. I used WW for a long time, but they switched everything up and it pissed me off. It was like if I have to relearn everything anyway why not go with something FREE. I'm using MyFitnessPal right now which I've really liked. It's got an Android app and it's very good. I haven't fully committed though ... only been doing it for a few weeks.

I will have to check our sparkpeople..I have used My FitnessPal before and I liked that too. It helps out so much and I love how all those sites have such a large food library that it is next to impossible to have eaten something that isn''t already in their data bases.

You girls running are great. I would like to set up an arranged marriage btwn my 4 year old and one of your girls...Oscar ran a 1 miler last spring when he was 3 and I am hoping to get him back on the racing bandwagon soon! He is coming off of a broken leg this fall and is finally running without limp.

If only you could get them to clean your house with that kind of enthusiasm! :-)
I big on the food journaling too which is why I'm doing WW right now.

I too have to log my food intake otherwise my weight will creep, actually JUMP up..I use www.dailyplate.com from Livestrong website. You should check it out!

I think I need a treadmill... I would do anything to combat stir craziness! Your girls are so adorable.

i need to check that link out!

love that you're trying new things. i tried going raw, then tried vegetarian then pescatarian...i'm back to eating everything! :) but i enjoyed it while it lasted. good luck!

Thanks for teaching me the word pescatarian. My husband decided to be a vegetarian (Tuesday, at noon, after I had made freezer dinners for a month and gone grocery shopping).
Yesterday he said he ate fish, I told him he wasn't a vegetarian anymore. Now I know what he is, besides a pain in my butt.

OH my gosh, you are BRILLIANT! As for the food journaling, everytime I have tried, I've been totally horrified by what I find! LOL. I'd rather just stick my head in teh sand. Besdies, that's what running is for--to burn off all those cupcakes, rigth? (Or in my cases, multiple boxes of Entemann's Choc Chip cookies--I swear, they come from the devil himself!!!!!)

I haven't gone high tech yet, but I also keep a food journal. It really helps me see what I've been eating. Love the girls on the treadmill!

Great idea! I need to get my kids on my treadmill. I will check out the spark site. I've got 10 pounds I want to lose and can't!!!!

SOOO ADORABLE!! I need an EASY food journaling website, lord knows I have enough places to log in. CONGRATS on the 2 lbs..

Love the little ladies in their running skirts..

I've never tracked my food - too lazy, but even just really paying attention and thinking about it lately is paying off for me. Congrats on the loss!

Sooo cute! Kids on treadmills crack me up everytime.

I was a vegetarian for awhile, and keep intending to go back, but... I'm lazy.

Same for sparkpeople. It looks kind of intimidating. :D

Nice job with the kids! I would never imagine children having the desire to be on the treadmill, but I guess it is all imitation.

i'm checking that website on my next click...i'm a believer in food journals - just hate doing them... :)

i sooo need a treadmill for my 3 year old - i need to wear him out somehow! :) cute girls!

I used Sparkpeople for a few years, and only lately have stopped using it. Great site though!

That is awesome and adorable. I love that they have running skirts!

A food journal is a great and scary idea. I'm embarrassed already so maybe the thought would keep me from eating stuff I shouldn't.

The girls on the treadmill are too cute. Another great idea :)

Thanks for sharing Sparkpeople! :)

Now, if only you could get them in Tandem and go at the same time.

I cannot believe that you put them on the Mill... what a GENIUS idea!

T Junior couldn't wait to try the "tchead-meel." But afterward he was a little freaked out, which I'm okay with for now. :)

SparkPeople is awesome. I have used it to lose 26 pounds since September 12 (a week or so after you started coaching me, which is part of the weight loss too, of course!) An awesome thing about SP that is not immediately obvious: if you tend to eat similar foods together, you can create a Food Grouping- voila, one drop-down item and your entire meal is entered. But even better, you can create a Food Grouping simply by copying a meal you've already entered. Just pick "Copy this meal to another day" from the calendar. At the bottom of the pop-up you will see the option to "Make this meal a food grouping." Sooo easy. You may have already figured this out, but it took me a few months to notice it. It makes the entries almost effortless! Loooove SparkPeople.

I just started using caloriecount, and really like it, my main problem is sticking with the logging. I am usually really good starting out and then slowly quit.

BTW, I am a stalker and tagged you over on my blog :)

My girls love running on the treadmill, too! Funny the kids love, huh?

I love that your kids are on the treadmill. I think my son would love it if we had one. My kids have each done a 5K and my daughter is doing the Disneyland 5K in September when I do my first half marathon. So fun to train with them.

Love it!! I am all for getting their energy out on the treadmill if they want to run. I love the pics!!

If only you could hook that treadmill up to a generator and they could make the electricity that's needed to power the tv.

yeah i need to get back to keeping track. yesterday i ate not one but TWO cupcakes on my own. Bad idea! I am slowly trying to give up red meat. I don't eat a ton of it but the occasional filet is amazing in my book. although i don't know that I could ever give up chicken...i love it too much!

hey there,
I am on spark people too. I just joined but cant find you. Strangely, there are a few Tonia's that are local. Find me...

Thanks for the info on the SparkPeople. My goal is to lose 10 lbs before my first marathon, May 15th. I did maintain a food journal last year during the year of weight loss ... but have gotten away from the paper and pencil and gained 10 pounds.

Now with the computer and IPod Touch, it's almost effortless.

What's your user name and I'll enter it in the referral for some points for ya.

Thanks for the advise on Spark People. i will be getting that app like right now. I am a lifetime member of WW and found that journaling is key to keep my weight off as well. I love the idea of putting the kids on the treadmill. I don't have one at home but just might have to spring for one for that benefit alone :)

I love Sparkpeople!!! I have used it on and off for years but have been tracking online daily for a few months now. Love it!

And BRILLIANT putting the girls on the treadmill!