Do you see this face? 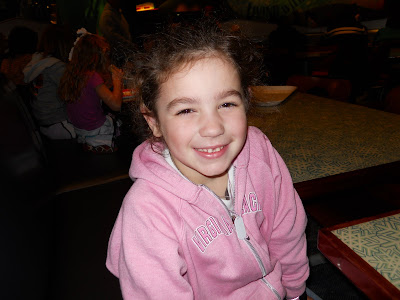 On Friday, I took Dizzle to the doctor. Other than the fever, we couldn't really pinpoint what was wrong with her, but we (J and I) knew something was up. She was complaining about a stomach ache and leg pain every once in a while, but nothing that was stopping her from acting like a normal five-year-old.

When we got to the pediatrician's office, they did a battery of test, all with normal results. The doctor suspected a UTI, but would need 2-3 days for the results. Dizzle was to start antibiotics and I was to treat her fever, if necessary.

Over the course of the weekend, Dizzle didn't improve. She spent much of her time lying on the couch, not eating. She didn't seem to have worsening symptoms, but we just couldn't get the fever to break. Then on Monday, she woke up with a cough.

I decided to give her another day to rest. Her fever had slowly crept from 105 to 102 and I suspected that she was on the mend. But I was wrong, when Tuesday rolled around. Her cough was horrendous and her fever was back to 103. Back to the doctor. Again.

When we arrived at the doctor's office, I was getting the "crazy" looks. You know, the ones mothers get when they are freaking out over a paper cut. When the doctors all "know" it's just a virus and the mother thinks it's the Plague.

Anyway, they started by weighing Dizzle. She was down 1.5 pounds in four days. Right then, I knew something wasn't right. Then, they retested her for all of the things they looked for four days prior. No flu. No strep. No UTI.

With no clear diagnosis, they were about to give her a different medicine and send us on our way. That's when I said this ...

"Five day long fevers just don't happen. Her body is fighting something. We just have to figure out what. I had to bring her back to see what, because I would hate to miss something like, um, I don't know. Pneumonia."

The doctor looked at me and said, "Well, you know sometimes lung infections can present with stomach pain. Her lungs sound clear, but let's send you for a chest x-ray anyway. Go get it taken and go home. I will call you when her prescription is ready."

So, we went. Dizzle had her x-ray and I was about to leave. But then the x-ray technician came out and told us that we had to go back to the doctor's office. Fan-freakin-tastic!

We walked into the exam room and the first thing the doctor said to me was, "Did they tell you? You were right. She has PNEUMONIA."

Are you kidding me? That was a joke. Her lungs sounded fine. I could not believe it.

Before I knew it, three people were holding Dizzle down to give her two high-dose antibiotic shots in her legs. She was in complete freak out mode. It was sheer craziness.

But the real kicker was that if I hadn't pushed the issue and made them look deeper, we still wouldn't have a diagnosis and Dizzle would be chillin' on my couch with a 105 degree fever. And that's why you have to ALWAYS follow your gut ...
Posted by TMB @ RACING WITH BABES at 8:07 AM

Thats insane! But I'm glad you followed your mommy instincts and soon Dizzle will be back to her old self

Yes yes yes yes. Sometimes we just KNOW. Baby didn't have any real symptoms, besides a cough she couldn't kick. Everyone I asked told me I was being paranoid. I mean. I took her to the dr two weeks before and it was just the cold working itself out. Right? Who takes their kid to urgent care on a holiday because she's sleeping a lot?

But sometimes, you just know something isn't right.

holy cow! That is nuts that the Dr. almost completely over looked it! Dizzle is definitely lucky to have you fighting in her corner!

Good call, T! Dizzle will be back to her old cheerful self before you know it!

105 degree fever is really dangerous! I can't believe they were not making a bigger deal of this...

Wow!! Your smart and very lucky to have a doc who would listen to you!!! Happy recovery to her!

Hope your little darling is on the mend very soon.

Oh no! I hope she starts feeling better soon and so glad that you guys figured it out!

Jeesh, good call, mom! Poor Dizzle! Hope she is feeling okay! My little cousin who is 3 also has pneumonia now. When i was a kid (and still now) i never showed symptoms for anything!! i even had Scarlet Fever once and the only reason we found out was bc i had a weird rash on my hands. kinda scary, never want to overlook anything, always better to play it safe! Hope she is doing well!

You definitely get the Mom of the Year Award! Hope she feels better soon.

geez. good for you!! hope she is feeling better soon!

And uh-oh because my 8 year old is on day 3 of fever with no real symptoms other than tummyache and achy arms and legs. Ugh.

That is crazy and scary. Moms always know best. Hope she gets to feeling better soon.

There is nothing like mama intuition. I hope she's up and raising heck soon!

Medical care HAS to be a joint effort. Doctors are not super heros by any stretch! Although my father died of lung cancer, I know that he got better care because my sister's and I fought for him. I spent days researching drugs and treatments only to have the doctor NOT know about some of the things I told him. I realized through that experince that health care has to start first with the patient and family.

Good luck kicking Pneumonia having had it more times than I can count, I know it's tough esp. on little kids. Great job mom being a warrior for your little one!

Always trust that mother's intuition! Glad you insisted on further testing and a diagnosis/treatment. I hope Dizzle is on the mend! Poor thing...

How scary. Yes, follow that motherly intuition for sure! I know that feeling where everyone is looking at you like you're a crazy overly concerned mom...I always want to shout "just trust me!! I know my kid". And the shot part...poor thing. :( Hope she is well so so so soon!

Both mine and Dave's Dad's died of complications from Pnemonia.. IT IS SERIOUS stuff and haunts me..

So glad you figured it out and fought for attention.. Get your little girl healthy.. Were you or other family exposed? Isn't it contagious?

Mom's know.
Glad you pushed it.

Dr. Mom to the rescue!

I'm so glad you followed your gut and spoke up. I hope she is feeling better soon.

Good for you for speaking up! It can be so easy to be intimidated into silence.

Good for you. I'm glad you trusted your instincts.

You are definitely in the running for Mother of the Year!

Soooo frustrating when the doctors seem to just pass you off... especially if she's been sick with those high fevers so long. My poor 5 month old was hospitalized over Christmas with flu and pneumonia. But thank heavens the antibiotics finally got him recovering. Hope she's back to her happy self soon!

Poor Dizzle. That had to be horrible for her. I hope she kicks the pneumonia really fast!

And I think you deserve some sort of discount with the doctor since you were actually the one to do the diagnosis!

Isn't it wild how we moms just know when something isn't right?! Good for you for trusting yourself and speaking up. I hope she feels better soon!

So glad she is feeling better! I love it when families and their docs work together as a team. Medicine isn't always cut and dry. That is why it is called the "art of medicine." :)

Way to go with the mom gut!

Poor little girl!!! I'm glad you finally found out what it is and I hope she feels better.

Poor kiddo. I have learned to trust my gut and find a doctor's office who doesn't give me "the look." Find a doctor that doesn't need YOU to diagnose a major problem like this! How horrible! Good for you for sticking to your guns and fighting for your kid--you rock!

I'm a pediatrician, and moms totally know their kids. When a mom comes in and says, "Something is not right" it usually has my mind somewhat in a panic. Because most of the time mom's are right.
I hope I never give anyone the crazy look EVER! I love my families because I know they will call or come back if things are not going well. Hang in there!

how scary! i'm so glad that you did push and follow your gut. glad that they got it figured out.