not quite a recovery run ...

Did you ever have one of those runs where you kind of forget that you are running and suddenly you are done? Well, that was my "recovery" run today. I met up with D and K for five miles this morning. Here we are pre-run looking, um, less than awake. (I know I cut out half of K's face, but I thought it was more authentic that way). 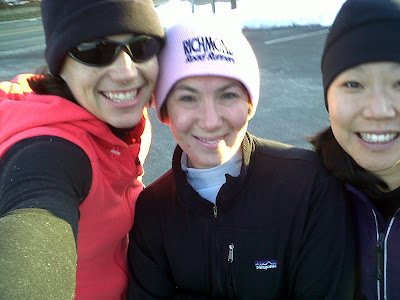 Now, K and D are speedy (K has competed in Worlds in the duathlon). But usually, they just run whatever pace I set. (I kind of have a way of setting my group's pace. Not sure how that always happens.) So, I figured that we'd run 9:30-10:00 miles, not really in the recovery zone, but not hard either. But, that didn't quite happen. Instead, we ran negative splits for the five miles, posting an 8:36 last mile. It was awesome. (And, yes, I was still the one who set the pace.) I just love runs like that. I feel so energized afterwards.
I also needed this run, because my running mates helped to put my head back on straight. They managed to talk me down from the "run two half marathons in a week and blow your Disney PR" cliff I have been on. They know that I won't just run the first race as a "training run." (I knew that too. I just didn't want to say it.) So, instead, I think I am going to run a 3 miler with G. I've gained a lot of speed in the past few months and I've never run a 3 miler, so it would be an instant PR.
As for the Fanatic thing, I have a couple options. I am registered for the Georgia Half on March 21. My trip to GA got cancelled, so I wasn't going to run. But I might just head down there and do it anyway. Or, I have until April 18 to get the three in 90 days, so I could always find another local race to run. Or, I might just wait until next year and take MCM Mama's suggestion and do two in one weekend here in VA. (I'm kind of bummed that the weekend she told me about doesn't work for me this year).
The point is, I'll get it. I'm just not going to rush into it, as I have been know to do ...
Posted by TMB @ RACING WITH BABES at 10:50 AM

Great job on the "recovery" run! I'm glad you made you decision...sounds very sensible to me. No need to rush...everything will indeed happen :)

Unbelievable recovery run! I wish I could run that pace on any run to say nothing about recovery. Good for you. I need to go look at the fanatic thing. I love halves.

I'm glad you posted this. I was struggling with the same thing! I have until April 8th to find one more (other than the Princess) and it just doesn't look like its gunna happen =( oh well...there's always next time

Whatever you decide will work out. I have faith. :)

If you decide on a half that's within a couple of hours of the DC area, I could probably be persuaded to join you. And you are right - the Fanatics will still be there next year.

Glad you made a confident decision about the races. You are going to do great!

Check you out! Nice run!

So happy you had a great run and were able to clear your head and make what sounds like a great decision not to race before Disney. Although you are inspiring, I am glad you are being realistic in your goals. You will get exactly what you need and I will be proud to hear about it!

T, check out my blog, I've tagged you to receive a new award :)

Look at that "recovery pace!" Awesome! You know how to pick 'em :)
Glad you were able to come to a decision about the fanatic thing - I had to do that last year with marathon maniacs and I am not disapointed at all - it was the right decision for me all along :)
Happy Monday!

Good luck with your "Fanatics" goal!

I love those runs, too! When you are just motivated to run BIG. Good for you!

I'm hooking up with the Fanatics, too! I've got 2 halfs (halves? ha) in March within 2 weeks of each other and another one in April so I'll be fitting both criteria for Neptune. I'm hoping next year I can join the Maniacs, too.

I'm sure you are already thinking of which skirt you'll wear with your new fanatics shirt. ;)