sometimes, it starts with a fall ...

Thursdays have a reputation of being a bit of a challenge for me. I'm constantly running around like a chicken with her head cut off. Usually, by 5 p.m., I am ready for EVERYONE in my house to be tucked away in bed. But in the past few months, I have been trying to simplify my life. Preserving the things that I hold closest to my heart and eliminating the things that are, well let's just say, less important. And this has paid off. I have greatly reduced the amount of stress in my life, which makes everyone around here happier.
Until yesterday. Yesterday was a completely different story.
I probably should have known it was coming. I was scheduled to work in the classroom at the girls' preschool. That means that we need to be there even earlier than usual. And the girls (a.k.a. my alarm clock) woke up late. This left me scrabbling for help. Fortunately, J hadn't left for his business trip, because his help got me out of the door only two minutes behind schedule.
I had planned on squeezing in my run after I dropped off the girls (I needed to be back there at 10:40 to be in the class), but on my way there it occurred to me that Doodle's birthday party was Friday afternoon. As in one day away. And I had done NOTHING. The house was a mess. Nothing was prepped. I hadn't even figured out what we were going to do at said party. So, I changed my mind and headed home with Dilly. I put her down for a nap and tried to get organized. It kind of worked. But Dilly wasn't really cooperating.
45 minutes later we headed back to the preschool (it's a 20 minute drive from our house), and things calmed down. I was mentally prepping for the afternoon and all I had to accomplish. We were seconds away from leaving school, when Doodle had to go to the bathroom. I ran back in with her and left Dizzle with friends on the playground (hers and mine). The next thing I know, I hear crying. And I am positive that it is coming from my child. I lifted my head to find the President of the school with a crying Dizzle, who had, and I quote "taken a pretty hard fall."
FANTASTIC! I cleaned her up and headed out to the car. But on the way, I realized that she was holding her arm weird. All up against her body. And she was favoring the other side. I had seen that behavior before. It was last January. Also after a "pretty hard fall." That time, she ended up looking like this: (For the story click HERE) 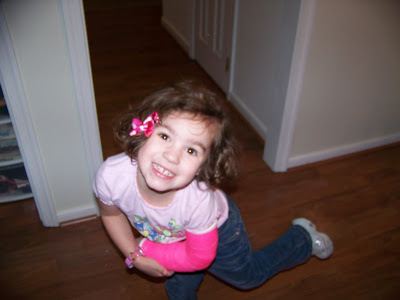 Um, yeah. Fun, right? Long story short, I called up G. Asked her if she could take my other kids. And took Dizzle to the ER. This time, she ended up looking like this: 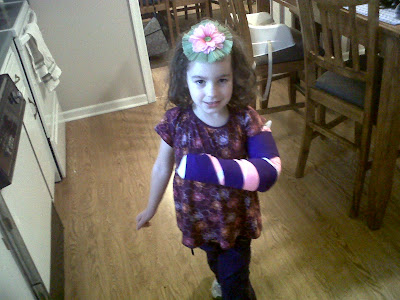 And again, they told me it was not broken BUT elbows fractures are really hard to read, especially on someone her size. (SHOCKER!!) So, we should have a follow up appointment in a couple days to get another read (in January, this follow-up appointment showed a break). Until then she is rocking a soft cast.
Things got better after that. Doodle only threw a 10 minute tantrum when leaving G's (biting, hitting and pinching included). It was super! I was half expecting G to rip me away from Doodle and strap her in her car seat for me. Eventually, I got her in. But the screaming continued. THE.ENTIRE.WAY.HOME. It was 5 p.m. and I was so DONE.
Sick and tired of all the whining, I fed them all and put them in bed. EARLY. At which point, I headed to my treadmill. I needed to burn off some steam. And I did. 6.2 miles in 50:38. Hardest run of my life. (But, that's just a teaser. More on that run at a later date.)
It was a long day. Ever since Dizzle fell, I felt like I, too, was falling into that abyss called negativity. The party is still not planned. Nothing is done. I've barely cleaned. I kind of feel like today is going to be a climb ...
Posted by TMB @ RACING WITH BABES at 7:31 AM

We all have days that can compare... and it is exhausting. A little humor: make it a cleaning themed birthday party. LOL!

Wow, what a tough day you had yesterday. Hopefully today will be 10xs easier! And if not, just kill another 10K!

awww man! Those are the hardest mommy days. I spent last night in the ER with one of my babies too. No fun! Hope she heals fast!

No, I wasn't going to rip her away from you and strap her into the seat... I did consider putting Heidi in her lap for a minute there because I think A) Heidi would have licked her into submission and B) she would have frozen with shock and fear. //for those who don't know, Doodle is NOT a fan of dogs, even 11 pound dogs//.
Today is a NEW DAY.

I know the feeling your talking about. Just take a deep breath and it will all work out. Good luck!

OMG I was coming over to say congrats on the speedy 10k but I'm so sorry for the reason behind it! Poor Dizz! It's all so overwhelming--here's to everything settling down for you soon!

some days just really bite!! As for the party if it is a bunch a 3 year olds put out a few crafts let them decorate a cupcake and let them play they will be stoked!! Order pizza put out some fruit and call it a day!
Things always get crazy when daddy leaves town! Hang in there it is going to be a great weekend!

Awww, poor thing...you and Dizzle. Sometimes you have one of those days and they suck but try not to let it get to you because it will pass....or you could always pour yourself a glass of wine. :)
Hope today is better for you.

Oh man! I hope she gets better soon! I hate when the kids get hurt. I hope you have a great weekend!

Ooh tough Thursday! But you're going to get everything done and the party is going to be great! Positive thinking :0)

Awww, poor girl. I hope she gets better, and if she has to get another hard cast I hope it's PINK!! :)

wow, I felt overwhelmed just hearing about your day. Here's to hoping Friday & the bday party bring the fun out of Thursday's Funky:)

I hope it's not broken, and I hope everything comes together for you today.

Big hugs! I have been there and I know how overwhelming it all feels. It WILL get better though! Keep on keepin on. :)

Big big hugs! I hope today is better.
I hope the party is great.

You are such a hardcore mamma for getting through that without killing any of them! It will all get done - that I am certain.
Great job on the fast 10K!
Hope Friday is better :)

Oh no! What a crazy and hard day! Hugs to you and your kids! And go for you for being able to left off some steam and get in a great run!

As always though, you'll get through it and probably do a great job with the party...see that's the problem with being a mom, we always get it done...so why say no :)

What a stressful day! Oh the joys of motherhood! I hope you slept well . . . sometimes nothing calms be better than a good night's rest!

Wow thanks for today's daily dose of birth control :) You're such a great mom though, and awesome run! Hey, whatever gets you motivated right?

Ok, so you have more endurance and spunk than I but I do remember making it through days like that and just plugging along in a fog. Some how we all make it through and at least you have a GREAT sense of humor. Even though my kiddos are gone, I LOVE reading your stories because it brings me back to those "fun" days that passed way too fast. Hold on, laugh and hang on for the ride!!

hahaha don't worry T, you and Erin got some massive extra brownie points for finding entries =) Plus, I think the runningskirts gods owe u a favor or something

Wow! I hope things turned around. What a day! How is Dizzle?

Awwww....what a crapy day! I hope things are better. I feel for ya!

oooh! lots of hugs and kisses! i hope everyone is doing better. the pictures of her do look precious. glad that you were able to run...and burn off alot of that emotion.

Poor Dizzle! Poor you! :( I hope yesterday was better!