i have my running partner back!!!

I have had a void in my life. A void that could only be filled by one person. My running partner, G.
We have been running together a few times a week for almost two years. If one of us can't make a long run, the other one reschedules so that we won't have to run alone. We coordinate our race outfits. We are in this together. Well, at least that was the case until the marathon. Because, like me, G suffered an injury. Her injury, however, was more severe and she has been banned from running since the end of November.
But SHE'S FINALLY BACK!! So, after doing a happy dance this morning, I joined G for a short CORE run (as prescribed by her doc). I knew we were going to have to run according to her terms. And I was cool with that. It was going to be a bonus run for me, so I had no problem taking it easy and to be honest, I really just wanted to run with her.
We met at her place (me, with stroller in tow). The plan was for 3 miles with core work mixed in. We ran for about half a mile, stopping on the side of the road for G to stretch. I took pictures just in case a certain Witch Doctor ever needs proof that she is following doctor's orders. 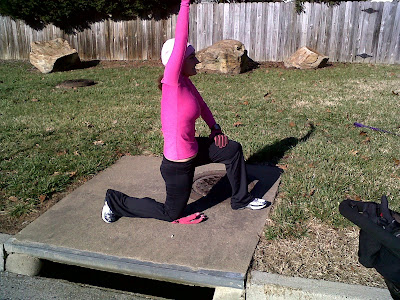 After she was done, we started running again. Then around a mile, we stopped for two minutes of planks and more stretching. 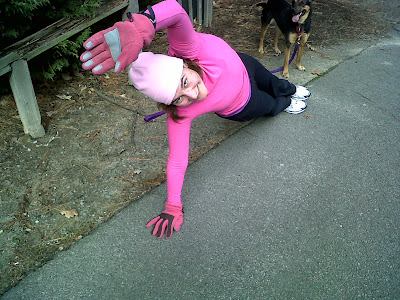 Planks always stink, but they are WAY HARDER when you are stopping in the middle of a run and when you have to rest your hands on the street. Ouch! We repeated this process for the rest of the run and G made it 2.25 miles before the knee called it quits! This is huge progress. And surprisingly, I really liked this core run thing. I may just have to add it into my normal routine.
Isn't having a running buddy the best?
Posted by TMB @ RACING WITH BABES at 2:30 PM

we are STRANGELY psychic. Really. But now, we need to figure out how to use this power for GOOD! Thanks for posting, wow, I do look skinny.

Looks like a fantastic day for a run with a friend! Loving the new header pic, too, by the way. :)

That sounds like a great recovery run for the rest of us! And I am jealous, you have your running buddy back and I am still sans running buddy. Enjoy it!

How great to have your running buddy back! Great pictures!

What a fun idea to incorporate some ab work into the run. And YAY to having G back!

I love the concept! I am going to start putting core runs into the schedule...

seriously - I didn't read yours until AFTER I had written mine.

Ahhh, the pleasure and joy of a running buddy. Coaching allows me many and I bond with everyone of them I run with. Right now, coaching a group of Richmond homeless that want to run, my heart is full. Although I still have my fav, which is Judy and completes Team Dudy (Dee + Judy = Team Dudy)- I agree there is NOTHING better than any run, slow or fast, core or whatever, with your bestest running pal.

It's so great that you have your partner back! I love the side plank pic - totally hard core.

It's so nice to have a running partner...I'm so happy for you and yay G! Great pics :)

I am QUICKLY becoming someone who does not like to run alone. I LOVE LOVE my running buddies!!

So happy miss G is back..

Oh my gosh an ab work out on a run- thats intense! Yay for having your running buddy back

I just got my running buddy back too! I think I will have to try that core running :-)