On Saturday, a mere 24 hours before I wrecked my shoulder, Dizzle and I ran the Ashland Railroad 5K, Dizzle's first.

We had learned at packet pickup that Dizzle (age 5) was the youngest registered runner and one of three people ages 9 and under. So, of course had they been recording everyone's times, she would have walked away with some bling. (Apparently, only the 10K was worth timing.)

Anyway, we got dressed in our Running Skirts and Tough Chik tees and headed to the race. 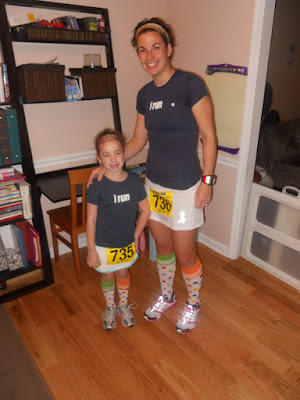 Dizzle was excited. And smiley. Until five minutes before the race. Suddenly, she didn't want to run and I was the worst mom ever. I told her that we paid for the race, so she was going to run. 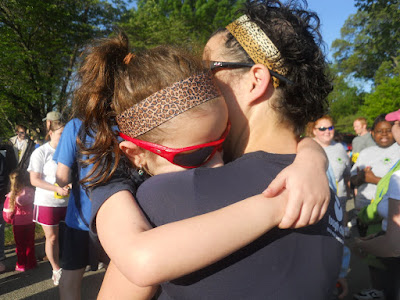 She reluctantly agreed. At 8 a.m., we were off. 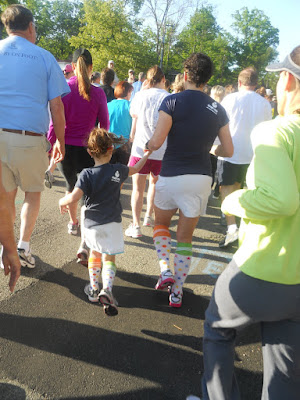 When we got to the mile 3 sign, she suddenly felt fine. She ran right along with her perfect form. 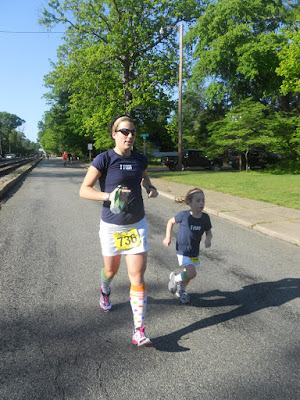 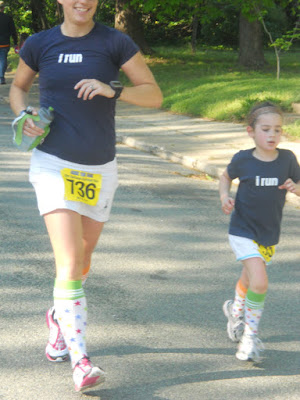 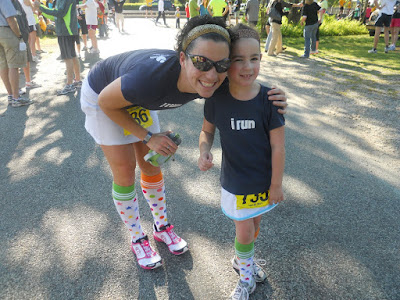 Your mini-me is too cute!! I can't believe she ran the whole race!! CONGRATULATIONS!!!

Wow! What a super star! A little runner in the making :)

Congratulations to Dizzle for an amazing run,and I hope your feeling a little better.

What a great lesson she learnt. Things that are really hard to do are really satisfying to complete.

How stinking cute! You girls looked great! Congrats to Dizzle!!

WAY TO GO DIZZLE!!! What a little rockstar! My little one ran her first 5K this weekend as well.

So cute! My little girl ( 7 in 2 weeks) is running her 2nd 5k next weekend. Her race pics from last year are hilarious.... she looked miserable, but she can't wait to do it again!

you guys look too freaking cute! congrats to Dizzle on her first race! she looked awesome!

That is so awesome... you girls looked so cute! A real mini-me. High five Dizzle!!

Awww, I love it. You two matched right down to the socks. I really hope I can do stuff like this with my daughter one day. It's so heartwarming to see you racing side by side, and both with huge smiles. Congrats!

Seriously. That has to be the CUTEST THING EVER! I want to make Addy run a race now! That has to be the worst feeling in the world, your daughter complaining and saying you MADE her do something. Ugh. I would feel like the worst parent ever, until she crossed the finish line and said it was awesome. :)

That's so cute! I can't wait until my daughter can run a 5k. I'll have to start working with her. She has the interest, I just don't want a meltdown halfway through!

I kind of love that you "made" her do it. Parents don't seem to make their kids do anything anymore, even if it's for their own good. I always feel like the mean mom on the playground. I love choices as much as the next girl, but sometimes you gotta do what you gotta do. Congrats to Dizzle. Definitely something to be proud of.

LOVE your outfits!! second, YAY mom and YAY dizzle!! Yay that you made her do it because that smile at the end, I'm sure was worth every whine during the race!! Dizzle, you rock!! VERY few 5 year olds could do what you did!! way to go!!

That's so awesome! You guys looked great too!!

So cute! Love that your family is so into this ...even if there is some forcing in the end. I never had this growing up so am soaking it all in now.

So cute! Love the matching outfits.. I can't wait to sign my boys up for races! (It'll be awhile!) :)

You are both adorable! Congrats to Dizzle!! That is a killer time for a 5 year old! Holy crap.

The question is, will she run another 5K?

That is soooo awesome!! What kind of training do you do with her? I know my son can do it if he works on his distance, but I don't know where to start with him!

She is strong! Our 5 year old barely makes it a lap and gets bored..

She has amazing form.. WOW!

Congrats. What a cutie!

So we both know I'm an emotional wreck right now, but this is awesome! Tears in my eyes, awesome! I can't see the pictures on our home computer, but I'm sure they are just as amazing as the story! Way to go, Dizzle and way to go, Miss T!!

Love the shirts, I'm so ordering one this week.
Dizzle is a rockstar, like her Mama! So sorry about your injury on Sunday...

Wow! Parenting at it's best. Folks hearing her scream and thinking you forced her to run. "No I swear! She wanted to do this!"

Love it! Congrats to little Dizzle!! And honestly, who doesn't hate racing until mile 3? :)

Oh my goodness, I am in LOVE with the matching outfits! That is so awesome.
Congrats to her!! She is amazing!

Dizzle rocks! My daughter did her first race with me at Monument Ave 10k. She walked/ran with me because I was injured...but now she is hooked. Looking at doing the 8k in November together but this time we will run.

Congrats to you and your Dizzle!

She is so cute! My 7 yr old complains on EVERY training run he does for the 8K he did and the one he will do in a few weeks. Luckily, he does not complain at all during the race.

Congratulations to you both! So impressive to have the drive to continue (through the complaints).

There was a young girl not as young as Dizzle (actually several but I only talked to one) at the trail 10 miler. She and her mom did the 5 mile options. Dressed super cute in their skirts. She ran it in 52 minutes. So amazing to see such young kids getting out there.

Woohoo! Congrats to Dizzle! I loved your matching outfits...so cute!

Adorable! And what a great time! I love the matchy, matchy :D

wow !! i am thinking of seeing if my two girls want to do a mile run with me this sunday. i am scared they will jsut complain the entire time ??? they are 4 and 6

You two are so cute!

what a great run! You both rock!

glad that she made it through and was smiling at the end. that's what counts, right?

She's so SUPER cute! Kudos to both of you for a great race.

Amazing! You are a strong and inspiring girl, Dizzle!!! Keep running.

In the fifth picture, she is LITERALLY a miniature you! Yes, she has the same leg out (bound to happen), but look at the arm swing! Same horizontal position of the left arm and the right hand comes just above the hip!

You've certainly taught her to run!

Yay, Dizzle! Is she ready for her next one?!?