so remember that trip I mentioned?

Well, we're back and now that I have FINALLY had the chance to regroup, here's how it went. Overall, really good. It was nice to see everyone back home. Most of them had only met Doodle once, and some, never. My grandmother gave us numerous examples of her craziness, Doodle became one with the Lord, and we sweated our way through G's graduation. I saw the perfect example of why disciplining your children is important and ate more crap in one weekend than I have in the first six months of this year.

So, let's start with my grandmother's craziness. The first afternoon I was there, Grandma was at my Aunt's house (which is on my mom's property) when she turns to her sister and says, "H, look at that blue car. It's Dad. He's slowing down to say hello." (Can I just mention Poppy passed away over 10 years ago?) H then replied with a confused look, "Who?" And Grams is like, "You know, Dad. Pop." And we all just kind of looked at her. No one was really sure if she was "seeing things" or if she was making some sort of joke. Either way, it was funny to witness.
Grams followed up this performance at Doodle's christening when she told me the story of the time she and one of her friends took my twin cousins (now 30) into the bathroom, turned on the tub, threw some water on their heads and said, "In the name of the Lord." And as she put it, "Baptized them on the spot." I laughed and thought, "Boy, she was even crazy back then." She followed her story with an offer to do the same for Doodle. She said she would even go home and get "her collar." Does anyone else see the coo-coo birds?
This is not to say that we didn't have our fair share of fun with the christening. We did. In fact, G, Doodle's Godmother, came up with this message for the cake. 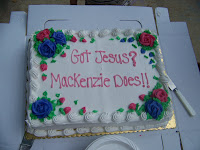 Seriously, I sometimes wonder if we all aren't on crack.

On Sunday, we celebrated Father's Day (and G's graduation) with lunch at my most favorite Italian restaurant, Tony's Pasta House. For real, if you are ever in TR you need to eat there. The bread is to die for.

Then came G's graduation. With the threat of thunderstorms, and I say threat because they never materialized, the ceremony got moved inside our 118 year old, air-conditionless high school. This meant that G only got three tickets (we had to beg, borrow and steal two more so that the girls could come). Anyway, 800 guests and over 300 graduating seniors were shoved into a hot and sticky gymnasium for two hours just to see the graduates receive an empty diploma case. Apparently, you have to pick up the actual diploma later. But while it was disgusting and smelly in the gym, I was so happy (and proud) to see my baby sister receive that empty case and flip her tassel. It was worth every sticky second and the twelve bathroom trips Dizzle needed to take to witness it. 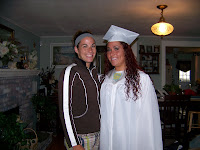 So all sweaty and gross, we headed back to the car for the six hour trip home. The girls fell asleep almost instantly and other than having to drive through one serious storm near Fredricksburg, the drive was rather pleasant. All-in-all, I would say the trip was a success.

Labels: the fam, the girls

Okay, that cake just says it all! The whole family must have been in hysterics. Hope to see you and the girls soon. Meredeth:)